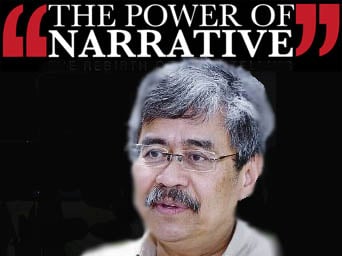 HOW do incentives work?  The answer may lie in what stories we tell ourselves.

We have looked at how narratives affect the way we look in the mirror.  People make up stories all the time, and I am not saying this in disparagement but as a clue to how we answer the question of who we are, which is important, because people who do not know their identity are lost.

We are storytellers, always looking for narratives to make sense of ourselves, consciously or unconsciously, and on these narrations do we build our autobiography.

Our forefathers knew the importance of narratives when they told us stories to embed in us strong values, when they wanted us to follow a certain way.

That was folk wisdom gathered in our collective unconscious, so powerful that it is now worthy of proper scientific investigation.

Yes, we did take a look in Elsewhere before at the United States Defence Advanced Research Projects Agency — DARPA’s — interest in the neurobiology of narratives, how they affect the minds of people.

It is knowledge that has been known to writers from time immemorial, how writing takes on an effective reality.  Some, who are aware of the practical uses of this, are experimenting with bibliotherapy.

It isn’t, in fact, altogether new.

They have been aware of this all along in the various schools of therapy.

Many self-help books will tell you that, including Neuro-Linguistic Programming’s (NLP’s) re-framing theory, which is personal story-telling in a way that will benefit you, even if you didn’t know that there was a story.

“These stories aren’t necessarily conscious, but they are the narratives by which we live our lives,” says Timothy D. Wilson in his Scientific American interview.

Story-telling is important to Wilson, a professor of psychology at the University of Virginia.

He and two other colleagues from academia took a storytelling approach in their renowned undergraduates textbook on social psychology.

The difference between Wilson and the “I told you so” crowd is that Wilson looks at the efficacy of theories with the detached eye of a scientist, so that makes him a fish in a different kettle from the intuitive, enthusiasm-filled one that is brimming over on the self-help guru’s raging fire.

He pours scorn on the self-help, new age charlatanism, even if, as we have seen above, there may be coincidental truths between what Wilson has discovered and what has been said, although anecdotal, by those folk whose cauldron are brimming over.

We’ll have to make allowances for that: scientists have to tell a different story.

Wilson accepts though that psychotherapy approaches, such as Cognitive Behavioural Therapy (CBT), can be effective in dealing with problems but he feels that social psychologists have found an even simpler way.

He calls it “story editing”, where people are encouraged to re-edit their stories to effect personal change.  This is how he explains it in his Scientific American interview:

“There are a variety of ways of doing this.  In one, called “story prompting”, people are given information that suggests a new way of interpreting their situation.

“This is particularly effective when people haven’t settled on the narrative they will tell about what is happening to them.”

This is the approach that he suggests in his new book, Redirect, simple “re-editing” methods that may change results where methods in progress clearly do not work.

The book gives many examples of government programmes in the United States that are on-going but are as good as useless.

For these programmes to succeed, says Wilson, we have to change the way people understand their stories, past or present.

He gives a simple example in the interview.  Economists, he says, are fond of giving rewards as incentives, but this can change people’s stories in unintended ways.

Giving huge rewards to students for studying hard may have the effect of making them think that they are only doing it for the reward and lose their focus on the importance of the subject being taught.

A more common one is of frightening children into being good.

We see programmes like this around us: taking children on visits to prisons, or to addiction centres, for example.

This may make the children think that they are that way inclined anyway, and studies have shown that some end up doing just that.

What makes “re-editing” so profound is that it can change behaviour more effectively than carrot-and-stick will.

An experiment shows that low achievers re-edit their stories when they are shown proof that others like them can make good progress.

It has been proven that children who are encouraged to do voluntary work will turn their personal stories in them that they are good, helpful people.  It is also a method that will work for fostering inter-ethnic harmony.

Personal stories can also be changed by “story prompting,” which is why mentoring, done skillfully, can be so useful.

Wan A Hulaimi is the author of the best-selling book “A Map of Terengganu”. He may be reached at [email protected]

Brother Blue and Francelia Butler knew of this, and refined it as living art.