Welcome To The USA 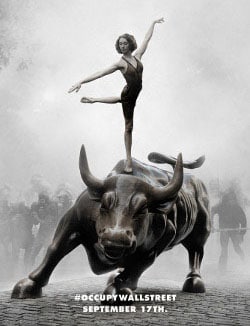 The genius of our ruling class is that it has kept a majority of the people from ever questioning the inequity of a system where most people drudge along, paying heavy taxes for which they get nothing in return. Gore Vidal

The corporate grip on opinion in the United States is one of the wonders of the Western world. No First World country has ever managed to eliminate so entirely from its media all objectivity – much less dissent. Gore Vidal

Even Gore  Never named the beast.

Information Clearing House  While on a peaceful march near Union Square in downtown Manhattan, multiple female protesters were penned up in the street by orange mesh barricade, then maliciously maced.

The women were peaceful and unarmed. They were secured by barricade with an overwhelming police presence. And they were then sprayed directly in the face with pressurized mace…

WeAreTheOther99 continues to peacefully occupy Lower Manhattan to begin a dialogue with the Top 1% with the goal of a peaceful transition of power back to the People.

This can no longer be stopped. But be advised, this will not be televised.

WHO ARE YOU PROTECTING ?

Protesters associated with the Occupy Wall Street movement took an impromptu march up Broadway, clashing with police officers, and getting arrested in the process.

At least 80 protestors involved with the movement were detained near Union Square in Manhattan; some accusing the police officers of using overly-aggressive tactics as they fought to control the demonstrators who left their camp near Wall Street to march up Broadway. Police say the arrests were mostly for blocking traffic; charges included disorderly conduct and resisting arrest.
Protest spokesman Patrick Bruner criticized the police response as “exceedingly violent” and said the protesters sought to remain peaceful.

Other protesters were yelling, “Banks got bailed out, we got sold out,” and called on shoppers to join them in their march.

The protesters, who have been camped out on Wall Street since last Saturday, have been sleeping on cardboard boxes, and eating takeaway dinners paid for by donations to their cause. Nonetheless, their numbers have dwindled from the nearly 1,500 they started with; they roughly now have 200. Initially, the called for 20,000 protesters to camp and protest with them.

“They’re angry at what’s going on in the world,” Rich Marini, 37, a software writer from Great Kills who has been involved in the protest, was quoted in the Daily Mail. “But it’s a good atmosphere. They have a sense of love with each other.”

Apparently the movement, which is an offshoot of online magazine AdBusters, is angered by what it calls the principle of “profit over and above all else.” This, they say, has dominated America’s economic policies and the way in which Americans view culture and humanity.

Posts on the Web site compare the group’s efforts to those used in pro-democracy movements across the Middle East, known as the Arab Spring.

“On the 17th of September, we want to see 20,000 people to flood into lower Manhattan, set up beds, kitchens, peaceful barricades and occupy Wall Street for a few months,” one statement read. “Like our brothers and sisters in Egypt, Greece, Spain, and Iceland, we plan to use the revolutionary Arab Spring tactic of mass occupation to restore democracy in America. We also encourage the use of nonviolence to achieve our ends and maximize the safety of all participants.”

It’s unclear exactly what the protesters will ask for in exchange for leaving Wall Street.

“More than having any specific demand, per se, I think the purpose of Sept. 17, for many of us who are helping to organize it and people who are coming out, is to begin a conversation, as citizens, as people affected by this financial system in collapse, as to how we’re going to fix it, as to what we’re going to do in order to make it work for us again,” said Justin Wedes, an event organizer.

The rally itself was first called for by Adbusters in July.