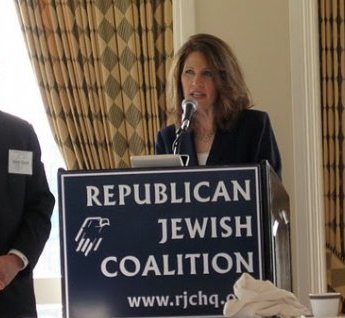 There is an interesting article over at the Jewish Telegraphic Agency (JTA) called “How The GOP Has Learned to Love Israel Unconditionally.” It’s a real eye-opener in that it shows how a so-called American political party grovels for Jewish support by making clear it will always give blind support to the Jewish state of Israel.

The article points out that the leading Republican candidates, Mitt Romney and Rick Perry, disagree on many issues, but not on the issue of America’s support of Israel. This holds true with the Democrats as well. Remember when Democratic presidential candidate Howard Dean in 2003 said he favored “an even-handed” approach to the Israeli/Palestinian conflict he was strongly attacked not only by Republicans, but also by his own party? Nancy Pelosi went ballistic and wrote and circulated a letter slamming Dean’s common sense approach to the conflict and pledging continued unreasonable and unchecked U.S. support for the Jewish state. You know there is a very serious problem when someone is attacked for calling for an even-handed approach to solve a serious and deadly problem!

Evangelical Christian support for Israel is mentioned as a key reason so many Republicans are falling all over each other to show their support for Israel. It quotes the Jew and former George W. Bush speech writer and White House Liaison to the Jewish community and who is now a communications consultant for John Hagee’s organization, Christians United for Israel, Noam Neusner, as saying, “Israel is not just for Jews anymore.  There are 5 million American Jews and 50 million evangelicals, some of whom are Hispanic, African American, Korean. Every Sunday morning they are reading scripture and reading it seriously.” Of course, reading scriptures, that is, the Bible and the Old Testament/Hebrew Bible in particular, you are going to believe that the Jews are chosen by God “above all people that are upon the face of the earth” (Deuteronomy 7:6) and that Gentiles “are indebted” to Jews and should “minister to them also in material things.” (PDF)

The article did not mention the control over the media organized Jewry enjoys. This is the most powerful weapon when it comes to politicians. For if the media won’t cover you or will only cover you in negative ways, your campaign is shot.  Currently Americans see the world through kosher lenses and the spineless political whores know this.

Another tactic that is used to control both parties is to label people who don’t want to sacrifice America and Americans for Israel as “appeasers.”  This harkens back to WWII when people who wanted peace, people like Charles Lindbergh and Joseph Kennedy, were labeled by the Jewish dominated media as appeasers. This still works today as was demonstrated by the Israel push for America to go to war with Israel’s enemy Iraq. I suppose the kosher media would label George Washington and John Adams as appeasers because they supported the Treaty of Tripoli which was a treaty with Muslims. (It’s interesting to note that Article 11 of the treaty states, “As the government of the United States of America is not in any sense founded on the Christian religion . . .” This should knock the wind out of the 50 thousand evangelicals who’re calling for American subservience to Israel since they get the bulk of their twisted beliefs from the Bible. )

Also mentioned in the article is how the neoconservatives won a lot more influence with the 9/11 attacks. Many people believe the powers that be had prior knowledge of the 9/11 attacks. This, too, has been done before. FDR knew about the Japanese attack on Pearl Harbor prior to it happening. A great book on this is Infamy by John Toland.

When we look at the neoconservative movement which was started by a Jewish professor, Leo Strauss, who wanted the world based on the Hebrew Bible/Old Testament, we see that the neocons had a large roll in getting the U.S. to start a war in Iraq for Israel’s benefit.