Home Veterans Obama Called on to Save America’s Veterans 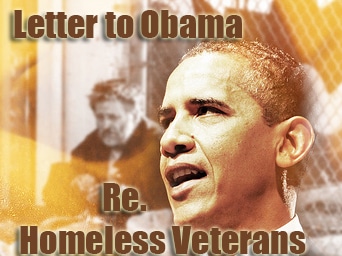 Editors notes: Over the past few months, politicians and veterans groups have filed lawsuits against the Department of Veterans Affairs to force it to provide needed housing for homeless veterans. The problem is beyond epidemic and growing daily. More suits are planned, all “showboating” and little but political game playing.

The battle began in Los Angeles over 3 years ago with a group of veterans and the backing of Veterans Today. We are willing to accept partnerships from newly concerned individuals, Mr. Shriver in California and others who need to be seen seeming to care. However, without any real knowledge of the issues or any real history of commitment to veterans, this “hijacking” is also a “derailing.”

It is time for the president to step in. We are the ONLY veterans organization to support the president. We ask him to listen to his only supporters in that arena.

Taken from a statement recently issued by the president’s own party:
THEREFORE BE IT RESOLVED, that the Los Angeles County Democratic Party, along with hundreds of thousands of veterans and their families, support an immediate halt to any giveaway, sale, lease or contracting of any of the Los Angeles National Veterans Home property, either to a non-veterans organization or for any non-veteran related purpose, and the revocation of any existing agreements to do so; and urges President Obama and VA Secretary Erick Shinseki to direct money and resources to that end.

BE IT FURTHER RESOLVED, that the Los Angeles County Democratic Party calls for the Congressional Oversight Committees, California Democratic Congressional Delegation, particularly Congressman Waxman, whose district the property is located in, and Senators Boxer and Feinstein to male public all information regarding deals, agreements and contracts with private companies and organizations using this property and its facilities in order to restore these facilities so the property can be fully utilized for its submitted.

‘Born on the Fourth of July’ Author Helps Declare Ownership of VA Grounds from Brentwood Patch on Vimeo.

Thank you for your promise to end Veteran homelessness. Los Angeles is our Nation’s capital for homeless Veterans and we need your immediate assistance here.

Enclosed is a recent letter to General Shinseki, Secretary of the Department of Veterans Affairs, regarding the abuse and neglect of a homeless Female Veteran. This is reprehensible, but it’s only one isolated case because abuse and neglect run rampant against America’s Veterans at the largest VA in the nation.

In 1888, more than 600 acres of land were deeded to the U.S. Government for the permanent and sole benefit of housing disabled and disadvantaged Veterans. In accordance with a Congressional Act of 1887, a National Soldiers Home was constructed that was to be maintained in perpetuity for Veteran shelter and care.

Today, 20,000 Veterans live homeless and hungry on the dangerous streets of Los Angeles because their deeded land has been pillaged and plundered for non-Veteran use, including a playground and athletic field for a wealthy private school, a private youth soccer field, there’s a public dog park, a public community park, public theaters, a public golf course, a public botanical gardens, commercial car rental storage, etc., on these sacred grounds.

The mismanagement and misappropriation of property at this National Veterans Home is colossal in scale and criminal in execution. This is the biggest land-fraud scam and heinous crimes against America’s Veterans.

Also enclosed is a brochure titled “A National Disgrace,” along with a Veterans “Declaration of Ownership” and “Notice to Vacate” for unlawful occupants.

Mr. President, Veterans need your immediate leadership to evict all unlawful occupants on Veterans property and to rebuild these desecrated ruins into a new Veterans Home of honor and pride. (See “Grand Plan”)

With your new Job Plan to rebuild our nation’s infrastructure, we respectfully request that you set aside $2.5 billion to demolish the existing obsolete and dysfunctional facilities and build a new “Grand Home and Gardens” for our disabled and disadvantaged Veterans. This will also put thousands of Veterans to work.

In brief, Veterans need a “Home” to share with their Brothers and Sisters, not rent vouchers and food stamps that will force them to live in cheap apartments run by phony and disingenuous special-interest groups.

Please put into effect a Presidential Executive Order that restores ownership of this sacred land for Veterans use only with a directive to immediately begin construction of a new Home so that we can care for our Veterans with pride and dignity. Our pledge: “Never again will an American Military Veteran be denied shelter and care at the Los Angeles National Veterans Home.”

in Los Angeles for Disabled and Disadvantaged Veterans

Be It Known, that the Old Veterans Guard is a loyal and staunch supporter of the men and women of our Untied States Armed Forces and America’s Military Veterans, and particularly look out for the greater good of those who are disabled and disadvantaged.

Whereas, on March 2, 1887, the Forty-Ninth Senate and House of Representatives of the United States of America, assembled and approved an Act of Congress: ”That the Board of Managers of the National Home for Disabled Volunteer Soldiers are hereby authorized, empowered, and directed to locate, establish, construct, and permanently maintain a branch of said National Home for Disabled Volunteer Soldiers to be by such Board located at such place in the States west of the Rocky Mountains as to said Board shall appear most desirable and advantageous”; and

Whereas, Sec. 2, of the Congressional Act of 1887 stipulates: “That all honorably discharged soldiers and sailors who served in the regular and volunteer forces of the United States, and who are disabled by disease, wounds, or otherwise, and who have no adequate means of support, and by reason of such disability are incapable of earning their living, shall be entitled to be admitted to said home for disabled volunteer soldiers, subject to like regulations as they are now admitted to existing branches of the National Home for Disabled Volunteer Soldiers”; and

Whereas, Sec. 3, of the Congressional Act of 1887 stipulates: “That as soon thereafter as practicable from the approval of this act, the said Board of Managers shall secure the necessary lands and commence the erection of suitable buildings for the use of said branch”; and

Whereas, One year after the Congressional Act was signed into law, John P. Jones and Arcadia B. de Baker agreed to give the United States Government 600 acres to be held in Trust for a National Soldiers Home in Los Angeles (Home); and

Whereas, the Department of Veterans Affairs (DVA) is the U.S. Government’s entrusted steward and the fiduciary administrator for the Home’s Charitable Trust, which currently operates as the VA Greater Los Angeles Healthcare System (VA GLAHS); and

Whereas, the DVA and VA GLAHS have seriously violated the Congressional Act and breached the Deed / Trust by facilitating a series of privileged, low-rent/rent-free “sharing agreements” and enhanced use leases with commercial and non-profit corporations for purposes other than benefiting Veterans; and

Whereas, Veterans land has been pillaged and plundered for non-Veteran use, including, a playground and athletic field for a wealthy private school, there’s a public dog park, a public community park, public theaters, a public golf course, a public botanical gardens, commercial car rental storage, etc.; and

Whereas, today more than 20,000 Veterans are homeless and living on the dangerous streets of Los Angeles, even though this is their lawfully and legally deeded “Home”; now therefore

Be It Resolved, that on behalf of America’s disabled and disadvantaged Veterans, the Old Veterans Guard resolutely requests that the U.S. Government permanently maintain the Home as stipulated in the Congressional Act of 1887 and the Deed and Charitable Trust of 1888; and

Be It Further Resolved, that the Old Veterans Guard supports the attached Veterans “Declaration of Ownership,” “Grand Plan” and “Declaration of Enforcement” to recover this sacred land and resolutely requests the U.S. Government to invest a minimum of $2.5 billion to demolish the current ruins at the Los Angeles National Home and construct a new and modern facility.

Be It Further Resolved, that this Resolution is conveyed to President Barack Obama for prompt action to implement a Presidential Executive Order to evict all unlawful occupants at the Los Angeles National Home and construct a new “Grand Home and Gardens” for disabled and disadvantaged Veterans

Approved this Fifteenth Day of September, 2011