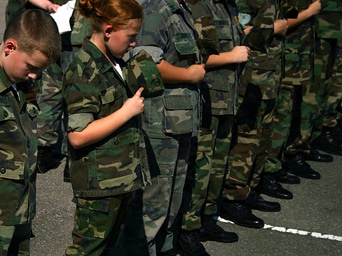 WASHINGTON, Oct. 13, 2011 – A new campaign is working to put the “veteran” back into Veterans Day and to rally public awareness of the sacrifices made by injured veterans and their caregivers.

The Wounded Warrior Project kicked off “Believe in Heroes,” which focuses primarily on wounded veterans from Iraq and Afghanistan and their caregivers, on the 10th anniversary of 9/11 terror attacks. The campaign will continue through Nov. 11, Veterans Day, said Jonathan Sullivan, executive vice president of the nonprofit organization.

“Veterans Day has become a national holiday that most Americans give a cursory moment of thought to before going on with their day,” said Steve Nardizzi, the Wounded Warrior Project’s executive director.

Veterans will be recognized at NASCAR races, NCAA and NFL games as part of the campaign, Sullivan said. Two recent 8-kilometer events sponsored through the campaign drew 1,245 people in Jacksonville, Fla., and 65 in Seattle, he added, and the next 8k walk or run will take place Oct. 15 in Charlotte, N.C.

Regardless of how people show support, he added, the intent of the campaign is clear. “Believe in Heroes is a call to action,” he said, to recognize the meaning of Veterans Day, and to support the needs of wounded warriors and their caregivers.

From the earliest stages of the Wounded Warrior Project, Sullivan said, there was concern about the sacrifices caregivers would make to care for their wounded warriors. “Once the most traumatic of injured warriors are out of the hospital and back home,” he added, “the caregiver can be in for a long road ahead.”

Engaging families and caregivers is essential to helping warriors make the transition back to life after they’re injured, Sullivan said, noting that combat injuries affect both the warrior and the family.

The idea for the campaign stemmed from what Sullivan said seemed to be dwindling public interest in the significance of Veterans Day. “Very few people pause Nov. 11 and reflect on the sacrifices our vets made on behalf of us,” he said, and he expressed the hope that the two-month campaign to raise support and awareness of the wounded, their caregivers and all U.S. veterans would create a groundswell of interest that will repeat year after year, every Veterans Day.

“The public would be reminded of how much our wounded warriors sacrificed on the battlefield for us,” he said.