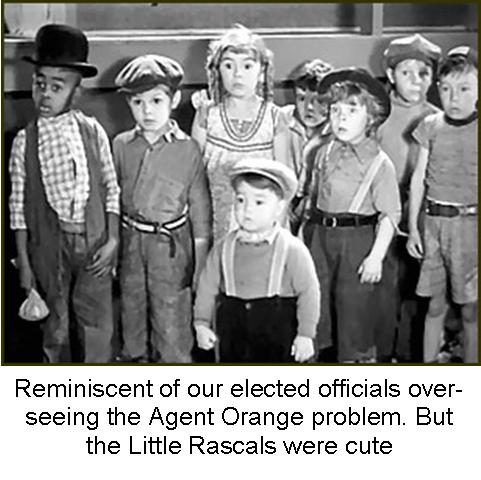 For nearly fifty years veterans have been at war. First, defending our country so that the rights we take for granted will be insured, and second, to gain recognition that they were used as part of a grand human experiment in Chemical and Biological Warfare.

Agent Orange and other Chemical “weapons” were used in Southeast Asia but also in Korea, military bases all over the world, and on the home front in Times Beach, MO; Pinal National Forest, Alsea, Oregon; Alaska, with the unused inventories deliberately dumped into rivers and streams or haphazardly buried in Niagara Falls, Gainesville, FL, and elsewhere.

As our readers know our fight with the US government runs deep within the Vietnam veteran community, but most Americans, particularly those who were not even born when that war was being fought or have simply chalked it up to another page in history, do not realize that the battle being wage by the veterans is for ALL AMERICANS. For if the government can get away with human experimentation with our military, everyone in the country should be fearful that they are the next “stepping stone” in a series of how much wrong-doing the government can perpetuate on the population as a whole.

Don’t believe it? Look around. We have a government today that is treading on very thin ice as they spend our nation into oblivion (more than $14 trillion in debt). We have 60% of the public getting more in government services than they pay in taxes. We have elected officials that are not in Washington to “do the nation’s business”, but rather ingratiate themselves with power and wealth at the expense of the citizenry, exempting themselves from the very laws they pass and impose upon the people. And we have a government, that through the use of “class warfare and envy”, have begun a process of taking over or becoming partners with financial institutions and crazy business proposals like Solendra and Sun Solar (the next big failure-$1.2 billion down the sewer), as they crowd out private-sector free enterprise that made America great.

Yes, the veterans are fighting for their rights to be compensated for their being used as pawns, but also for every American, particularly our children and grand children. If we are not successful, would the last person standing in a Free America, please turn out the lights.

For the last several months I have been writing about Agent Orange regurgitating a number of facts that have been known to veterans that point directly to a massive cover-up  involving chemical companies who manufactured the defoliant products which are classified as Chemical and Biological Weapons (CBW) and the US Government. By working with many Veterans Service Organization (VSO), we have been able to consolidate information and share facts, documents, medical records, and tribunal findings, which are undeniable, proof-positive, that needs to be shared with the American public, Congress, and brought before the federal judicial system.

Since the very first veteran filed a claim for benefits for healthcare issues relating to Agent Orange, the Department of Defense, the Veterans Administration, Monsato, Dow Chemical, and a dozen other smaller chemical companies “circled the wagons”, leading to the claim of thousands of veterans… “Deny, deny until they die”. As sorry of a situation as this has been for the tens of thousands suffering from a list of diseases that even the infamous NAZI war criminal, Joseph Mengala, could not have conjured-up to reap upon the concentrationcamp guinea-pig-humans used in his experiments, the entire story has never been told. I’ve been trying, but it almost too much ground for writer to cover.

The smallest group affected by exposure to Agent Orange is the US military veteran. The best kept secret is the untold hundreds of thousands of innocent civilians living in Vietnam, Laos, Cambodia, Korea, Puerto Rico, Okinawa, Marshall Islands, New Zealand, Canada, and in the US, that have been isolated and segregated very quietly out of the public eye, but are experiencing healthcare problems just like our veterans. Most of the public has never heard these stories, but Monsanto, Dow, and all the other chemical companies which wrecked havoc on the world, sit ideally by, sipping piña coladas, and enjoying record profits without having to atone for their misdeeds.

Congress is in a position to “right the ship”; make right what has been a complete miscarriage of justice and show the world that Americans can face the music, regardless of the cost, and not be the cowering weasels that for 50 years who have tried to bury the Agent Orange issue. Most veterans believe our current government is no better than the previous parade of elected enablers, but with all the records now comingto light, veterans and civilian accounts, hiding will be much more difficult and voters will not stand for it.

But have we the people learned anything from the experience? Apparently not all of us. “Agent Orange is one of the most devastating weapons of modern warfare, a chemical which killed or injured an estimated 400,000 people during the Vietnam War — and now it’s being used against the Amazon rainforest, where ranchers in Brazil have begun spraying the highly toxic herbicide over patches of forest as a covert method to illegally clear foliage faster than chainsaws and tractors. In recent weeks, an aerial survey detected some 440 acres of rainforest that had been sprayed with the compound — poisoning thousands of trees and an untold number of animals, and exposing generations to unimaginable heath care issues” (from foodfreedom.word press article).

In an older article by Judy Price (Multi-national Monitor Organization) one can easily see that the chemical companies are not happy with just creating the Agent Orange debacle. Where they can’t sell, they will get their foot in the doorway by giving away their toxins. “TALKEETNA, AK – In the summer of 1992, the Alaska Railroad Corporation finally bowed to a protracted citizens’ campaign against herbicides, agreeing to end its use of chemical herbicides to clear its tracks. In the wake of this victory, however, the giant corporation Monsanto introduced a new chemical threat to the Alaskan environment, securing the support of a Native corporation in a plan to aerially spray large tracts of the Native corporation’s land with the herbicide Glyphosate (commercially sold under the name of Roundup)”. If you want more nightmares read the data on this chemical!

Back in 1975, the Alaska Railroad (ARR), then a federal entity, was the only governmental agency to continue heavy herbicide use. Throughout the 1970s, the ARR solved its vegetation management problem by treatment with surplus drums of Agent Orange (2,4-D and 2,4,5-T) leftover from the Vietnam War. Obviously, the government collaborative cover-up with Big Chemical, kept the hazards of Agent Orange from trickling down to several state governments. But in 1978, Jay Hammond, then-governor of Alaska, issued a directive which banned the use of herbicides by state agencies.
Shortly thereafter Monsanto and Dow tripped all over themselves trying to give away their products and enlisting support from among the ranks of the bureaucrats to pursue “studies and test” of herbicides, with much success. As an example, in rural south-central Alaska where roads are hard to come by and railroad tracks become the mode of travel, DOW and its enabling bureaucrats were able to obtain permits for spraying areas along the railroad tracks. Despite the efforts of those living nearby, the residents reported that over-spraying into gardens, streams, and cabins to the dismay of the Alaska Department of Fish and Wildlife and Department of Environmental Conservation.

In 1982, local citizens met with Railroad officials and convinced them to flag “sensitive areas” close to residences as non-spray zones. During the regular spray run that year, the flagged areas were skipped as agreed. But two days later, the spray truck returned in the middle of the night and in complete disregard for the deal that was set-up, the no-spray zones were sprayed anyway. Of course the railroad officials denied the allegations, but all along the area in the no-spray zone vegetation turn brown and died out.

According to the Judy Price article, “Within the month, Alaska Survival, represented by the Sierra Club Legal Defense Fund, filed suit in federal court to stop herbicide spraying on the Alaska Railroad. While the suit was under review, Federal Judge James van der Heydt allowed ARR to continue spraying. In August, ARR sprayer Eric Lind was fired after objecting to spraying in rain – a practice which violated provisions of ARR’s pesticide-use permit – near the town of Whittier. It was not until the following year, 1983, while ARR was again being investigated for over-spraying creeks, that the court prohibited ARR from herbicide use until it had complied with the National Environmental Policy Act (NEPA) by preparing an environmental impact statement”.

The grassroots anti-chemical movement remains powerful force in Alaska, but the chemical companies never give an inch. If anyone can even believe it, they find “PIGEONS” like Dr. Michael Newton of Oregon State University, a herbicide researcher and strident chemical industry defender who still is a proponent of Agent Orange. Dr. Newton is reminiscent of the Holocaust of NAZI Germany…”it never happened”, “the Holocost was an exaggeration”, “it’s all lies”, etc. This is the kind of mindset we the people are fighting. Hello Dr. Newton…which planet have you been on for the last 50 years?

According to Newton, “Chemicals are the only approach now known capable of dealing with the scale of the current vegetation problem in Alaska. Thirty-five years ago, the Lower 48 was in the same place we are now in Alaska. Here we can accelerate the process using chemicals.” Logging the forests, and the difficulty of reforesting coastal forests after clear-cutting has somewhat discouraged the replanting effort. Brush and weeds that grow in area where there are no trees hinder the growth of seedlings. But industry promises of success with herbicides makes massive clear-cutting of Alaska’s coastal and taiga forests more likely, and like the Great Messiah, Monsanto and Dow have come forward to lead the way.

Hello Congress, are you listening to us yet?