Home Veterans Emperor George and the Lost War in Iraq 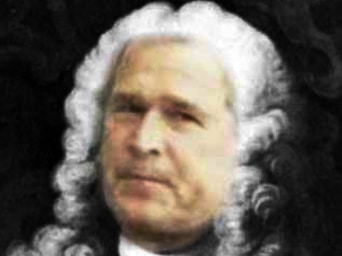 EMPEROR GEORGE AND THE LOST WAR IN IRAQ

By Susan Lindauer, former U.S. back channel to Iraq and the second non-Arab American arrested on the Patriot Act

Once upon a time there was a President named George who wanted to be Emperor. (Not a bad idea. He was a lousy President. He really needed a different job.)

President George had traveled to Mexico—once. So he figured the whole world was pretty much like Texas. He thought about it for, oh, five minutes. What he needed was a country far, far away to invade. Surely those foreigners would be charmed by his folksy swagger (being more primitive and all). They’d appreciate him more than those Gosh Darn Americans, who had awfully high expectations of a President. Why, he imagined these foreigners would bow and scrape and wow over his every golf shot.

So he pulled out a map. And he saw Iraq— with a “Q.” And he asked one of his ministers what he’d heard about this place. The minister’s eyes got bright: “Ohhh,” he said. “Iraq’s got oil and pipelines. We could make some serious profits if we grabbed Baghdad, and tossed its rulers in the trash can of history.”

Well, if there was one thing President George understood, it was oil profits. That’s what paid for those Black Helicopters ferrying rich folks to private parties in Houston. Absolutely everybody who was anybody had a helo-pad on their ranch. So when George heard about Iraq’s oil, he saw his destiny. He would be Emperor of the World from Texas to Baghdad.

President George called all his Republican friends to a Grand Old Party, where he proclaimed his vision. He promised to share Iraq’s oil wealth (so they could ride in helicopters and private jets, too). And he started handing out military contracts by the fistful.

And the Republicans declared, “This is a Democracy. We vote to make you Emperor.”

There was just one pesky Little Female who would not shut her mouth! He called her “Miss Bossy Boots,” and he hated her like nobody else. She was T-R-O-U-B-L-E!!! See, she’d been a covert back channel to Iraqi diplomats at the United Nations in New York years before he ever got to be President. And she shrieked from the rooftops and banged on every door on Capitol Hill, warning this War with Iraq would be catastrophic.

Some of his opponents compared her to Cassandra, who prophesied the defeat of Troy. Miss Bossy Boots kept raving that War in Iraq “would cost $1.6 Trillion—” not the puny $300 billion that his allies insisted on. She declared it would “bankrupt the Middle Class, create upward pressure on taxes, and push Wall Street into a double-dip recession.” This lady had spunk, everybody agreed. But she was determined to rain on his parade, insisting the wannabe Emperor had no clothes.

Worst of all, her CIA team had negotiated a comprehensive peace framework that annihilated every possible justification for War. Through her covert back channel, Iraq had consented to 1) resume weapons inspections; 2) invite an FBI Task Force into Baghdad, with authorization to conduct terrorism investigations; and 3) deliver priority contracts to American corporations in telecommunications; health care, hospital equipment and pharmaceuticals; and non-dual use factory equipment.

Why, Iraq had agreed to import 1 million American manufactured automobiles from Detroit and Indiana every year for 10 years!

The CIA’s peace option would mean good jobs with good salaries for American workers, so they could consume endlessly, pumping up profits on Wall Street. If that wasn’t annoying enough, Iraq was ready to give America all the Oil Contracts it wanted.

Why, Baghdad even proposed a highly innovative plan for democratic reforms. They offered to repatriate exiles and house them at expanded Embassy compounds protected by Embassy security. Returning exiles would be allowed to establish political parties, and compete in national elections overseen by America’s favorite ex-President, Jimmy Carter. So the Democracy card was out of play, too.

Miss Bossy Boots! That bitch accomplished it all without the deployment of a single soldier or the death of one Iraqi child.

Damnit! President George wanted to be Emperor. And he needed this War to do it.

Just about this time, spies from his Intelligence Services uncovered a rag tag conspiracy hatched over a campfire in a cave in Pakistan. Kicking over the coals, the wild-eyed young conspirators dreamed of hijacking airplanes and striking a famous building in New York City. George smirked. That suited his plans perfectly. If the attack achieved maximum destruction, George could lay the blame on Iraq— and he’d have all the excuse for War that a President— er, an Emperor— could desire.

Here came Miss Bossy Boots again! She’d got wind of that terrorist conspiracy, too, and she wasn’t playing the game. That stupid woman kept trying to get law enforcement to cooperate with her Intelligence team to block the attack!

FEMALES! He snorted and sulked and pouted!

Now George might have been a lousy President, but a life-time of mediocrity had taught him how to attack anybody who threatened to expose his weaknesses. Getting rid of her would require a degree of ruthlessness. But an Emperor had to be ready to sacrifice his country and his people for his own ambition.

George knew what to do. He declared that anybody who opposed his War against Iraq would be guilty of Treason. His friends in Congress rushed through a law called the “Patriot Act.” It declared that troublemakers and truth tellers could be detained without a trial or hearing, facing secret charges, secret evidence and secret grand jury testimony. They could be locked in prison “indefinitely,” until they got wise to who was boss! And it wasn’t “the power of the people—” like those demonstrators kept shouting outside his bedroom window at the White House.

Emperor George gave the order for Miss Bossy Boots to be thrown in a dungeon — on a military base in Texas far away from the Talking Heads in Washington. He strutted around the Oval Office, celebrating his triumph, while his advisers giggled hysterically. She’d be helpless in Texas. Not one of those prison guards would listen to her stories about the dangers of invading Iraq, because they’d never traveled beyond Mexico, either. And those military generals running the base would do their part. They wouldn’t want their soldiers to hear her rants, while they were packing up to become cannon fodder in Baghdad.

Oh he would teach that female a lesson alright! Miss Bossy Boots would make a good scapegoat. If the War got tough, Emperor George would insist it was all her fault! He would blame her for “poor intelligence before the War.” The more outrageous the lie the better its chance of success, after all. As the coup de gras, she would be denied the right to a Trial. That way she could never call witnesses to dispute the government’s phony stories about Pre-War Intelligence. And she could never expose the government’s advance knowledge of that hijacking conspiracy.

Who said Emperor George wasn’t a genius? Hey, didn’t Troy make out okay in the end? He couldn’t remember. Miss Bossy Boots would know. Given five minutes, she’d probably try to tell him. Well, by golly, he wasn’t going to listen!

With a shit-eater’s grin, he shipped her off to prison on Carswell Air Force Base.

Except the War didn’t go as planned. The Iraqi people were not so primitive as Emperor George anticipated. They fought hard for freedom and the right not to live under a violent Foreign Occupation. American soldiers were hated. None of the other world leaders trusted Emperor George, and America’s pre-eminence and moral authority collapsed on the world stage.

Blaming Miss Bossy Boots didn’t work, either. The Middle Class was too smart for that game. They knew Emperor George and his friends in Congress were to blame for pushing the country into this stupid and unnecessary War. The Middle Class survived every day confronting the damage and losses to the domestic economy, caused by the massive deficit spending and national debt to pay for this failed Empire. They watched money dry up for schools and parks. Roads and bridges got bad and started to break apart. There was no money for police or teachers. Little boys and girls couldn’t grow up to become firefighters—which looked like the best job in the world for 10 year olds, who dreamed of becoming heroes. Ordinary people couldn’t afford medicine.

Emperor George packed his bags and tried to sneak out of town to live out his days on his ranch back home in Texas.

As he was driving away, the crowds lined the streets and he could hear them shout:

Susan Lindauer is the author of “Extreme Prejudice: The Terrifying Story of the Patriot Act and the Cover Ups of 9/11 and Iraq–” This humble tale mirrors her work in Pre-War Intelligence, right down to the peace option and advance knowledge of 9/11. It describes the unbelievable brutality she suffered when Republican leaders decided to crush her opposition to the War, including the year she spent in prison on Carswell Air Force Base.