Home World Gaddafi dead: What next? 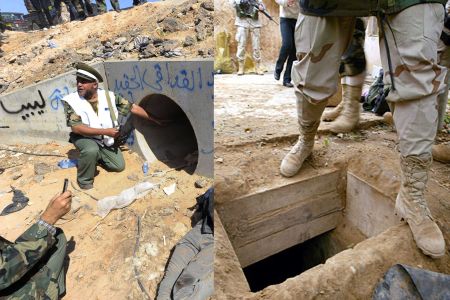 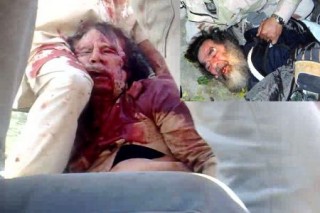 The report that the evasive Libyan ruler Colonel Muammar Gaddafi has died as a result of the wounds he sustained during a NATO attack has flung the Libyans into a jubilant frenzy while it has provoked mixed reactions from the political observers who may eye the event with reasonable degree of suspicion.

“He (Gaddafi) was also hit in his head,” National Transitional Council official Abdel Majid Mlegta told Reuters. “There was a lot of firing against his group and he died.”

Mlegta also revealed that Gaddafi had been wounded in both legs at dawn on Thursday while he was trying to escape in a convoy bombarded by NATO warplanes. Does this mean that the NATO forces who were sure that Gaddafi was in the convoy did not want him alive? If so, why would they want him dead? To the NATO forces, a dead Gaddafi would be better than a living one indeed. Another report however says that Gaddafi was hiding in a hole in the ground and had said “Don’t shoot, don’t shoot” to the men who grabbed him. Anyone without the need for a capacious memory can bring to mind the Iraqi dictator Saddam Hussein when he was shown coming out a hole in a similar manner.

That Gaddafi has been captured or killed does not make very much difference so long as NATO is seen as the victors in this arena. 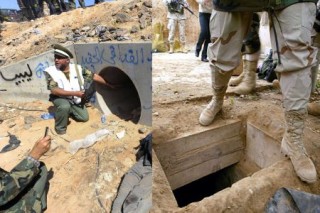 Undeniably, the presence of US forces under the umbrella of NATO casts serious doubt on the ‘good intentions’ of the forces fighting shoulder to shoulder with the rebels to liquidate Gaddafi and root out the remnants of his decadent family.

Earlier, the US Secretary of State Hillary Rodham Clinton had offered millions of dollars in new aid to Libya in a so-called token of goodwill, and had urged the new leadership in the country to commit to a retribution-free future.

“I am proud to stand here on the soil of a free Libya,” Clinton said on a Tuesday visit to the capital, Tripoli. “The United States was proud to stand for you in your fight for freedom and we will continue to stand with you as you continue this journey.”

But why is it that the good intentions of the US government are only lavished on oil-rich countries while Palestine was deplorably ignored by the US government when Israel started a three-week bombing and invasion in 2009 in an operation known to the Israelis as Operation Cast Lead and to the Palestinians as the Gaza Massacre during which Israel unleashed a bloodbath. According to reports, in January 2009, after seven days of bombing, some 9,000-10,000 Israeli troops made a brutal invasion of Gaza, killing over 1400 Palestinians with half of them being women and children. Over 3,300 were wounded, with an estimated 45 percent of them being women and children. What happened in Gaza was a merciless offence to the hearts, the minds and the ears. But, Washington was shamelessly silent. But where does all this political apartheid come from?

Conversely, the US is acutely alert to the developments in the region particularly in oil rich countries such as Libya. Now with the reported death of Gaddafi, the US will be able to use this as a shortcut to achieve the ulterior motive it has been harboring: getting its hands on Libyan oil.

The value of Libya’s oil lies in its quality rather than in its quantity. The oil coming from Libya is generally described as sweet crude oil, which needs the least possible refinement while most oil coming from Saudi Arabia and other countries is of lesser quality.

The Cuban Revolution leader, Fidel Castro, has described NATO military campaign in Libya as a means for the US to invade and take control of the country’s oil.

In an article named “NATO’s Inevitable War,” Castro predicted that the military campaign of the US and NATO sprang from the sheer desire of getting “their hands on the northern African country’s oil”.

In a similar vein, US Congressman Dennis Kucinich blamed Washington for seeking to take control of Libya’s vast oil reserves by engaging in a military intervention.

“Was the United States, through participation in the overthrow of the [Libyan] regime, furthering the aims of international oil corporations in pursuit of control over one of the world’s largest oil resources?”

“Did the United States at the inception of the war against Libya align itself with elements of al-Qaeda, while elsewhere continuing to use the threat of al-Qaeda as a reason for US military intervention, presence and occupation?” he added.

He also blasted the US government for perpetuating a war the resources of which “should be spent creating jobs in America and in building bridges in America.”

Hugo Chavez, Venezuela’s president, has expressed a similar concern and said the intende goal of the US in invading Libya was to get oil.

He has reiterated that the United States is after the Libyan oil; the Libyan oil is driving them crazy. They were also after the Iraqi oil when they invaded that country.

Dead or alive, Gaddafi would hardly play a part in the developments the future has in store for the Libyan nation.

The question that arises here is: how can Gaddafi’s death benefit the Libyans on their path to democracy?

With the West consolidating their foothold in the country and the US carving out the fate of the Libyans, there leaves little room for a bright horizon for the country until the people unite together and decide for themselves.