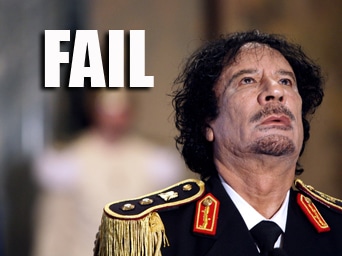 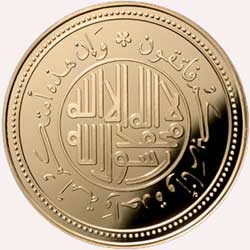 Let’s face it: Qaddafi was a failure.

He was looking for unity in all the wrong places: Arab unity, African unity, “third-world” unity.

In his doomed quest for unity, Qaddafi was a failed idealist.

“Arab”-ness is just another nationalism, another form of empty identity politics. “African-ness” and “Third Worldness” are no better. Africa has two thousand different languages and cultures. The Third World has even more.

Qaddafi also failed to survive and carve out a niche for himself as a head of state to be reckoned with. He failed to win the West as an ally, despite all his concessions and backroom deals.

In his doomed quest for power-through-accommodation, Qaddafi was a failed pragmatist.

Finally, in the most noble effort of his life, Qaddafi took up the cause of the Islamic gold dinar and silver dirham. In this he was a failed saviour.

The irony is that the real Grand Unity Project, fueled by the Islamic gold dinar and silver dirham, was right there in front of Qaddafi’s nose all along, only he couldn’t see it. It’s called Islamic unity.

The vast majority of the world’s Muslims consider themselves part of the Umma – the Islamic nation. According to a Global Public Opinion poll, two-thirds of the world’s Muslims want to “unify all Islamic countries into a single Islamic state or caliphate.”  That means that the minute there is real democracy in the Muslim-majority countries, those countries will cease to exist, and merge into a reborn Islamic caliphate.

But wait! Those people don’t want to be ruled by sharia law, do they?! Oh yes they do. According to the same poll, three-quarters of the world’s Muslims want to “require Islamic countries to impose a strict application of sharia.” If you think about it, this is no more outrageous than Americans wanting to use the American legal system, or the French wanting to use the Napoleonic code. Nobody wants to be ruled by powerful foreigners, and nobody wants to be forced to use a foreign legal system in ones own country. And for most Muslims, their country is Islam – not the pathetic little bantustans the West carved out of the Islamic world less than a century ago, nor the even smaller and more pathetic bantustans the Israelis and their American lapdogs are trying to carve out today.

Qaddafi, ironically enough, silenced, persecuted, tortured, and murdered Islamic activists who held high the green banner of Islam, with its creed “no god but God, and Muhammad is God’s prophet,” as the basis of anti-imperialist unity and a reborn Islamic nation. He was the last great Arab secular nationalist, in the mold of his hero Nasser. With his passing, Arab secular nationalism is officially dead.

The Islamic gold dinar and silver dirham, however, are very much alive; and they are the weapons that will create the Islamic unity that the Muslim majority wants. All Muslims have to do is say, very firmly: Our religion requires us to use only commodity currency. We must pay our zakat in gold and silver. Usury is a crime equal to rape and murder, and using money created through usury is as bad as participating in mass rape and murder. We cannot use Rothschild money. Henceforth, we will only accept commodity money in return for our oil and gas exports. And henceforth, usury money, like usury itself, will be banned from all Muslim-majority lands. Like the EU, we will create a common currency, the gold dinar and silver dirham; and then we will move beyond the EU and create a real political union with a shared defense force.

These are the demands that Occupy movements in Islamic nations must adopt – and which the Occupy movements in the West should support. After all, the root of all political evil is the Rothschild money monopoly. Western dissidents alone don’t have the power to topple it. Only the Muslim bloc – 1.5 billion people potentially willing to die to liberate themselves and the planet from the rule of the usurers – has that power. That’s why Muslims were framed for 9/11: To launch a pre-emptive war on Islam. The Banksters were trying to pre-empt Islam’s coming victory over usury.

Whether it happens this year or next, or in a decade or two, Islamic unity is coming, because the people want it. The rebels’ victory over Qaddafi will be seen in retrospect not as a win for Western imperialism – as so many alternative journalists think – but as the end of misguided nationalism and another big step toward the coming reunification of the Islamic world.