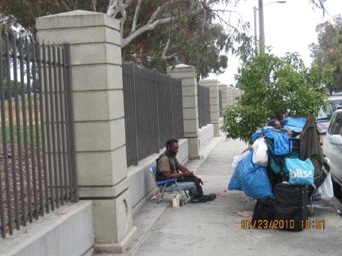 Our government provides shelter, beds, meals and care for hardened criminals in our local, state and federal prisons and for thug terrorists at Camp Gitmo, while homeless Veterans have been forgotten, exiled and dispossessed in our own country.

President Obama recently announced, “I can report that, as promised, the rest of our troops in Iraq will come home by the end of the year.”

The overriding issue is when will the United States Government bring our homeless Veterans who are already here in America – “Home”.

As a supposed moral and compassionate society, how can we allow the exclusively deeded property at the Los Angeles National Veterans Home to be leased for a public dog park, public golf, public community park, public parking lots, private school grounds, carnivals, used car storage, etc., while an estimated 20,000 Veterans are homeless and fending for their lives on the dangerous streets of Los Angeles? The answer is simple. We can’t!

In 1975, after the fall of Saigon, Camp Pendleton Marine Corps Base situated north of San Diego, welcomed, sheltered, fed and clothed more than 50,000 refugees from Vietnam.

An estimated 900 Marines and civilians worked six days erecting more than 1,000 tents and Quonset huts at Camp Pendleton, and subsequently helped tens of thousands of Vietnamese refugees become part of the American way of life.

Most of the Vietnamese refugees arrived in America without any personal possessions and they did not speak English. Nonetheless, they were sponsored by volunteer families, churches and corporations throughout Southern California and were readily assimilated into our society. Moreover, the vast majority eventually became productive U.S. citizens as well as leaders in their communities.

That was 35 years ago. And lest we’ve conveniently forgotten, while the Vietnamese refugees were welcomed into our country, America’s Military Veterans who had fought to defend them in their native country were insulted and ostracized when they returned to their own native country.

The fact that Vietnamese refugees were given immediate attention and support while thousands of our Vietnam War Veterans are still homeless and destitute is shameful beyond comprehension.

If America was able to provide shelter and care for 50,000 Vietnam Refugees 35 years ago and got them safely assimilated into society, then surely we can do the same today for 20,000 of our disabled and disadvantaged Veterans who have been exiled from their rightful and legal Home by our own government.

As grateful Americans, we must accept our responsibility to take immediate care of our disabled and disadvantaged Veterans because more and more Iraqi and Afghanistan Veterans are becoming homeless. Tragically, some would be safer in a war zone fighting with their Military unit than trying to survive alone on the crime-ridden streets of LA.

Consequently, we must demand that our government take urgent action and build an emergency Tent City encampment for homeless Veterans on their deeded property, including the 16-acre parcel where a wealthy homeowner group has a privileged arrangement to build a public park.

Equally important, we must demand that our government evict all unlawful occupants of Veterans property and begin the immediate construction of a new National Home with modern resident halls and rehabilitation facilities for Veterans to safely and peacefully heal from the war injuries they suffer in our behalf.