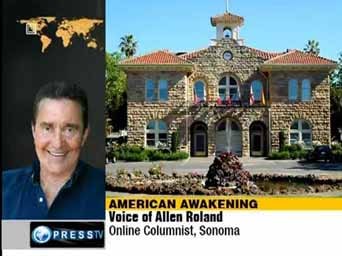 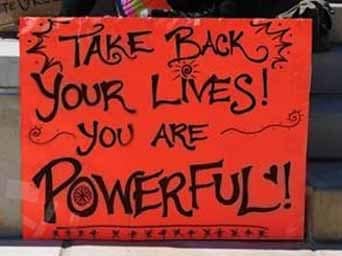 America has lost its moral bearings! Recent polls indicate that if Occupy Wall Street (OWS) were a candidate for President, it would decisively beat any candidate from either party. 86% of Americans think that Wall Street and its lobbyists have far too much power in Washington and those Americans are taking to the streets demanding real moral change.

As I have mentioned before ~ there are evolutionary moral juices flowing through the Occupy Wall Street movement and they are social cooperation and altruism versus isolation and greed. A true shift in global consciousness is upon us for the OWS Movement is touching deeply felt evolutionary chords which will eventually break down the global walls of greed, separateness and war and will replace them with altruism, social cooperation and peace ~ the true driving forces of evolution. See my article ~

According to a recent CNN/ORC International poll, only 15% of Americans asked said that they trust the federal government to do the right thing most of the time ~ and that is because Washington is out of sync with America’s grass roots moral values.

In a Press TV Interview this week I stress that the “Occupy” movements are seeking moral changes ~ both economic and political ~ which focus on social cooperation and altruism, not greed.  I also stress that America has obviously lost its moral bearings / six minute video

I also mention the three stages of Occupy Wall Street;

The first step in regaining our moral bearings is the truth ~ which has yet to be fully revealed to Americans and which accounts for the deep mistrust of not only Wall Street but politicians in general ~ including President Obama. All of whom are obviously in bed with Wall Street and the corporate banking elite.

Have we forgotten the words of Carl Sandburg?

” For we know when a nation goes down and never comes back, when a society or civilization perishes, one condition may always be found ~ they forgot where they came from. They lost sight of what brought them along.”

No where is this loss of moral bearings more evident than our illegal preemptive attack and occupation of Iraq, where we set up and implemented a U.S. controlled coalition government, where we stage managed a flawed election and judicial system and where we condoned the brutal hanging of Iraq’s sovereign leader after a mock U.S. managed monkey trial. The recent brutal assassination of Libya’s dictator Muammar Gaddafi, by US backed NATO forces and rebels, is yet another example of our flawed moral vision.

Here’s the collective human cost of this flawed moral vision ~

Please Note the wars will cost Americans between $3.2 and $4 trillion, including medical care and disability for current and future war veterans, according to a new report by the Eisenhower Research Project based at Brown University’s Watson Institute for International Studies.

Obviously, we have lost our moral bearings and focus and that is what’s driving the Occupy Wall Street movement ~ and many others acknowledge this driving collective moral force of a country that wants to redeem itself from its past and continuing moral transgressions.

George Lakoff correctly writes in AlterNet ( How Occupy Wall Street’s Moral Vision Can Beat the Disastrous Conservative Worldview ) that OWS has a progressive moral vision and that they’re protesting the disastrous effects that have come from operating with a conservative moral, economic, and political worldview.
Excerpt: “It seems to me that the OWS movement is moral in nature, that occupiers want the country to change its moral focus. It is easy to find useful policies; hundreds have been suggested. It is harder to find a moral focus and stick to it. If the movement is to frame itself, it should be on the basis of its moral focus, not a particular agenda or list of policy demands. If the moral focus of America changes, new people will be elected and the policies will follow. Without a change of moral focus, the conservative worldview that has brought us to the present disastrous and dangerous moment will continue to prevail…. Remember: The Tea Party sees itself as stressing only individual responsibility. The Occupation Movement is stressing both individual and social responsibility.”  See article ~

Former four star general and NATO commander Wesley Clark talks about that disastrous conservative world view and the resultant neocon plan to invade seven countries in five years ~ including an attack on Libya and eventually Iran. He calls it the neocon policy coup of the United States led by Dick Cheney and many others. Remember, there’s nothing moral or humanitarian about dropping bombs under the guise of a humanitarian intervention ~ Video:  Eight minute Commonwealth Club Interview / 2007

In summary, OWS is a people’s movement with the moral power to change the world ~ because the need to unite and co-operate is a soul based moral need whereas the need to separate, control and destroy is an ego based immoral need and contrary to human evolution.

As I predicted several months ago, a grassroots people’s freedom movement that started in Egypt will end in America in 2012 when the people demand the moral change they voted for in 2008 and never got with Obama ~ but this time, we will get it by ourselves!