Home Life We Are The 99% Who Want Peace, Harmony And Love On The... 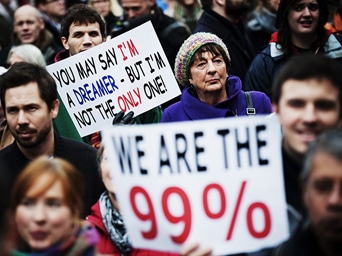 As people took to the streets in a rolling action targeting 951 cities in 82 countries from Asia to Europe, Africa and the Americas ~ they are all joined spiritually by a common innate urge to unite and bring about a world  cemented in Peace, Harmony and love. We are not dreamers, nothing will stop our march to true freedom and we are already too big to fail.

“You’re here because you know something. What you know you can’t explain ~ but you feel it. You’ve felt it your entire life; that there’s something wrong with the world; you don’t know what it is, but its there, like a splinter in your mind, driving you mad. It is this feeling that has brought you to me. Do you know what I’m talking about?” – The Matrix – 1999

Mark this moment ~ a true shift in global consciousness is upon us for the Occupy Wall Street Movement is touching deeply felt evolutionary chords which will eventually break down the global walls of greed, separateness and war and will eventually replace them with altruism, social cooperation and peace ~ the true driving forces of evolution.

Meanwhile, there is a well deserved political panic growing on Wall Street as the Occupy Wall Street movement’s top demand of ‘taking the money out of politics’ brings about increased corporate anxiety as well as an intense moment of truth from the mainstream media’s Dylan Ratigan ~ three minute video;

The poet laureate of the Occupy Wall Street movement is the late John Lennon whose prophetic lyrics to Imagine strike a universal need for a world community to unite in peace, love and harmony ~ not war, hatred and disconnection. Read and listen to Lennon’s words for they are now being carried in the streets of cities throughout the world ~

Imagine no possessions
I wonder if you can
No need for greed or hunger
A brotherhood of man
Imagine all the people,
Sharing all the world…

I hope someday you’ll join us
And the world will be as one.

This is a people’s movement with the power to change the world ~ because the need to unite and co-operate is a soul based need whereas the need to separate, control and isolate is an ego based need and contrary to human evolution.

As such, the War on Terror is an unwinnable war!

Under these circumstances the most powerful weapon that can be used against Terrorism is social cooperation and altruism. And there is much evidence that these twin weapons of mass outreach to the poor and disenfranchised are the very foundation of our evolution as a human species.

Indeed, It is Teilhard de Chardin who clearly reveals this urge to unite and co-operate as a fundamental law of nature.     ” If there were no real propensity to unite, even at a prodigiously rudimentary level, indeed, in the molecule itself, it would be physically impossible for love to appear higher up in the ‘humanized’ or human form. “ ( The Phenomenon Of Man )

Teilhard used the term ‘within’ to denote the psychic face or consciousness of matter ~ since the beginning of time ~ which reveals itself in its innate urge to unite.

Teilhard defines this innate urge to unite as an energy force in his famous Law Of Complexity – Consciousness. The law states two principles:

Teilhard divided this fundamental energy into two distinct components ~ a Tangential energy which linked the element with all others of the same order and a Radial energy which represented the innate urge toward union and greater complexity as well as a leap in consciousness.

It is this Radial energy in matter, this deep urge towards
union and completion, which eventually manifests itself
as LOVE .

As such, Teilhard’s Radial energy is one in the same with what I call a state of Soul Consciousness and the Unified Field  . A state of love and soul consciousness that exists not only beyond time and space but also deepest within ourselves and whose principle property is the universal urge to unite.

If we compare this with Darwin’s evolutionary theory, Darwin’s only error was to substitute matter for spirit as the motivating force of the Universe.

For it becomes increasingly clear, in light of this innate urge to unite, that man is the product of an evolution of cooperation and love. From the pre-atomic stage in the depths of the primordial sea to his present ‘ humanized ‘ state ~ man is the product of a seemingly endless evolution within a loving plan of plurality, union and a resultant energy transformation into something more complex, more conscious and more loving.

Our common task on this planet is to surrender to this same universal urge to unite and play our part in the great coming together of mankind ~ and it begins with each one of us surrendering to love, social cooperation and altruism versus hatred, separation and greed.

Richard Leakey wrote in “The beginnings of mankind”  that there was very little evidence of violence and aggression in early mankind with considerable evidence of social cooperation and altruism as the deciding factors in evolution.

Scientific American said virtually the same thing in its issue The Arithmetic’s of Mutual Help (June 1995) where it shared how computer experiments show how cooperation rather than exploitation can dominate in the Darwinian struggle for survival. The article by Martin Nowak, Robert May and Karl Sigmund seems to reinforce Teilhard’s Law of Complexity-Consciousness ~ “ Throughout the evolutionary history of life, cooperation among smaller units led to the emergence of more complex structures as, for example, the emergence of multicellular creatures from single-celled organisms. In this sense, cooperation becomes as essential for evolution as is competition.”

They conclude by saying ~ “In the course of evolution, there appears to have been ample opportunity for cooperation to have assisted everything from humans to molecules. In a sense, cooperation could be older than life itself. ”

And what else but Love, social cooperation and altruism could be older than life itself.

As such, we, the 99%, can no longer deny our deepest and most basic urge to unite and cooperate with one another by continuing to condone an unwinnable war on terror, excessive corporate greed as well as economic and social injustice!

And that is the world wide spiritual thrust of the Occupy Wall Street Movement ~ who utilize the consensus process in their general meetings which is an excellent example of true democracy in action.

Direct Democracy:  Eight minute Video – A look into the “HOW” of the Occupy Wall Street movement: The consensus process.

You may say I’m a dreamer
But I’m obviously not the only one,

I hope someday you’ll join us
And the world will be as one.