Violent War Murder Vs. Sex: Which Needs To Be Ostracized From Society?

Today, we expect a verdict in the trial of former Ohio teacher Stacy Schuler. She’s accused of having sex with 5 male students from the high school where she taught Physical Education.

While the specifics of this case are available online for those who seek the minutiae to pass judgment on her individual culpability, the real moral and ethical questions of female teacher sex with male students are putting America’s culture on trial.

We applaud war and fear sex when it should be the opposite.

War is extreme and violent. Sex is a very normal human activity and should be acknowledged and accepted for what it is, not criminalized.

In my view, a teacher has a leadership responsibility to uphold the integrity of the classroom for all students.  Getting personal with some puts that integrity in jeopardy and that’s just plain unacceptable. I think most will agree with this position. 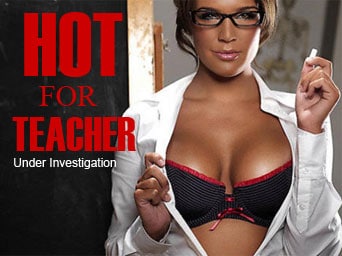 Hear me out first and then post your hate mail…..

First, this lady is facing 25 years in jail for what amounts to guys on the football team walking over to her house for some “banging” fun.  This is excessive.

You may not want to hear this, but speaking as a former teen football player with raging hormones, all we could think about is sex and football. Shocking!  I know!

This is normal for young high school men. It’s just the way it is and to hear that they are willingly going to her house to get some says a lot. That does NOT excuse her leadership responsibly whatsoever but it is a statement that they were NOT raped and were willing participants in the “fun”.  And believe me, it was fun.

There are NO victims in this alleged crime. So let’s stop treating boys as if they are violated. Come on, it’s non-cents!  Kick them in the ass and tell them to respect the ladies but not to make them feel like victims for doing what comes naturally.

In an age where most Americans think going to war is cool, where guns and violence are “American” values while sex is a depraved and horrible act, I categorically declare that America has a serious crisis in values and priorities, and it’s’ hurting the society in super bad ways.

“Kids, violence is bad, sex is good! Remember that!  Sex is normal and you should always be proud and respectful of it. Violence is super bad and failure of negotiation and diplomacy”

Frankly, violence speaks poorly of the tribe that proactively engages in such, and America, being the number one supplier and delivery of war toys to the world, has been on the wrong side of this humane dilemma for a long while now.  We need to make a cultural paradigm shift and get us back to humanity.

In short, I want to make sure that my children are functioning and will have joy in their lives, not this dysfunction and psychosis for just being human.  And, we as a society, should do the same.

Now, back to the point of being a guy.

Believe me, ladies, we are not raped by you. That’s nonsense. It’s super hard to find a willing young high school girl to exercise our sexual humanity. It’s brutal. They are not ready and we are and it’s unbalanced.

Young men are predatory. It’s our nature. Criminalizing it or telling us that we are victims when we are the penetrators is mind-blowing brainwashing.

Come on man, seriously, you think any young man who bangs a teacher is going to be a victim? Really?  Try he’s going to tell all of his friends about his sexual conquest and prowess….it’s tribal, it’s in our nature. Stop trivializing the truth. It’s non-cents.

Sorry equality people, there is a natural difference between men and women, and denying it only takes away from the intellectual discussion.

Now, ask yourself…what appalls you more; the killing and murder of 500,000 Iraqi civilians launched by that notable self-proclaimed Christian crusader moralist George Bush and his assigns or 5 teenagers banging their teacher at her house?

For most of Americans, they want to crucify and jail the teacher while they pay George Bush $ 40,000 to speak at their high school.  Very strange indeed.

In my view, we got this violence vs. sex thing backward!

As an infamous poet from the depths of protesting yesterday at Occupy Oakland said as they handcuffed him and led him away to join his tribesman of over 2,000,000 fellow American prisoners “If you have not been indicted you have not been invited” and America, you’re on trial.

Where do you stand?