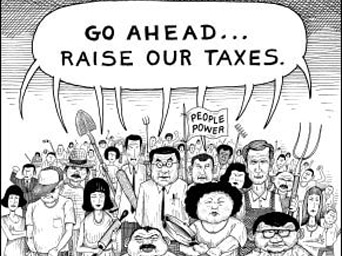 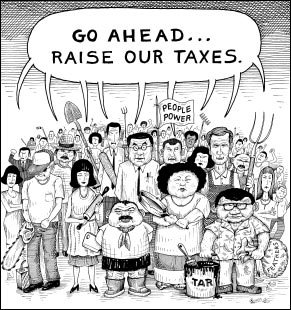 With the actual Presidential election more than a year away, it is now the trial, error and silly season for the candidates. This is the time when candidates try floating new ideas and recycling old ones to see the reaction of the potential voters.

With there being no apparent challengers to Barak Obama in the Democratic Party, he is already in general election mode.

John Stewart has an excellent editorial video about this subject. The Comedy Central Website will not allow me to imbed it here like I normally do with videos, but this link will take you to their site. It is worth watching as he makes some excellent points. Sometimes truth is expressed best through comedy.

World of Class Warfare -The Poor’s Free Ride Is Over

In the land of misfit politicians, AKA the Republican Party, they are dragging out all of the old reliable issues, both real and made up. One of these perennial decoys is the so called “Flat Tax.” They try rolling it out every few years to muddy the waters. According to this myth, all income would be taxed at a lower flat rate than currently collected and the losses would be made up in volume. Everyone would pay the same rate and tax preparation would be greatly simplified. All sorts of rates have been proposed and all would benefit the wealthy at the expense of the poor and middle class.

Herman Cain was the first to propose his “9-9-9 tax plan.” Under his proposal, individuals and corporations would pay a flat rate tax of 9% and a Federal sales tax of 9% would be added. On the surface, this sounds fair, after all everyone would pay the same. Unfortunately, Michelle Bachman’s speechwriter got it right. In one of the GOP debates, she was told to use the clever quip that if you turned 999 upside down, you would get 666 and the devil is in the details. (I am not criticizing her specificallyfor that; all political candidates are given clever “ad libs” to say by writers. She has plenty to criticize, but that is for a different time) I hate using anything she says, but in this one case, she got it right. Even a broken clock is right twice a day.

Let’s examine this plan starting with the 9% sales tax. Sales taxes are very regressive in that they affect people at the lower economic levels proportionally harder. Everyone has to buy basic products and services and the addition of 9% to their cost would price many basic essentials out of range. As an example if I buy a new $30,000 car under the current tax laws, I pay the 6% Michigan sales tax on it or $1800. Cain’s additional 9% Federal sales tax would add another $2700 for a total of $4500 in sales taxes. If I borrowed the money for 4 years at 4% interest, the additional $2700 would cost me an extra $63.22 per month and an additional $234.68 in interest over the course of the loan. I might just decide that I really did not need a new car. Add this to the thousands of others who would come to the same conclusion and auto sales would plunge, auto workers would be laid off and be unable to purchase other products and those industries would lay off workers. Since these workers would not be earning wages, they would stop paying taxes and begin collecting unemployment insurance and the government would be in more debt.

The wealthy would purchase their big ticket items, such as yachts overseas to avoid this sales tax and would put US yacht builders and their suppliers out of business. In the current fragile economy, these are the last things you would want to happen.

The 9% corporate tax would greatly reduce government revenues. The current corporate rate is 35% but corporations are allowed to make deductions and get credits, so the effective rate is much lower. Last year General Electric actually had enough tax credits that the government paid them money for an effective negative tax rate. This was all within the law as they invested heavily in alternative energy and “green” technology which the government is encouraging through tax credits. They also benefited from provisions in the tax code put there for their benefit. At least in this case, some of this new technology may eventually benefit the country. Many businesses collect these benefits and do nothing for the general welfare of the country.

I have been told by people on the right that corporations don’t pay any actual taxes because they pass those costs on to their customers. This is true as far as it goes, but that does not mean that they should not pay taxes. In my car example above, let’s say that $1000 of the cost of my new car goes to pay GM’s taxes. (I have no idea of the real figure, but I suspect it is much lower) If they paid no taxes, and passed along all of the savings, which is also highly doubtful, my new car would only cost $29,000 and the government would lose $1000 in revenue which everyone else would have to make up, so you all would be helping me buy my new car. True, your share of my car would be less than a penny, but multiply that by all the cars and other goods sold and it adds up to real money. Why should you subsidize my new car? You shouldn’t. I get the benefits of the new car and I should be the one to pay for it. Cain’s plan is light on details, but he does not say that he would get rid of corporate deductions, so most companies would pay little or no taxes.

Now we get to the 9% personal rate. People with low incomes currently do not pay any income taxes, and that presumably would stay the same under his plan. Low income people do, however, pay payroll taxes, property taxes and sales taxes, so even though they pay no income taxes, they are far from tax exempt. As a percentage of income, they pay the highest total tax rate.

Now let’s run some real numbers. A person working for minimum wage, $7.25 per hour, for 40 hours per week, for 52 weeks per year with no days off would earn $15,080 per year before any deductions. Taking out the employee contribution to social security at 6.2% a total of $935 leaves this person $14,145 for the year. This person would probably pay no income tax. For the purpose of this example, we will figure that this person pays $500 per month in rent and another $500 for other essentials including food, clothing, insurance, etc. These items would be taxable under Cain’s plan.

According to the US census, the average median income of employees in all states in the US is $51,575. Doing the same calculations for this person yields a tax of $7915 for an effective rate of 15.3%.

The bottom line then is the minimum wage earner would pay an effective tax rate approximately 3 times that of the millionaire and the median income person would pay nearly twice the rate. This is in no way flat or fair.

Rick Perry and Mitt Romney have both recently come out with their own versions of the flat tax. The exact figures for their plans will calculate out differently, but the net result will be the same. Perry’s plan even goes farther. He would completely eliminate capital gains taxes and all inheritance taxes. Most of the truly wealthy derive most of their income from capital gains (which are currently at the low rate of 15%, rather than the maximum rate of 35% on wages) on investments, rather than wages, so they would end up paying virtually nothing. A lot of people have been duped into believing that when old Aunt Betsy dies and leaves them $2000, the government will take most of it. This is a big lie told by people like the Koch Brothers and the other Koch suckers to the Tea party and their followers. The truth is that aunt Betsy could leave you $20,000 or $200,000 or $999,999 and you would pay no Federal inheritance taxes.

The President has proposed raising the top rate to 39% on only the portion of a person’s income that is over $250,000 and closing some glaring loopholes and, thus far, Congress has resisted. The party line at the GOP is that rich people need their money to create jobs. This is basically a steaming pile of bovine scat. The President’s plan to give targeted tax cuts to those who create jobs is better than just giving them the tax cuts with no strings attached and hoping that they will create jobs, but not by much. People don’t hire people based on tax cuts. They hire people when they have jobs for them to do. This means that they are selling their products or services and need more help to keep up with demand. The targeted tax cut might make a slight difference, if an employer is “sitting right on the fence” about whether to hire someone or not, but otherwise it would make no difference.

Most people believe that real tax reform is needed, but we need to make sure that we are getting something better and fairer, not just simpler.