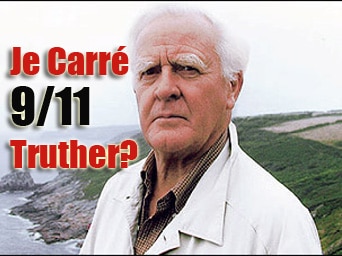 We do need a revolution, and it looks like John Le Carré and his protagonists will be joining it.

“The reaction to 9/11 is beyond anything Osama bin Laden could have hoped for in his nastiest dreams. As in McCarthy times, the freedoms that have made America the envy of the world are being systematically eroded.” John le Carré, “The United States of America Has Gone Mad” 1/15/2003

Has spy novelist John le Carré, the nom de plume of ex-MI6 agent David Cornwall, ever suspected there’s a method in the post-9/11 madness? Does he know that 9/11 achieved everything the neoconservatives were calling for when they demanded a “New Pearl Harbor” in Rebuilding America’s Defenses – published exactly one year before 9/11? Has he heard of World Trade Center Building 7? Has he noticed that 9/11 itself, and the weaponized anthrax follow-up, was indeed beyond anything Bin Laden could have hoped for in his nastiest dreams – that indeed Bin Laden and his network did not have the means to pull off anything remotely like 9/11, as top Arab political analyst Mohammed Heikal noted shortly after the event? Has he looked at evidence of a massive cover-up, and the tie-ins to Mossad-linked organized crime, including the Russian-Israeli mob?

I cannot find any evidence that Le Carré has publicly questioned the official story of 9/11. But his latest novel, Our Kind of Traitor, examines the seismic power shift – the takeover of the state by an organized crime network dominating the financial sector – of which the 9/11 inside job was a symptom.

The novel opens with the protagonist, a university literature teacher, livid about the 9/11 wars and post-9/11 assaults on freedom, snarling “We need a revolution.” The rest of the novel bears that statement out.

Le Carré dishes up a contemporary version of the classic Cold War plot in which British and/or American intelligence agents snatch a Russian defector in hopes of whisking him to safety and a new life, while garnering a treasure trove of crucial information that will save the free world from perdition. In the new, post-9/11 version, the Russian defector is actually a Russian mob defector: the world’s biggest money launderer, ready to rat out the seven mobster oligarchs to save his life. And instead of communists like Kim Philby infiltrating the free world’s intelligence services and complicating the defector-snatch operation, Le Carré paints the corrupt financier kingpins of the City of London and the rest of the global big banking sector as today’s bad guys and infil-traitors. (In this, he apparently agrees with Occupy protestors as well as 9/11 truthers.)

Mike Ruppert, who along with Alex Jones dominated the early 9/11 truth movement, noted that 9/11 was orchestrated by corrupt, money-laundering elements at the top of the US-UK-Israeli financial sector. Webster Tarpley places those elements squarely at the center of the City of London. Wayne Madsen highlights the role of the Russian-Israeli mob, which according to FBI whistleblower Sibel Edmonds was employed to finance the 9/11 operation by Bush Administration neocons Richard Perle and Douglas Feith, by way of mob fronts called the American Turkish Council and the American Azerbaijan Council. Christopher Bollyn has linked 9/11 to many specific Zionist mob players in the US, mainly New York and Chicago. And Jeff Gates shows us the big picture: A trans-generational mafia, the biggest and baddest organized crime ring on the planet, that created the state of Israel as its main base of operations, and arranged 9/11 as a kind of global coup d’état.

While acknowledging that a coup has occurred, and the mob-linked financiers have taken over, Le Carré goes out of his way to eschew any Jewish or Zionist connections to the Russian mobsters he depicts. In this, one might say he protests too much, especially when he has his protagonist wonder whether the Russian money launderer he meets might be Jewish, only to be set straight by the crucifix the mobster’s wife wears around her neck. In the real world, where six of the seven biggest Russian criminal oligarchs are Jews with connections to Israel and Zionism, it would more likely be a Star of David.

Le Carré does offer one apparent reference to the famous “put options” of 9/11, in which unidentified investors made billions by betting against United and American Airlines as well as Morgan Stanley and other big World Trade Center tenants. (The 9/11 Commission told us not to worry, because it wasn’t al-Qaeda that bought the put options; and besides, the question of who financed 9/11, i.e. who is really responsible for the worst crime in history, is “of little practical significance.”) Le Carré has his Russian mobster confess to having been given inside information before the Mumbai “Muslim terrorist attack,” which led him to divest himself of his Mumbai holdings, buy them back after the price-crash following the attack, and make a ten million dollar profit. Buzzy Krongard, eat your heart out!

Despite his studious avoidance of the connection between Zionism and organized crime’s takeover of the West, and his failure to directly question 9/11, Le Carré’s depiction of moral people confronting a terminally corrupt power structure rings true in other respects. A fine, righteous anger with prophetic echoes shines through his understated prose. By ending his book with an actual Observer news article entitled “Drug Money Saved Banks in Global Crisis, Says UN Advisor,” Le Carré underscores the obvious: Our Kind of Traitor is not just a first-rate spy novel, but also an audacious bit of social criticism.

We do need a revolution, and it looks like John Le Carré and his protagonists will be joining it.