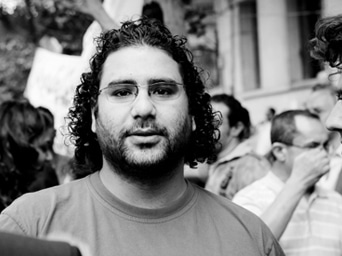 “When will Egypt supreme council of army forces -SCAF- understand that many revolutionaries are afraid of their tender loving mothers more than they fear death or torture,” Abdel Fattah wrote in independent Egyptian newspaper, Al-Shorouk.

Abdel Fattah, who rejects the notion of civilians being tried by military courts, has refused to be interrogated by military prosecutors as a matter of principle. He has also vociferously criticised the idea that the military prosecution should investigate the Maspero clashes, in which military police were directly involved.

As a result, the military prosecution ordered his detention for 15 days pending investigation.

Abdel Fattah is considered one of Egypt’s pioneer bloggers, along with his wife, Manal Hussein. Since 2004, both have been publishing their political opinions in well-known blog www.manalaa.net.

Originally, as a software developer and activist, Abdel Fattah has supported initiatives that promote social media, freedom of expression and political activism. In 2005, Alaa and Manal won the Special Reporters without Borders Award in Deutsche Welle’s Best Blogs competition.

It is not the first time Abdel Fattah finds himself facing allegations by the state. In May 2006, he was arrested while participating in a peaceful protest in solidarity with Egypt’s free judiciary movement. His arrest caused an international uproar, as it was seen as an attempt to crack down on blogging activity in Egypt by targeting one of its most influential bloggers.

Abdel Fattah was eventually released in June 2006 after 45 days in detention, during which an international campaign was launched on blogs and on Twitter with the hashtag “#FreeAlaa” – a hashtag that again found its way to many Twitter accounts following news of his latest detention.

Abdel Fattah’s mother, Laila Soueif, is a professor of mathematics at Cairo University, while his aunt is Ahdaf Soueif, an Egyptian novelist of international renown. Alaa’s sister, Mona Seif, meanwhile, is one of the founders of the “No to military trials for civilians” campaign.

Abdel Fattah and Manal moved to South Africa in 2008, where they lived until January of this year, when they took the first flight to Cairo to join Tahrir Square protesters as the revolution erupted. His first day in the square coincided with what has become known as the “Battle of the Camel,” when pro-government thugs attacked demonstrators, leaving dozens dead.

“Alaa fought bravely to defend the square and was never worried that he might lose his life,” said Wael Khalil, prominent blogger and leftist political activist imprisoned with Abdel Fattah in 2006.

Following Mubarak’s ouster and concomitant promises of democratic transition, the couple decided to return to Egypt on a permanent basis. Through their twitter accounts, “@alaa” and “@manal,” the couple announced their intention to have a baby. The baby, they noted, would be named Khaled after Khaled Said, the young man from Alexandria beaten to death by police last year who became a posthumous icon of Egypt’s revolution.

The last thing Abdel Fattah wrote publicly, in independent daily Al-Shorouk, was his eyewitness account of the Maspero clashes and the two days spent at a Coptic hospital morgue battling for autopsy reports. He also spent this time mourning the death of Mina Daniel, the Coptic activist who was run over by military police during the clashes.

“When will the SCAF understand that many revolutionaries are afraid of their tender loving mothers more than they fear death or torture,” Abdel Fattah wrote in Al-Shorouk.

Sunday, October 30, 2011
We, the Campaign to End the Military Trials of Civilians, condemn in the strongest possible terms the imprisonment of prominent Egyptian activist and blogger, Alaa Abd el Fattah and the unjust and illegal system of military tribunals implemented by the Supreme Council of the Armed Forces (SCAF) since becoming rulers of Egypt on January the 28th, 2011.

Today Alaa Abd El Fattah was summoned to the Military Prosecutor’s office, accused of assaulting military personnel, stealing and destroying military weaponry and inciting violence against the military in the events of 9 October at Maspero.

On questioning, Abd El Fattah declined to answer the prosecutor’s questions, stating that it is illegal and a clear conflict of interest for the military, as a party accused of a crime in the same events, to hold proceedings or adjudicate fairly. He was sent to detention pending further military investigation.

As of today we refuse to co-operate with the military prosecution of civilians and we call on all Egyptian citizens to stand with us.

At least 12,000 Egyptian civilians have been subjected to summary, covert military trials. The accused are often denied counsel, the opportunity to review evidence or examine witnesses; there are limited avenues of appeal. Eighteen death sentences have been handed down so far.

Abd El Fattah’s targeting is only the latest example of the systematic targeting of journalists, media figures, bloggers and activists by SCAF.

Abd El Fattah is being held responsible for violence on October 9th, the night when the Army killed at least 28 peaceful protesters and injured several hundred more. Several respected human rights organisation have attested to this.

Furthermore, it is perverse that Mina Daniel is listed as the first name on the Military Prosecutor’s list of the accused. Mina Daniel was killed by military gunfire on October 9th.

Abd El Fattah is now being held for fifteen days in prison by a body which has no legal authority to do so. The fifteen days can be renewed indefinitely. Twenty eight more people are in jail against the background of the same event. Mina Daniel and others have already paid with their lives.

We demand that Alaa Abd El Fattah be freed immediately, that military trials of civilians be stopped and all those sentenced thus far be released or, at least, retried before civilian courts. We support all of those who similarly refuse to recognize the legitimacy of the military prosecution.

For more article by Dr. Ashraf Ezzat visit his website