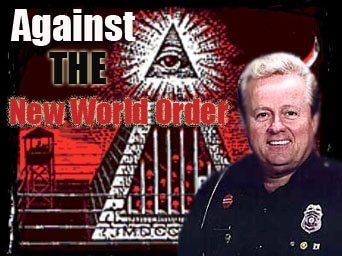 Police brutality/stupidity is no accident. It has been carefully cultivated, and we were warned well in advance.

It should have not been a surprise to us that American cops, trained by Israeli ‘terror’ experts were responsible for the outrage against marine vet Scott Olson, We have had ample warning outlined for us for more than 30 years.

It was in the early 1990s when Jack McLamb erupted out of Phoenix, Arizona to announce his campaign against ‘The New world order” as a guest on Radio Free America.

Jack told us about his ‘Aid & Abet’ organization and newsletter for police officers nationwide.

Obviously, Jack knew what he talked about. Look at police behavior today, and, at a time when they are needed ‘to serve’ more than ever before.

McLamb challenged various police forces and organizations to stand up for the Constitution and their oaths long before oathkeepers.

He provided examples of ‘Globalist training” being ‘given’ to officers across the country, and he worked tirelessly to drive home the point.

Jack McLamb was not only right, but until about 100 days ago he continued his Jeremiad over the air at Genesis network. Like Duff and me, and many others. Jack has slowed down involuntarily, but that does not mean we should forget what he tried to do

It was Jack who first roused the alarm about FEMA concentration camps.

The weasels at the Southern poverty Law Center, protectors of Zion describe this implacable enemy, snidely, as follows:

“Of the sprinkling of law enforcement professionals who supported the Patriot movement, retired Phoenix, Ariz., cop Jack McLamb became by far best known, speaking at Patriot events around the country.

“Describing himself as the most highly decorated officer in the history of his police department, McLamb ran an outfit called Police Against the New World Order that he claimed had a highly unlikely 6,300 members.

“McLamb embraced a panoply of conspiracy theories. He told a 1996 rally that government officials were smuggling drugs into the country in a bid to incite racial hatred. (Which was proved true, was it not?)

“In 1999, he asserted that Vice President Gore intended to reduce world population by 90% through some kind of end-of-the-millennium Y2K plot. He suggested that Communist-led Latinos planned to take over the Southwest.”

Jack was right, sheep and doubters were wrong—is it not time to wake up?

Jack McLamb’s association, Police & Military Against The New World Order, has a singular goal to prevent those in uniform from being unwittingly used to enslave the people of free nations under the anti-God, anti-Freedom (United Nations-led) world government system. The globalists intend to gain, through any available means, total dictatorial control over all the peoples of the world. They cannot realize their goal if their would-be enforcers (police and soldiers) refuse to assist them in their treachery. Jack’s motto spells out this truth: “If police officers and soldiers will not enforce tyranny, it will never be enforced!”

(Ed. Note: I am aware that Jack held British Israel cult beliefs, which goes to show that the Lost tribes, Earthly kingdom scam is successful even among strong thinkers. Be wary.)