How Occupy Wall Street Can Succeed By Avoiding The Failures Of The Tea Party, The Minuteman Movement And Other Well Intended But Failed Movements.

The momentum of the OWS movement is spectacular, something that has been needed in the good ole USA for some time. I am here to offer a word of caution to the participants, how to avoid being hijacked in the manner that the Republican Party hijacked the Tea Party.

I have been politically active most of my adult life. Once I figured out the importance of politics, my life changed. Politics may seem boring to the young, it is not. The effects of politics can be productive for all, or the results can be a disaster for the entire country. What we are currently experiencing as a nation is the abject failure of politics, and it is dreadful, and it is by design.

I became involved with the Arizona Republican Party in 1993; I was considering a run for what was Congressional District 6. I decided to run because I realized the damage that was being done to the American economy and industrial base by the free trade treaties signed by President Bill Clinton, NAFTA, GATT, and admitting China into the WTO. Upon filing with the Federal Election Commission I was summoned by the Party Chairwoman Mrs. Dodie London.

A brilliant woman by any measure, educated, hard working and highly ethical. Mrs. London explained to me that although I had enough money to run, I was going to lose. Another candidate was a local sportscaster, who was on the news every night at 6:00 pm and again at 10:00 pm. Mrs. London explained to me that no matter how much money I spent I could not buy the name recognition that the sportscaster had.

Instead  she offered me a booby prize, I served the Party as the Finance Chairman, and I raised enough money for Republicans to successfully win 5 of 6 congressional seats, elect a freshman US Senator, return a sitting Governor, and totally dominate the State Senate and House of Representatives,  all in all a successful term of service to my party.

My next direct political endeavor was to seek the Republican Nomination for Governor of Arizona in 2006. I was again actively discouraged by the then Republican Party Chairman; it seems that another nominee had been pre-selected. I was not going to defer my political goals again. The reason I wanted to run was because I saw the field of candidates as weak, inept, and in certain cases openly crooked.

It was then that I learned the hard way what political operatives are and what they do for a living. In a nutshell, they are the people who destroy lives and hard won reputations. I encountered dirty tricks of all sort, from the obvious to the subtle and nuanced, and in every case underhanded, but all intended to destroy and diminish everything human and humane about anyone in the race.

I can speak with some real life experience about what operatives can do to a candidate and to a political movement. I choose to write for Veterans Today because this is one of the very few media outlets that actually tells the truth, warts and all. I would rather have an ugly truth, than a beautiful lie. I can deal with an ugly truth; I cannot deal with a beautiful lie. No one can.

Most recently we got to observe the hijacking of the Tea Party by various politicians, most blatantly Sarah Palin. The Tea Party was going strong, gaining both traction and momentum. The Tea Party was being successful. That is when the trouble begins. OWS has entered the danger zone for being hijacked. 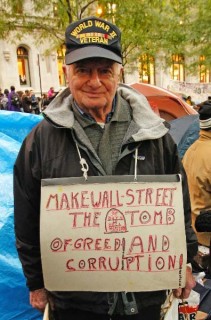 OWS has gained both traction and is daily gaining momentum. In the case of the Tea Party, suddenly there were multiple Tea Party organizations; all competing with each other. 501-C3/C4 Charitable Corporations were formed and names were copyrighted and trademarked.  Suddenly the grass roots Tea Party had official and registered rivals for the name of the movement.

Official rivals that could and did take funding for political agendas of those who were writing big checks, the billionaire Koch Brother being the most prominent, although there were others as well. Once the official Tea Party was created the Major News Media began following only the Official funded Tea Party groups spokesmen, and the grass roots people who started the movement were once again, shut out of the political process that they started. The same thing happened with the Minuteman Project, like this is a script to derail any popular movement that threatens the powers that be, AKA the status quo, the elites..

The next thing to happen was many of the Republican Party politicians who did not share some common beliefs with the Tea Party grass roots began to appear as uninvited guests. Then the talk radio announcements about Tea Party events began, sponsored of course by the official Tea Parties, the grass roots died, and the Official Tea Party is all that remains.

In just a few short weeks Sarah Palin went from has been politician, to the key note speaker all across the country at every Tea Party event. Well meaning people expended time and energy trying to change the system were stuck in an orchestrated dead end. These same protocols were applied to the minuteman movement to stop illegal immigration. The effect was the movement was stopped cold in a very short time.

Sarah Palin, Michelle Bachman, and many other republican politicians who had no connection to the real grass roots of the Tea Party hijacked the movement. Palin, Bachman and many others were being interviewed on Fox News and other news outlets as the spokesmen for the movement. Nothing could be further from the truth behind the real grass roots Tea Party. After the Tea Party was hijacked the message was changed. The Tea Party became 9-11 denialists, and no longer sought the ugly truth about the treason that was committed against the USA.

Never forget that politicians by nature are opportunists. They will glom onto any issue or movement to attract voters and money. Successful movements will attract politicians like shit attracts flies. Politicians will flip and flop on any issue if they believe that it will get them elected. They are chameleons and will change their stripes and colors to suit any situation that will get them elected again, and again.

My advice to Occupy Wall Street to avoid being hijacked in the manner the Tea Party was hijacked is:

Right now our country has a chance to reform, and reclaim itself, from decades of corruption, neglect, and mismanagement. Today is the day to right the wrongs of the past.

Equal Justice for all is a good place to start. We have many issues to address, from the treason of 9-11 to the financial terrorism perpetrated by the Federal Reserve and Wall Street Bankers, to the off shoring of American jobs, the open border and the illegal aliens and drugs that flood our country. There is a great deal we can agree on.

Equal justice for all is where I would like to start. Make today the beginning of first successful regime change in the USA since 1776. God Bless America, and God Damn the corrupt treasonous bastards who did this to our wonderful nation…