You did not see that on CNN or MSBNC or FOX ?

It is on CLG News and PRESS TV  is reporting it.

It must not be true!

Nostradamus predicted the rise of a great movement starting somewhere in the mediteraneum that would shake the pillars of power in Europe.

“The American public have undoubtedly been inspired by the Awakening in the Middle East and North Africa, where “the 99 percenters” rose and stood up to the despotic dictators directing their destiny.”

Is this it ?  “The Great Awakening”

99% Americans have awakened from their slumber.

‘Occupy Boston’ protesters in the US have stormed the Israeli consulate in the city and held a brief sit-in in the building’s lobby, Press TV reports. 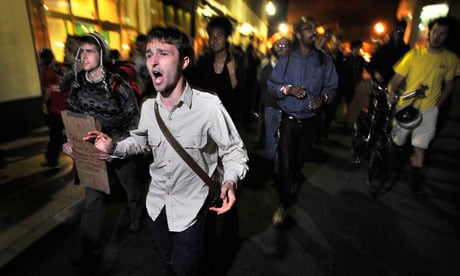 On Friday, activists gathered calling for the liberation of Palestine, angry at Israel for intercepting an aid flotilla on its way to the besieged Gaza Strip.

Protesters chanted slogans such as, “not another nickel, not another dime! No more money for Israel’s crimes” and “Vive viva Palestina,” demanding the departure of Israeli consulate officials from the US.

The protest is part of a global movement against social and economic inequalities, and corporate greed.

Participants made clear that they are not anti-Semites, but anti-Zionists, critical of the Israeli government’s current policies.

The “Occupy” movement emerged after a group of Americans on September 17 gathered in New York’s financial district to protest against the unjust distribution of wealth in the US and the excessive influence of big corporations on the American politics.

Despite mass arrests and widespread police crackdown, the movement has now spread to major US cities, as well as to other countries, including Australia, Britain, Germany, Italy, Spain, Ireland, and Portugal.

Of the 27 human rights defenders captured during Israel’s illegal takeover of the Freedom Waves to Gaza vessels on Friday, 4 November, 20 political activists remain in Givon prison and the whereabouts of one is unknown.

The whereabouts of British journalist, Hassan Ghani of PressTV is unknown.
On Saturday prison authorities told lawyers that Hassan was not at the prison, yet we know that he has not yet been released. Freedom Waves organizers demand that the Israeli authorities reveal where Hassan Ghani is being held and that he be allowed access to a lawyer.

The Israeli authorities have tried to pressure the human rights defenders that remain in Israeli prison to sign a voluntary deportation agreement (waiver of right to see a judge) in order to be immediately deported. The activists refuse to sign, not because they want to come before an Israeli judge, but rather because the wavier states that they came to Israel voluntarily and entered the country illegally, which are patently untrue in light of the fact that Israeli naval ships violently seized the Tahrir and Saoirse, and forcibly transported them and all on board to Ashdod. Israeli authorities have ignored requests by the group’s lawyer to deport the activists immediately without having to sign this form that contains falsities meant to absolve Israel of responsibility for illegal abduction of foreign nationals in international waters.

Because they have refused to sign the waiver, according to Israeli law, they will be detained for 72 hours and then brought before an immigration judge, who will rubberstamp the deportation order. After this mock legal process, deportation will commence. For the first 24 hours of their abduction, none of the activists, crew, or journalists, were allowed to call a lawyer or family members. On Sunday, a few were able to make one one-minute phone call.

NOTE: Various accounts from prisoners have come out contradicting Israel’s
claim of a peaceful takeover of the boats. Some activists were tasered and
beaten, and at least one of the captains abused during interrogation. For
accounts that we have been able to obtain, please see: www.tahrir.ca and
www.irishtogaza.org

Canadians face two months of incarceration in Israel without trial

Yesterday, Freedom Waves to Gaza activists detained in Israel – including Canadians David Heap and Ehab Lotayef – came before a judge and were told they could be held in prison for 2 months without charges or trial.

To avoid this, the judge told them, they must sign a statement that they entered Israel ‘voluntarily’ and ‘illegally’ despite being violently kidnapped from international waters and taken to Israel against their will while trying to reach Gaza. While a handful of Freedom Waves to Gaza participants have been deported – including Canadian Karen DeVito – 18 activists and journalists have now been in Israeli prison for 5 days with no end in sight. DeVito is available for interviews.

The Israeli military forcibly commandeered the boats Tahrir and MV Saoirse that journalists and activists were traveling on as part of the Freedom Waves initiative and brought them to Ashdod port in Israel.

American journalist Jihan Hafiz was on the Canadian boat Tahrir, and was among those detained by Israel despite her press credentials. Israeli authorities ordered her and others not to talk about “anything negative or political” during their brief phone calls to home from Israeli detention. This censorship explains why some details are only just coming out now. She reported Tuesday about her experience during the Israeli takeover of the Irish and Canadian boats:

“There were three warships […] four Zodiacs, four water cannon boats, as well as four regular gunboats. All of the commandos on all of these boats were heavily armed. It looked like they were taking on an army of a foreign country.”

She added: “Two water cannons started to pour lots of water into the Irish boat, which flooded it, blew their sockets, and cut off all the electricity. And so, at that point, the Irish delegates I spoke to said they told the Israeli army, “We’re taking on water. We’re sinking. We’re going to go down at sea if you continue with the water.”

Hafiz went on to describe the violent takeover during which guns were pointed at the heads of the boats’ passengers, how they were roughed up, mistreated, strip-searched, and filmed naked. She also tells of how the journalists’ equipment was confiscated, in a bid to silence any reporting that might contradict the sanitized Israeli account of what happened during the hijacking of the Tahrir and the MV Saoirse.

For the full video interview and transcript, click here

“Our friends have been assaulted, tasered, beaten, kidnapped, robbed, and imprisoned. Now Israel is threatening to illegally detain them for two months. What is it going to take for the Canadian government to actually do something about another country kidnapping Canadian citizens and refusing to let them go?” demands Wendy Goldsmith, an organizer with the Canadian Boat to Gaza.

“We are disappointed, but not surprised, by the inaction of Baird and Harper,” said Canadian Boat to Gaza organizer Dylan Penner. “In its failure to speak out against Israel’s blockade of Gaza, the Canadian Government is condoning Israel’s disregard for the human rights of the citizens of Gaza and giving it impunity for its refusal to comply with its international obligations. It is this silence that compels citizens of good conscience, like David and Ehab, to act where our Government has so consistently failed to do so.”

Organizers of the Canadian Boat to Gaza are demanding Foreign Affairs Minister John Baird step down for failing to do his job to stand up for the interests of Canadians.

Please help us continue our work.

For updates, stay tuned to:

Daily deals major GroupOn, which is believed to be in the process of raising $950 million in funding, has acquired SoSasta.com, and Ananya Bubna, co-founder and CEO of SoSasta.com has taken on a new role as Managing Director, Groupon India, reports Alootechie. On being contacted by MediaNama, Bubna declined to confirm or deny the deal, and said that the report is “unofficial” and that we’ll hear from them in a couple of days.

The speculation that GroupOn would enter the Indian market in January 2011 was rife last month, so a deal might have been in progress. From what we’ve been told, they did approach other Indian daily deals sites for an acquisition or an investment. SoSasta (translates as So Affordable) is among the many GroupOn inspired daily deal sites in India, and has been founded by two former Google employees. It had operations in Hyderabad, Delhi, Bangalore, Mumbai and Pune, as of October 2010.

The problem is that for GroupOn, India might end up being another country in their portolio of sites, and not necessarily an area of focus: this might mean that it loses out to stronger India focused businesses that actually put feet on the street for acquiring deals from businesses and brands. In the last year, GroupOn has acquired majority stake in Australian deals site JumpOnIt, acquired Chilean site ClanDescuento and German startup CityDeal.de. The GroupOn brand is virtually unknown in India, out side the Internet business community, so it’s not like the brand will have much leverage. this web site groupon las vegas

Remember that Greylock Partners and GroupOn investor Battery Ventures reportedly committed $8.75 million for investment in deals site Taggle. No GroupOn exit for them.

For any query with respect to this article or any other content requirement, please contact Editor at [email protected] Provided by Syndigate.info an Albawaba.com company