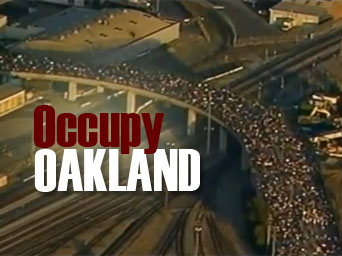 This blogger has been in Oakland since 1974. The largest crowd at Frank Ogama Plaza was for a speech by then-Senator, now President Barack Obama in 2007, and for which was estimated at 18,000. Barack filled the space with people.

The Occupy Oakland General Strike had that many people in the plaza for most of the day, while two huge crowds were outside of it: one marching down Broadway, the other a set of people walking around various parts of downtown Oakland with protest signs.

You can’t take a snapshot of an event like this, because of its time length; you have to think of it as a dynamic. In any population there are births, deaths, in-migration, and out-migration. For the Occupy Oakland General Strike, there were no births, thankfully no deaths, but a lot of in-migration and out-migration.

What was so amazing about the size of the crowd both inside the plaza and just outside of it, then marching to the Port of Oakland, was that it did not decrease in size; it increased. And that was with some people leaving it, and others coming in from BART and from around Oakland via foot or other parts of the Bay by car.

For that to happen all day long and considering the capacity of the plaza and the crowds outside of it points to 100,000 people. I’ve never seen anything like that in the entire history of this city.

And that is why it must be said that much of the media should be drawn and quartered for the most irresponsible coverage I’ve ever seen. Many outlets just waited for something bad to happen, or looked for it. But there were so many people more having a great time, that whatever happened was far away from downtown Oakland.

The Whole Foods Oakland Facility is on 27th and Harrison and outside of downtown Oakland, and a good mile away from City Hall Plaza. But to the media eye, the vandalism that happened there made headlines. Let’s just get this out of the way: it should not have happened, but that’s no excuse to get the whole story wrong.

The happy time lasted for much of the evening, but as the people either went to the Port (I did not go over there) or went home, a crowd of 100,000 shrank, like The Hulk turning back into Bruce Banner, to about a few 100 at best.

Here’s where the media – except the SF Appeal – really screwed up.

The violence happened because of a rather dumb attempt by some with Occupy Oakland to take over an abandoned building in downtown Oakland. Why this idea was allowed to pass the General Assembly I do not know, but Oakland’s Occupy movement is not known for thinking things through all the time. It’s too prone to make moves that are outside of the rules of the Occupy movement – moves that at times cause violence.

(And on that note, business people should be involved in the Occupy Movement, too. It’s something that can be impacted by the voice and involvement of business people. That’s why I think Oakland Chamber of Commerce head Joe Haraburda’s just plain out to lunch on this whole issue. He paints Occupy Oakland in “us versus them” terms, which just shows how much he doesn’t get the whole deal and how it can actually be FORMED to help Oakland business. More on this today, but it must be said there’s a case to be made for the need to be compensated for work. Business people can make that case in solidarity with the movement. Hey, there are Occupy Oakland t-shirts for sale – think about it.)

And that’s not to let Oakland Mayor Jean Quan and the police off the hook here. The main problem is there militaristic approach has only served to make sure that more and more of these skirmishes take place. Downtown Oakland businesses are suffering in the process. Quan has done NOTHING to convince Occupy Oakland to work to help businesses by patronizing them.

The punishment for both Quan and Police Chief Jordan should be to force both of them and their staffs to eat lunch and dinner at Flora, Max’s, Luka’s to start, then go bar hopping in the Uptown.

And I’ll join them.

The bottom line is all of this Occupy Oakland General Strike business has been misreported. The count is 100,000, not 7,000. And the night of activities should not be seen as marring a successful day of parties and festivities.