Home Veterans What Do Joe Paterno And Eric Shinseki Have In Common? 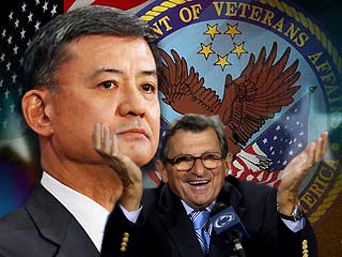 You no doubt heard about the disgraceful exit that collegiate football icon Joe Paterno was dealt at Penn State University.

The man was a legend, respected by not only his players, but other coaches and their players as well. Yet, when he was told about a heinous crime being committed at the University by one of his assistants, he did not take full responsibility to expose the crime and physical and psychological harm brought upon young, innocent boys.

You sir, have a legendary Military career, graduate of the U.S. Military Academy at West Point, and were privileged to sit at the feet of the legendary General Douglas MacArthur when he delivered his revered “Duty, Honor, Country” speech.

You have been respected not only by your fellow U.S. Army Soldiers, but by men and women of the other four branches of our Armed Forces as well.

You undertook the job of Secretary of the VA, a bloated bureaucracy that was seriously and sadly broken when you took over. Fellow Veterans had great confidence that you were “The Man” for the job and would change all that was bad and make it good.

On the very day that you took office, fellow Veterans forewarned you of the crime and corruption at the Los Angeles National Veterans Home, aka, VA Greater Los Angeles Healthcare System.

We informed you that the Los Angeles VA, the largest VA in the nation under your stewardship, is the most corrupt system in all of federal government, and you ignored us.

We openly protested this mismanagement, malfeasance and misappropriation of Veterans property and the abuse of our disabled and disadvantaged Veterans.

The ACLU of Southern California filed a lawsuit against Donna Beiter, your Los Angeles VA Executive Director, and Ronald Mathis, the Chief of Police, for viewpoint discrimination, i.e., censorship of my First Amendment and Constitutional Right when we publicly exposed the truth about the lives of our fellow Veterans and their sacred property that were in extreme danger.

On May 26, 2011, Judge S. James Otero of the United States District Court rendered his decision, ruling in my favor: “Plaintiff’s First Amendment right was violated as a matter of law when Defendants committed impermissible viewpoint discrimination.” …. “Therefore, Defendants’ selective enforcement was an effort to suppress the Plaintiff’s activity due to disagreement with his view.”

In sum, the Defendants, your assistants, censored my free speech and violated my Constitutional Right under the First Amendment. This is a federal crime: “Federal Statute18 USC Section 242 makes it a crime for any person acting under color of law, statute, ordinance, regulation, or custom to willfully deprive or cause to be deprived from any person those rights, privileges, or immunities secured or protected by the Constitution and laws of the U.S.”

The foregoing notwithstanding, both Defendants remain under your supervision and are in full employment, and operating under the color of law in their official capacities at the largest VA in the nation.

In addition to the aforementioned federal crimes, your assistants also violated their own federal Oath of office by failing to uphold the Constitution of the United States — the very document that all men and women who wear the Uniform risk their lives to protect and defend.

Both of your assistants committed a federal crime in order to cover up the land-fraud crimes of Veterans property that was exclusively deeded to be permanently maintained as a National Home for Disabled Veterans.

Meanwhile 20,000 Veterans have been exiled and forced to live homeless and hungry in back-alley squalor.

Some of these men and women served under your top level command when you were Chief of Staff of the United States Army.

Nearly half of today’s homeless Veterans served with you during the Vietnam War.

These noble warriors not only suffer physically and psychologically from their war injuries, but from being further abused and mistreated as human beings and fellow citizens of the United States.

Joe Paterno was disgracefully fired for not taking action when he was forewarned about one young boy being physically and psychologically injured by one of assistant coaches.

You sir, have been forewarned repeatedly that there are 20,000 of America’s Military Veterans who have been exiled, dispossessed, abused, mistreated, and psychotically and physically harmed by your assistants at the largest VA in the nation. You’ve known this for nearly three years and you refuse to take responsibility and take appropriate action. These are crimes against humanity!

Tomorrow is Veterans Day. Just as we have always done over the past three years, we are respectfully requesting, nay, demanding (as we have in the past as well) that you honor your fellow Veterans on this noble day by immediately terminating Donna Beiter, Ralph Tillman, Bill Daniels, Ronald Mathis, Jenelle Happy all top-level bureaucrats at the Los Angeles VA.

We once again, we demand that you cancel the illegal public park “sharing agreement” with Sue Young’s homeowner group, along with all the other leases, agreements and arrangements of those who occupy this sacred land in violation of the Deed and Charitable Trust of 1888.

We are requesting your support of the Veterans Grand Plan that calls for the demolition of all the old and dysfunctional buildings and begin construction of a new and modern Grand Home and Gardens.

Attached is the updated Plan that calls for replacing the originally proposed quad of high rise towers with a low-rise Home that is contiguous in design to unify all Veterans under “one roof.”

We request that you honor and implement the Veterans “Declaration of Enforcement” to protect, preserve and defend the Deed and National Home.

We also request that you appropriate a $5 million grant to Vietnam Veterans of America, California State Council, so they can begin to build immediate temporary shelter on the Grand Lawn with a “Stand Down” so that we can “Bring Our Homeless Veterans HOME.”

For the sake of your own Military career and out of respect of your fellow Veterans, do the right thing and give America’s Military Veterans, particularly our disabled, disadvantaged and homeless Veterans, something to be proud of tomorrow in return for their Service to our Country.

It’s time to bring closure to one of America’s biggest land fraud scams and some of the most heinous crimes against humanity on American soil, perpetrated against thousands of the very men and women who have selflessly protected America’s soil for the benefit of all others.

Did I mention Joe Paterno was disgracefully fired from a distinguished career for not taking proper action when he was forewarned about one of his assistants committing heinous crimes against young innocent boys? 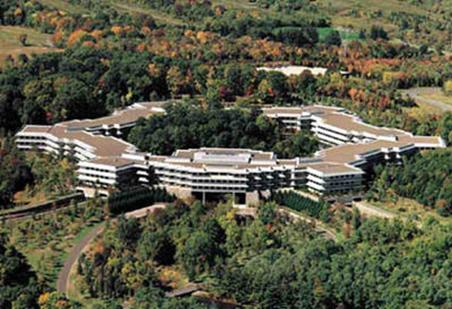 PROPOSED: the Old Veterans Guard is proposing the construction of a new low-rise Grand Home and Gardens on the sacred grounds of the Los Angeles National Veterans Home that is representative of a conceptual design similar to the Merck Headquarters in New Jersey (above).

While our previous plans called for a quad of individual high-rise towers that would take up less land space, we believe that a contiguous low-rise Home will bring about more unity and camaraderie with resident Veterans as they heal from their war injuries.

The new low-rise concept will offer a peaceful setting amidst colorful landscaped gardens with waterfalls, streams and ponds for peace and tranquility. The open space inside the Home area will be a park-like setting with more gardens and waterscaping that closes out the hustle-bustle and noise of a busy city and surrounding traffic.

There will be large verandas overlooking the gardens as a place for fellow Veterans to gather together – much like the original Soldier’s Home in the 1800’s and early 1900’s.