Home World Murakami: We Brought Fukushima Disaster On Ourselves 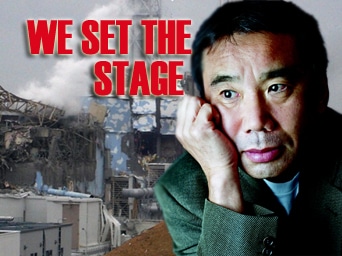 “While we are the victims, we are also the perpetrators. We must fix our eyes on this fact,” he continued. “If we fail to do so, we will inevitably repeat the same mistake again, somewhere else.”

Murakami, whose novels “Norwegian Wood” and “The Wind-Up Bird Chronicle,” among others, have given him a global following, made his comments in an interview with Evan Osnos which appears in the Oct. 17th issue of “The New Yorker” magazine.

Osnos writes about the Japanese response to the March 11th earthquake and the subsequent tidal waves that rocked the Fukushima Daichi Nuclear Power Station on Japan’s Pacific coast.

He quotes then Prime Minister Naoto Kan as saying that he felt “Japan was facing the possibility of a collapse.” Kan, 64, resigned last August amid widespread criticism that he had mishandled the Fukushima crisis.

As journalist Walter Brasch summarized in OpEdNews November 9th: “an earthquake measuring 9.0 on the Richter scale and the ensuing 50-foot high tsunami wave led to a meltdown of three of Japan’s Fukushima Daiichi nuclear reactors. Japan’s nuclear regulatory agency reported that 31 radioactive isotopes were released. In contrast, 16 radioactive isotopes were released from the A-bomb that hit Hiroshima Aug. 6, 1945. The agency also reported that radioactive cesium released was almost 170 times the amount of the A-bomb and that the release of radioactive Iodine-131 and Strontium-90 was about two to three times the level of the A-bomb.”

The Fukushima tragedy caused the operators of most of the world’s 432 nuclear power plants to reassess their safety systems, or to suspend nuclear power generation entirely. Some countries, Osnos says, earlier had suspended nuclear ops as too dangerous following April 1986, the meltdown at the Chernobyl power plant in Ukraine.

Soviet officials attempted to conceal the meltdown but disclosure came when its wind-borne radioactive plume tripped a monitoring device in a nuclear plant north of Stockholm. Fukushima officials were far more candid last March but the areas they said needed to be evacuated were smaller than those U.S. officials told their nationals in Japan to quit.

One casualty of the Fukushima meltdown was candor: Prime Minister Kan’s spokesman Yukio Edano said, “Let me repeat that there is no radiation leak, nor will there be a leak.” Osnos writes, “After the tsunami, Tokyo Electric barred rank-and-file employees from speaking publicly, and the ban is still in effect.” He adds that a poll late in May showed that more than 80 percent of the population “did not believe the government’s information about the nuclear crisis.”

“The Fukushima meltdowns scattered nuclear fallout over an area the size of Chicago,” Osnos continued, and government scientists estimated total radiation released on land was about a sixth as much as at Chernobyl. In a preliminary estimate, Frank von Hippel, a Princeton University physicist, said that roughly a thousand deadly cancers may result from the Fukushima meltdowns. Luckily, significant radioactive fallout allegedly did not reach Tokyo, the world’s largest metropolitan area with 35-million inhabitants. Some 80,000 Japanese living near the plant site were forced to evacuate their homes, though, converting some lovely villages into ghost towns.

Despite all this, Japanese politicians are not about to put an end to generating nuclear power in their country. Osnos writes, “The country would possibly close some of its oldest plants, but the rest—by one estimate, 36 of the 54 reactors—would endure.”

He quotes Economics Minister Kaoru Yosano as saying, “We thought that human beings—the Japanese—can control nuclear by our intelligence, by our reason. With this one accident, will that philosophy be discarded? I don’t think so.” He added that he expects China to build “a hundred or two hundred” nuclear power stations, concluding, “I hope our experience will be a good lesson for them.”

Maybe Fukushima will cause Japan’s nuclear owners to take warnings more seriously. Tokyo Electric in 2009 disregarded warnings by two seismologists that Fukushima Daiichi was acutely vulnerable to tsunamis. In addition, Tokyo Electric endangered the public by concealing more than half a dozen emergencies from government regulators. It had also “faked hundreds of repair records,” Osnos noted.

This pattern of deception on safety issues raises the question of how many “accidents” it will take before Japan reverses course on nuclear power. Also, aren’t those who suffer from radiation and who are driven from their homes entitled to compensation from Tokyo Electric? When a private firm with such an awesome responsibility for public health covers up emergencies and is unprepared for a disaster, isn’t it guilty of crimes against humanity?

Even absent earthquakes and tidal waves, nuclear plants pose an existential threat to humanity. Not only are vast amounts of fossil fuels burned to mine and refine the uranium for nuclear reactors, polluting the atmosphere, but nuclear plants are allowed “to emit hundreds of curies of radioactive gases and other radioactive elements into the environment every year,” Dr. Helen Caldicott, the antinuclear authority, points out in her book “Nuclear Power Is Not the Answer” (The New Press).

The thousands of tons of solid radioactive waste accumulating in the cooling pools next to those plants contain “extremely toxic elements that will inevitably pollute the environment and human food chains, a legacy that will lead to epidemics of cancer, leukemia, and genetic disease in populations living near nuclear power plants or radioactive waste facilities for many generations to come,” she writes. Countless Americans are already dead or dying as a result of our nuclear plants, a story not being effectively told.

Americans have been told there were no casualties as a result of the Three Mile Island (TMI) plant meltdown on March 28, 1979. Yet some 2,000 Harrisburg area residents settled sickness claims with operators’ General Public Utilities Corp. and Metropolitan Edison Co., the owners of TMI.

Their symptoms included nausea, vomiting, diarrhea, bleeding from the nose, a metallic taste in the mouth, hair loss, and red skin rash, typical of acute radiation sickness when people are exposed to whole-body doses of radiation around 100 rads, Caldicott said.

David Lochbaum, of the Union of Concerned Scientists, believes nuclear plant safety standards are lacking and before Fukushima predicted another nuclear catastrophe, stating, “It’s not if, but when.”

“The magnitude of the radiation generated in a nuclear power plant is almost beyond belief,” Caldicott writes. “The original uranium fuel that is subject to the fission process becomes 1 billion times more radioactive in the reactor core. A thousand-megawatt nuclear power plant contains as much long-lived radiation as that produced by the explosion of 1,000 Hiroshima-sized bombs.”

Each year, operators must remove a third of the radioactive fuel rods from their reactors because they have become contaminated with fission products. The rods are so hot they must be stored for 30 to 60 years in a heavily shielded building continuously cooled by air or water lest they burst into flame, and must afterward be packed into a container. “Construction of these highly specialized containers uses as much energy as the construction of the original reactor itself, which is 80 gigajoules per metric ton,” Caldicott says.

What’s a big construction project, though, when you don’t have to pay for it? In the 2005 Energy Bill, Congress allocated $13 billion in subsidies to the nuclear power industry. Between 1948 and 1998, the US government showered the industry with $70 billion of taxpayer dollars for research and development —–corporate Socialism if ever there was any.

Caldicott points out there are truly green and clean alternative energy sources to nuclear power. She refers to the American plains as “the Saudi Arabia of wind,” where readily available rural land in just several Dakota counties “could produce twice the amount of electricity that the United States currently consumes.”

If we do not grab hold of such green alternatives, we, like Japan, as Murakami warned, will “repeat the same mistake again.”

Sherwood Ross is a Miami-based public relations consultant who also writes on political, social, and military topics. Reach him at [email protected]