Home Veterans Israel Deal Gives Them Missle for US Threat 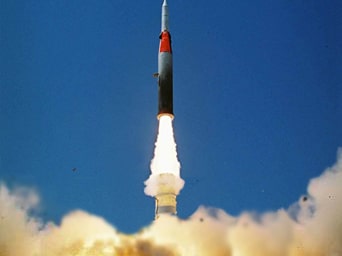 A year and a half ago, I announced on Pakistani television that there was a deal between Israel and India that would provide 10 ICBMs to Israel, each capable of carrying 10 MIRV (Multiple Independent Reentry Vehicles) warheads with a range of over 11,000 kilometers.

India has leaked misleading information to the press about a new Surya missile with 8000 km range, based on combining liquid and solid fuel stages from various boosters from their military and space program.

Most noticeable of all is the silence.

Israel is said to possess 10 weapons, 100 warheads total. India is said to have built/purchased 10 times as many, enough to offset the balance set by START 2, were the US not constrained from broaching the subject.

Why? Because of an inability to prioritize national defense issues whenever Israel hits the “kill switch,” believed to be operated by the Israel/AIPAC lobby in Washington which many think has endangered America.

Their new weapons are, in fact, former Soviet inventory of reliable liquid fueled boosters capable of operating from mobile platforms.

Why reinvent the wheel?  Press “tales” of Indian efforts to produce an ICBM since 1994 though India has no potential use for such a system, certainly not against China, a nuclear power well beyond India’s scope, one capable of arming Pakistan and flanking India, making her strategic position less than hopeless, are pure rubbish.

These ICBMs are “show and tell,” to put supposed “muscle” behind the empty threats of Israel’s deteriorating position, her crumbling military and India’s inability to formulate any cohesive foreign policy.

These are weapons, because of their MIRV capability, that are “disallowed” for use by Russia according to the provisions of START 2.  Platforms such as this, with multiple warheads on a single launcher are considered a liability when warhead numbers themselves are the limiting factor.

This configuration had become “unfavourable.” India is being suckered.

Thus, the stories of scientific advances out of India were just overshadowed as Israel took the center stage in releasing misleading technical information on a missile they never developed whose only possible purpose is the intercontinental delivery  of nuclear weapons they are not allowed to have against an ally that subsidized the weapons themselves.

America is being suckered.

Untitled from Gordon Duff on Vimeo.

All reporting, intelligence sites, think tanks, news organizations, all of it is either dated or childishly misleading. The partnership between Israel, India and Russia has been penetrated for years.  I have seen the documentation.

Russia, other than peddling oil, sees destabilizing military technologies as a way of offsetting America’s Bush era attempt at world dominance, a policy long put away by President Obama.

They are and always have been spy organizations.  This is the single worst kept secret in history.

The weapons themselves are, because of range, useless against any target except one, the United States.  They represent Israel and India’s promise of joining the new Greater Russia of Vladamir Putin.

Russia believes it is buying their loyalty by giving them a proverbial “penis transplant” as defense analysts see such things.

That the weapons themselves are totally useless is unimportant as the individual driving the effort, Netanyahu, has never been overburdened with an excess of good judgement.

This is just another of Netanyahu’s betrayal games. In fact, betrayal is his only game.

Israel “jumped ship” on its shaky alliance with the United States when President Obama took office, opting for an alignment with Russia, a nation that has been reassembling the old Soviet Union piece at a time.  That process has taken on a new vigor based on Russian anger at the US for flooding their streets with heroin from CIA sources in Afghanistan.

Israel had jumped before when Israeli spy, Jonathan Pollard, sent key NATO defense secrets to Israel who passed them to the Soviet Union, nearly bringing about World War III.

In response, Russia has prepared to move against, not just the “narco-transit” governments of the “Stans” but the Ukraine as well.  The “misunderstanding” with Georgia two years ago was but a “warm up” for what is to come.

Though theoretically under American protection, Russia has been sending technicians to Israel, many of them reportedly settling in the West Bank, areas seized from Palestinians who have held this land for centuries.

Israelis of Jewish heritage complain that their new Russian neighbors aren’t even Jews and arrive by the planeload.

Israel, along with Syria will represent, covertly for the present, a Russia outpost in the Middle East.

Though flanking NATO, blocking its growth and expansion is part of this, more importantly is the economic bloc planned.  Recent steps taken by Pakistan’s civilian government toward India are part of this.

An agreement protocol between Israel and Syria has existed for many years, threatened by Arab League moves against Syria this week.

A secondary protocol between Israel and religious and political factions in Iran were learned of over the past two weeks as was the presence of nuclear weapons from the Ukraine which Iran has held for years, a secret to very few it seems.

In response, America’s allies, Saudi Arabia and the UAE have approached China this week to purchase nuclear weapons.  Were one to believe Wikileaks, one would think both countries were fearful of Iran and under the relative control of the United States and its Israeli influenced government.

To the contrary, Saudi Arabia and the UAE are increasingly suspicious of Israel, noting that Netanyahu, in response to “Arab Spring” uprisings has begun to seem unstable.

It is their believe he will be removed by the IDF or other “services” in Israel as is the tradition.  In case he isn’t, it is their belief that Israel is a genuine threat.

The biggest threats to Israel, those putting the most pressure on Netanyahu are from 3 directions.  President Obama has become increasingly hostile to Israel.

The French, as seen at the “Open Mike” incident at the G 20 conference also believe Netanyahu to have had a “break with reality.”

Only British Prime Minister Cameron has stuck with Netanyahu though private reports among his close associates indicate that his position has become threatened due to his alliance with Israel.

If history is to repeat itself, and it generally does, Russia is “cruising for a fall,” and not for the first time.

Russian money has been pouring into Africa, the Mediterranean and Europe, buying land, homes, businesses  with foreign currency reserves they fear will be useless soon.

In the interim, Russia has been distancing itself from China.  Despite the phenomenal growth the west sees, China faces economic collapse.  As western markets deteriorate along with their currencies, China is left “holding the bag,” ramped up for economic growth in partnership with a world whose economies are contracting.

The Russian plan is simplistic in nature.

They seek a society more feudal than socialist, surrounded by weak neighbors with an appetite for expensive weapons and a resistance to influences they mistakenly label “American” when the term “globalist” or “global/zionist” might be more accurate.

We wish them luck with that.

As for America, its “bestest friend in the whole world” is now targeting nuclear weapons at North America.

Israel, long a nuclear power, now feels it must join a club where the membership dues are a bit beyond them.

We wish them good luck with their new game as well, they will need it.