Home Veterans A Nuclear-Armed Iran: A Blessing In Disguise 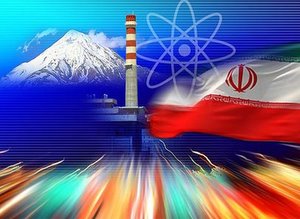 I was actually shocked when I saw the news on my laptop about the casual exchange between Nicolas Sarkozy and Barack Obama in Cannes, France, over microphones that were inadvertently left open. Sarkozy tells Obama, “I can’t stand to see him anymore, he’s a liar.”, referring to the Israeli PM Netanyahu; to which Obama responds, “You are fed up with him, but me, I have to deal with him every day.”

I was shocked not because I was surprised to hear the honest feelings of two among most global leaders regarding the Israeli Prime Minister, but because, when it comes to news about the Jewish state, the American and European media are usually extremely careful not to reveal anything that might blemish Israel’s pretty face. But, here it was; what many already knew but weren’t supposed to talk about was suddenly out there for the world to see.

But the world did not, and will not, get a chance to hear any in-depth review or analysis of the potential implications or ramifications of that exchange. The event has already been pushed under the rug and damage control, both here and inEurope, is underway.

The supposedly free and uncensored Western media have thus far only tangentially glanced at the topic with bemused, dismissive casualness of discussing, say, Mr. Obama’s efforts to quit smoking or how some bimbo celebrity was dressed at the Country Music Awards event!

We are being bombarded with the alarming news of possible Israeli and/or American military attack on Iran and potentially opening the gates of Hell in the process. We are talking about another step closer to a WWIII if the crazies are allowed to implement their objectives.

As the global economy nears potential collapse and socioeconomic chaos seems to be spreading out of control, the prospects of another war in the Middle East should be taken more seriously than even the earth shaking news about the Pizza Man’s sexual misadventures some twenty years ago, or Rick Perry’s not remembering the third federal department he’d eliminate as the President.

Does Veterans Day mean anything anymore? Is going to another war, bloodshed and mayhem just another source of entertainment, like the Tonight Show or Monday Night Football, in the media’s mind?

The increasing intensity of steps currently underway to create the groundwork in the public domain to initiate a war with Iran is strangely taking the back seat to Penn State sex scandal and Mat Lauer’s globetrotting adventures. All this, while the media hype about Iran’s nuclear ambitions and the West’s reaction could lead to a global catastrophe more horrendous than Vietnam. Remember, it’s Veterans Day!

Does this make any sense?

There’s little doubt that Israel is the actual ringleader or master manipulator behind the big hype about Iran, and Netanyahu’s bark is getting louder about Iran’s alleged nuclear bomb projects and the need to eliminate that possible threat by preemptively bombing Iran’s strategic targets.

So, what’s really going on here? To answer that question, let’s start with another one:

What is the best thing that could serve the agendas of the Likud-led Israel?

Answer: A nuclear armed Iran, in actual fact or perceived as fact!

I am not the only one who thinks that the threats of regime change and military attacks against Iran during the past decade have been giving the Iranians more reasons and justifications to beef up the nation’s defenses and even to acquire the technology needed to create the ultimate deterrent, the nuclear weapon. Most impartial observers in the field are of the opinion that the Iranians are still in the process of acquiring that technical knowledge, with so far no assurance that the regime would actually embark on developing the bomb.

The most recent IAEA report is no more than a slightly modified, politically motivated repeat of the previous series of allegations of maybe, could be, perhaps, and other less-than-concrete statements, where the interpretation or conclusion by any observer depends entirely on the observer’s own motives and agendas.

Again, I am far from being the only analyst who believes that, should Iran ever manage to obtain or manufacture a nuclear device, it would only serve as a deterrent. It would not be to Iran’s advantage in any conceivable way to initiate an attack on anyone, near or far, with or without a nuclear capability. And that includes attempting to wipe Israel off the face of the map, a phrase that was cunningly and deviously  attributed to the Iranian President Ahmadinejad a few years ago, an absolute lie that has now been established as a historical truth, like so many other so-called undeniable truths that have wormed their way into our untouchable historical archives.

It seems as though the nonstop allegations, accusations, sanctions and threats were designed to push the Iranian regime toward procuring nuclear capabilities and, at the same time, empowering the hardliners within the Iranian government to impose stricter controls against any internal opposition that seemed potentially likely to weaken the regime. This combination of imageries assured the success of the portrayal of the Islamic Republic as a dangerous, unpopular rogue state that aimed at destabilizing the oil-rich region for gaining control over the industrial world’s bloodline, oil, and ultimately pushing the West’s only vanguard or sentinel, Israel, into the sea.

The Israeli regime has been, and continues to be, benefiting from this charade. And as long as this portrayal of Iran remains at play in the public domain in the United States, the American Congress and the Executive leadership see clear sailing, albeit begrudgingly (hence Obama’s comments to Sarkozi about Netanyahu), in accommodating the Israeli demands in exchange for the support of the powerful Zionist lobby and its vast tentacles, come election times.

No doubt Israel is facing hard times. It is increasingly isolated and mistrusted globally, its manipulated (by the United States) alliances with Egypt and Turkey are rapidly breaking up, and its image as a ruthless apartheid regime that remains in violation of international law and the UN Security Council resolutions is not helping it either.

The only thing that is helping the Jewish state stay afloat is the financial, military and diplomatic support by the United States through a parasitic relationship that is gnawing on the host and benefactor.

Interestingly, and as expected, no matter what the Israeli regime does that raises the ire of the international community, the negative global reaction is taken by the Zionist mind as yet another proof why Israel, in dire straits, deserves more friends and assistance. This reminds me of the oft repeated anecdote about the Jewish boy who kills his parents and demands mercy because he has been orphaned!

Quoting LA Times: Abraham Foxman, national director of the Anti-Defamation League, faulted the president for not disputing the claim that Netanyahu is “a liar.’’ “President Obama’s response to Mr. Sarkozy implies that he agrees with the French leader,’’ Foxman said. “In light of the revelations here, we hope that the Obama administration will do everything it can to reassure Israel that the relationship remains on a sure footing and to reinvigorate the trust between President Obama and Prime Minister Netanyahu, which clearly is not what it should be.’’

Back to the topic; initiating a new war in the Middle East is quite clearly to nobody’s advantage, not even to Israel’s, and definitely not to America’s. But how do we avoid getting into this catastrophic mess in the face of the unrelenting barrage of hostile rhetoric, fabricated stories of assassination plots and baseless IAEA insinuations against Iran?

I submit that the only way to prevent the lit fuse to reach the powder keg is to assume that Iran already has the dreaded nuclear weapons and the capability of launching them aboard their successfully tested missiles.

We are actually pushing the Islamic Republic in that direction and we have been doing that for some time. If we drag our feet and continue playing this cat and mouse game a little longer, as we are actually doing, it would give Iran enough time to at least appear as though the goal has been achieved.

sit msnbc.com for breaking news, world news, and news about the economy

The benefits of a nuclear-armed Iran

1- First of all, a nuclear capable Iran would not benefit in any conceivable way by using this weapon to initiate any aggression regionally or globally. The worst case scenario would be if Iran might use this deterrent capability to engage in other types of regional adventurisms with greater impunity. That possibility, however remote, leads us to the next point:

2- Our clients Gulf states, supposedly fearing Iran’s emboldened ambitions, will be sold tens of billions of dollars worth of American made arms, mostly outdated or obsolete stuff, and technical assistance to protect themselves against their big, powerful neighbor.

3- Large scale sale and shipment of arms to the Arab regimes would automatically force the US Congress to approve increasing military, financial and diplomatic aid to the Israelis to “defend their lives” by maintaining Israel’s military superiority against the combined forces of the entire Arab states.

4- Furthermore, under such circumstances, it would appear increasingly “unfair” to press Israel to bow to international pressures to compromise anything toward the settlement of the Palestinian grievances and other illegal or inhumane activities.

5-  Israel would no longer be expected or pressured into disclosing its own nuclear arsenal or to join the IAEA, and the whole concept denuclearization of the region would become a moot point, especially when there is actually no likelihood of ever implementing such program on a global scale.

6- With an already nuclear-armed Iran, there would no need to continue ever harsher economic sanctions against the Islamic Republic, as the main purpose and justification for the imposed sanctions was to prevent Iran from accessing the nuclear weapons.

7- That would open the door to a rapprochement with Iran, which would reinvigorate Iran’s economy and boost its trade with the West, particularly the United States, and channel much of Iran’s resources and markets away from the East and toward the West.

8- The normalization of relations with the West, particularly with the United States, will undoubtedly lead to a moderation of the current “state of emergency” antidemocratic internal policies in Iran, and tilt the scale in favor of reform oriented, more secular liberal elements, a much anticipated and long awaited social evolution.

Kam Zarrabi is the author of In Zarathushtra’s Shadow and Necessary Illusion. He has conducted lectures and seminars on international affairs, particularly in relation to Iran, with focus on US/Iran issues. Zarrabi’s latest book is Iran, Back in Context.
More information about Mr. Zarrabi and his work is available at: intellectualdiscourse.com 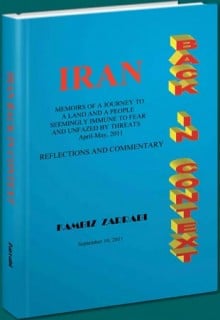 Double Vendetta: The Insanity of the Iran Confrontation