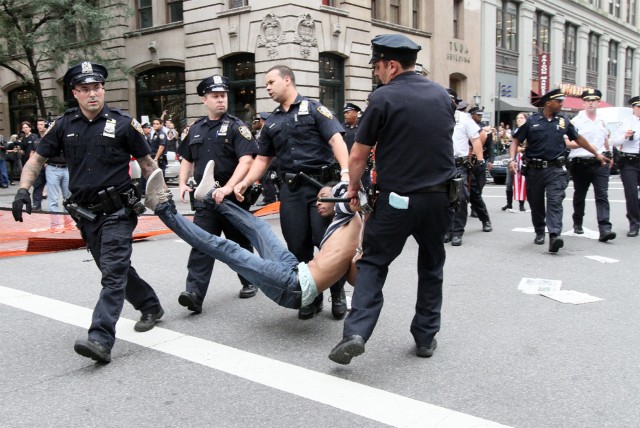 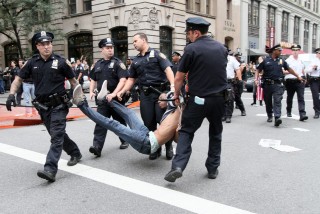 Similar Tactics in Use Throughout the Country

In recent days, a pattern has appeared across the country in the actions of police in dealing with the peaceful protesters taking part in the OWS movement. This coordinated effort leads many to suspect the dark presence of the Federal government in what should be a local event.

The recent police attacks in New York and Oakland are just the tip of the police state takeover. The protesters have received threats from police in many cities across the country, including Portland, OR, Chicago, IL, San Francisco, Dallas, TX, and Atlanta, GA.

Veterans of Iraq and Afghanistan who were present report that the police have used weapons and tactics on these peaceful gatherings that the military are prohibited from using in war zones. The police attacks show a pattern. They “justify” these attacks based upon fictitious claims that the occupiers are creating a health hazard, or a fire hazard, or a crime problem, based on no real evidence.

They also find old, obscure laws and vague anti-homeless statutes to justify their actions. Then the police attack in the middle of the night, dressed in riot gear and heavily armed with mace, pepper spray, clubs, hand cuffs, tear gas, assault rifles, and so-called flash-bang stun grenades–all potentially lethal weapons to be used against peaceful demonstrators.

Heidi Bogosian, executive director of the National Lawyers Guild, which has been providing legal services to the movement puts it this way.

“We definitely feel, especially in a movement like this that has arisen so quickly in a number of cities, that there will be a coordinated national effort to try and shut it down. We see the scapegoating of these movements, the attacks at night, and in general tactics designed to terrorize and to scare protesters away. I can’t see this as anything other than centrally coordinated.”

In a radio interview on San Francisco station KALW, Oakland Mayor Jean Quan admitted to being a part of a conference call among 18 city mayors. Quan’s former advisor, Dan Siegel, an Oakland attorney confirmed this call. After November 14 when Oakland police made a midnight attack on the protesters to drive them out of the park using military style equipment, Siegel resigned in disgust. It is not clear whether the conference call was initiated by one of the mayors or a Federal agency. No one who was involved is talking.

On Oct. 25, shortly after this call allegedly occurred, Quan ordered the first police attack on the occupy Oakland protesters. It was during this attack that Iraq war veteran, Scott Olsen was shot in the face with a hardened aluminum tear gas canister causing a severe brain injury. When others tried to help him, the police threw a flash-bang grenade into the middle of the crowd.

Both Siegel and Boghosian say they strongly suspect federal involvement in the planning of the recent rash of police violence against occupiers. Siegel states,

“It’s only logical to assume that the ‘Fusion Centers’ are involved, especially after the Oakland occupiers shut down the port in Oakland.” Says Boghosian, “What we are seeing here is the Miami model, with various levels of law enforcement, local, state and federal, all at work. It would be shocking if federal law enforcement were not seeing this occupy movement now as a national security threat 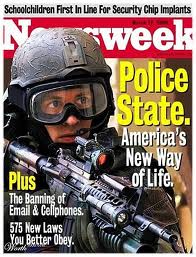 For those who have not heard about the “Fusion Centers’  that Siegel mentions, 72 of them, located across the country were set up following 9-11 at a cost in excess of half a billion dollars. Under the Department of Homeland Security they are tasked with bringing the FBI together with local law enforcement departments. Their stated goal is to “both collect and share domestic intelligence, and serve as command centers to direct local law enforcement in helping implement national law enforcement goals.” There are also many Joint Terrorism Task Forces, which directly link the FBI with urban police departments.

“These crackdowns on the occupation movement certainly appear to be part of a national strategy to crush them. We haven’t yet found overt evidence of federal involvement, but the fact that in rapid succession local authorities have taken action raises the specter of coordination. There is absolutely no legal justification for the involvement of the Joint Terrorism Task Forces in this movement. These demonstrations are not terrorist activities, and police should not be treating them as such, yet all over the country the police are treating the protesters as if they are criminals. The similarity of the response everywhere to the movement makes it appear that there is a coordinated strategy.”

Former advisor to President Ronald Reagan, Paul Craig Roberts had this to say about government actions against anti-war protesters. The OWS people get the same treatment

Examiner.com reporter Rick Ellis is reporting that an unidentified US Justice Department official has confirmed what Boghosian, Siegel and Veheyden-Hilliard say they suspect is the case: that each of the recent brutal police evictions and attacks on occupation groups “was coordinated with help from Homeland Security, the FBI and other federal police agencies.” Ellis goes on,

“According to this official, in several recent conference calls and briefings, local police agencies were advised to seek a legal reason to evict residents of tent cities, focusing on zoning laws and existing curfew rules. Agencies were also advised to demonstrate a massive show of police force, including large numbers in riot gear. In particular, the FBI reportedly advised on press relations, with one presentation suggesting that any moves to evict protesters be coordinated for a time when the press was the least likely to be present.”

In a story published early Wednesday, The Associated Press reports that mayors and city leaders in as many as 40 cities were communicating about coordinating an attack on the occupy movement. Again, this appears to be at the direction of a Federal agency.

It seems cruelly ironic that so many of our sons and daughters have put their lives and health on the line to provide freedom for Iraqis and Afghans only to return home to a police state. There is something definitely wrong with this picture.