“When Mona Eltahawy sneaked into the street where the fierce scuffles broke out between the pro-democracy protesters and the police forces little did she know that she was taking a leap into the real story of the battle of Egypt revolution.” 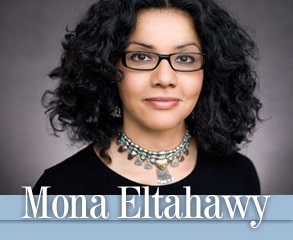 “She is an award-winning columnist and an international public speaker on Arab and Muslim issues and she is now based in New York.” … With those words Mona Eltahawy introduces herself to the reader of her elegant website.

But though she went on and briefed the readers, in the bio block, on her professional history and some of the important highlights in her career, nothing really expressed who she really is like the notice line at the header of her blog that says “Mona Eltahawy, an Egyptian from the inside and outside”

For me Mona Eltahawy is more than just a renowned reporter, or a public speaker, she is an Egyptian, who despite growing up in one of Egypt’s most repressive eras where political dictatorship and religious obscurantism have stifled modernity and freedom of expression, emerged as one of the prominent examples of the progressive, outspoken and liberal woman in Egypt’s contemporary history.

She is a feminist, and though she has been living in the United States since the year 2000, she never severed her emotional bonds with the land of her birth. In almost all of her lectures, articles and media interviews she always shed the light on the wind of change sweeping the Arab world and how this would impact the freedoms and human rights especially for the Egyptian woman.

With Egyptians pouring in thousands again into Tahrir square to protest against all of the hidden forces that are trying to co-opt and hijack the Egyptian revolution Mona Eltahawy simply couldn’t see herself any place else.

Appearing Thursday night on Egyptian satellite channel- ON TV– Mona Eltahawy with both her arms in plaster cast told the most appalling story of her abduction by the security forces near Tahrir square the day before.

As the mainstream media was covering the violent clashes between the Tahrir protesters and the Egyptian police forces that have been raging since Saturday the reporter inside Mona decided to get a closer look.

Under the thick fog of tear gas and the indiscriminate rounds of rubber bullets that turned one of the main streets- Mohamed Mahmoud st.- leading to Tahrir square into a battle field, Mona got trapped in an ambush as the protesters suddenly retreated to find herself surrounded by police soldiers.

That much of the story of the police/protesters clashes we knew from the media, but what we don’t know is what exactly happened to the 1200 plus protesters the police had captured during the clashes and mainly in that street leading to the infamous building of Egypt’s ministry of interior. … The arrest of Mona Eltahawy helped us find out.

Actually this was not only the missing part out of the Tahrir story but it also turned out to be the hidden story of one of the reasons why this whole revolution erupted in the first place.

On the TV interview Mona sorrowfully but unshakably recounted the story of her abduction, beating and sexual molestation by the police soldiers

“Besides beating me so monstrously my left arm and right hand were broken; the dogs of (central security forces) subjected me to the worst sexual assault ever. Five or six surrounded me, groped and prodded my breasts, grabbed my genital area and I lost count how many hands tried to get into my trousers.” Mona said.

Mona had been abducted from that street by the most savage security forces, moved to the ministry of interior where she was under the constant danger of being sexually harassed and then she was transferred to the military intelligence headquarters where she was detained for like five hours.

During those long hours Mona was locked in a room, absolutely deprived of any human right of being read her rights or knowing why she was arrested and not even allowed to make a phone call to let her friends know where she was.

Now most of us have watched scenes like these in the movies, but this was no fiction. This was real.

This kind of unbelievable tyranny and oppression is what the Egyptians have been enduring for ages.

Many are wondering why Egyptians have been carrying on since the ouster of Mubarak, almost 9 months now, with no security on the streets, and why the police forces are now back to business as usual. But those people are not aware of the fact that Mubarak’s regime, as well as the regime of his predecessor was simply a police regime.

Hence, choosing January 25 – the national police day in Egypt- as the launch day for the revolution was no coincidence.

And when the head of a police regime goes down you don’t get to see the police as often as you used to or as friendly and protective as you might expect. And this also explains the vengeful brutality of the police in their latest crackdown on protesters whom they view as the main reason for the demise of their long-time mighty regime.

In that extremely painful experience, Mona has lived moments of fear, humiliation, pain and vulnerability.

But those are the very same feelings most Egyptians are experiencing in their daily life and they don’t even have to get arrested to feel degraded or vulnerable; all they have to do is to queue up in a long line that could drag out for hours just to buy a loaf of bread or sign the endless papers to apply for an ID card or a driving license or wait their turn to get examined in a hospital which has no beds or medication for them.

And you could get arrested anytime anywhere in Egypt and practically for a crime you probably never heard of before. And before your folks knew about it you could be thrown in some filthy and overcrowded cell waiting to be tried before a military court where your appointed lawyer- if you were allowed one in the first place- could not examine evidences, call any witnesses or even appeal the verdict.

Mona Eltahawy will have to live with the memory of those horrible hours for the rest of her life, but most Egyptians will have to indefinitely endure through this humiliation and vulnerability if they failed to save the Tahrir revolution they all hope would help fulfill their demands of freedom and social justice.

When Mona Eltahawy sneaked into the street where the fierce scuffles broke out between the pro-democracy protesters and the police forces little did she know that she was taking a leap into the real story of the battle of Egypt revolution.

When Mona was released from her detention, thanks to her American passport, she didn’t jump on the first flight back to the US, but she headed straight to Tahrir square where she joined the thousands of angry Egyptians and wholeheartedly shouted with them “ down with the regime”.