Home Life Isms Can Drive Us Nuts! What Is Chiliastic Millenialism? 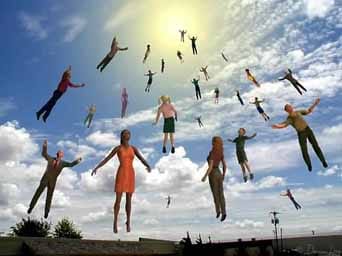 Jargon is a technique for curbing outsiders from understanding what is going on. The jargon of theologians cloaks a whole lot of every day chicanery and turns religion into an enemy.

If I were a lot smarter, I would strive to be a philosopher. Since the ‘smarter folks’ have totally botched it, I see no harm in writing this kind of stuff, If it makes one person think outside his comfort zone, it may be worth it.

To answer the heading question—chiliaism is from early, early church millennialism, where a couple of the early writers believed that Jesus would ‘return’ to reign on earth for a thousand years, and in order for it to work in the bleeped up world, all the Jews would need to be converted. Oy!

Dr. Robert Sungenis, a devoted catholic scholar says he spent 35 years digging into the notions and came up empty.

Evangelist Protestants grabbed the concepts and ran with them until we now have a ‘Christian’ culture of war-mongering neocons. Nearly all the bible-believing Christians I know, blame Darby and Schofield for the scripture twisting that brought us Michelle Bachmann. Sarah Palin and Pastor John Hagee, and let’s not forget that smarmy South Carolina Senator , Lindsey Graham.

To stay on topic, Dr. Sungenis, wrote a review of Michael Jones’ book, “The Jewish Revolutionary Spirit,” Which I heartily recommend to readers. The in-depth review was published in the May 2008, issue of Culture Wars, a magazine dedicated to combating the subversive Jewish influences in our Society..

“The only point in the book, ‘Dr. Sungenis wrote “on which I take issue with Dr. Jones is his belief, admittedly a very popular belief among Catholics, that just prior to the return of Christ we will witness a large conversion of the Jews.”

“After extensive study of this issue for the past 35 years, I have come to the conclusion that there is no solid evidence to support the claim. Similar to dubious belief among many of the Church fathers that the ‘Sons of God’ of Genesis 6:2 were fallen angels who impregnated human females of their choosing, the idea that there would come in the distant future from the evangelistic efforts of a resurrected Enoch, or Elijah was based on a very shaky theological foundation.

“It was an idea in the chiliastic eschatology of the very early fathers e.g. Irenaeus, Justin, since they believed that a very large number of converted Jews would be needed to rule in a 1000 year reign of Christ on earth, otherwise known as millennialism.’ But when the Catholic Church officially rejected Millenialism at the Council of Ephesus., a rejection later seconded by PiusXII, somehow the mass conversion of the Jews theory hung on in later patristic writings, even though the new anti-chialistic eschatology introduced by Augustine really had no practical use for it.

“The only passage that believers in a future
Jewish conversion point to, both then and now, is Romans 11:25-6, but as the history of interpretation shows, not one patristic or medieval theologian ever did a thorough exegesis of the passage to demonstrate how such a conclusion can be logically and safely derived from those verses.”

Sungenis points out that Michael Jones ‘recognizes, when all is said and done, this is a spiritual battle. It is a battle for who will win the Jewish soul—Christ or the devil.

“Jones wrote: ‘The final collapse of Jewish resistance to Logos will take place when they have reached the pinnacle of worldly power. At no time in the pas 2000 years have Jews had more power than now. The Jews possess Jerusalem and, according to reports, plan to rebuild the Temple, lending credence to the belief the stage is set for that last great battle over who will rule the Jewish soul.”

If this battle is ‘spiritual’ What’s all the crap about an ‘earthly’ kingdom? More manipulation?

“My Kingdom is not of this world.”