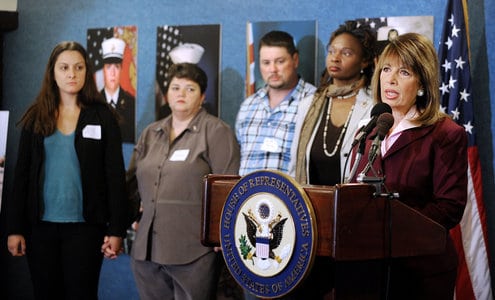 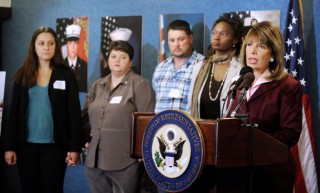 WASHINGTON – The Department of Veterans Affairs has released a series of videos in which women Veterans describe their experiences serving in the military, ranging from their significant contributions to national safety and security to the challenges they faced during their service and after returning to civilian life.

“These videos show the important contributions women have made to this country through their military service,” said Secretary of Veterans Affairs Eric K. Shinseki. “Women Veterans have earned the respect of a grateful Nation for their tremendous service and sacrifice.”

The three- to five-minute videos are part of VA’s ongoing “Rethink Veterans” campaign to increase awareness of women Veterans and their vital roles in our nation’s history.  The videos can be viewed at www.womenshealth.va.gov or on YouTube: http://www.youtube.com/user/VeteransHealthAdmin.

The four stories just released were recorded during the July 2011 Women Veterans Summit in Washington, D.C.  Women from all eras, conflicts, and service branches were invited to share their experiences.  VA plans to release several video vignettes over the next few months.

The first four videos include an Army Reservist who served nine years stateside before deploying to Iraq post-9/11, a Vietnam War era nurse who returned from combat with a new sense of family, a Navy Veteran who advocates for expanded roles for women in the military, and Brigadier General Wilma Vaught, the first woman to deploy with a Strategic Air Command bomber unit.  The videos are meant to increase awareness of women’s roles in the military among VA staff and the public.

“We’re challenging people to rethink preconceived notions about who is a Veteran, what a Veteran looks like, and what a woman Veteran may have done or experienced while serving,” said Dr. Patricia Hayes, chief consultant of VA’s Women Veterans Health Strategic Health Care Group. “Getting this message across, both inside and outside VA, is important so that women Veterans receive the respect, recognition, and care they deserve.”

In addition to the videos, VA recently released a 60-second public service announcement (PSA) about women in the military.  The PSA is available for viewing on YouTube: http://www.youtube.com/watch?feature=player_profilepage&v=BOP5DCgjxPE and www.womenshealth.va.gov.  Broadcast organizations interested in obtaining a broadcast-quality version of the PSA should contact VA’s Office of Public Affairs (202-461-7600).

For more information about VA programs and services for women Veterans, please visit: www.va.gov/womenvet and www.womenshealth.va.gov