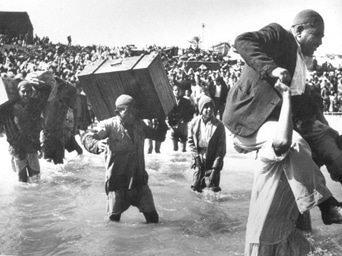 Americans are largely ignorant of the historic facts presented in the Internet essay below. It is put forth via Chuck Carlson’s ‘We hold these truths.org website’:

The greatest enablers of Zionist chutzpah, which threatens the world. are America’s oxymoron Zionist Christians, who have no more implacable a challenger than Carlson, who is a real Christian, who has opposed the likes of John Hagee and Pat Robertson valiantly for many decades (pointed out by Gordon Duff months ago. Here: Video: The Roots of Christian Zionism

I have supported Carlson’s efforts for many years, (at Radio Free America & Liberty Lobby) and want everyone to read the poignant history he brings up.

As long as I can remember, the audacious liars for Zionism have denied the facts of this history. No history curriculum in America tells it this way (the truth of it). And only over the Internet, especially here at VT, does one get such a counterbalance to Zionists.

There is a new video on Zionist chutzpah, put up just today, as you will see, even when the info comes from the far left, there is censoring—the video was “removed.” Netanyahu to Israeli Jews: Don’t Marry Americans.

November 29, 1947 was the date the UN passed the Partition Resolution partitioning Palestine, more or less equally, into a Jewish and an Arab state.

In fact, the ethnic cleansing commenced the very next morning when the 75,000 Arab citizens of Haifa were subjected to a campaign of terror jointly by the terrorist group, the Irgun, under Manachem Begin, and the Haganah, the regular militia under David Ben Gurion. The Jewish settlers who had arrived during the previous decade had built their homes higher up the mountain and thus occupied a higher topographical space. From the superior height, they could snipe at the villagers at will. They began doing this while the Jewish troops rolled barrels of burning oil down their roads and then ignited them. When the terrified residents came out to try to extinguish the rivers of fire, they were sprayed with machine gun fire. Another techniques was to deliver cars filled with explosives to Arab garages to be repaired, and then to detonate the cars in the garages.

On its website, the official historian of the Palmach (a special unit of the Haganah) states, “The Palestinians [in Haifa] were from December onwards under siege and intimidation.”

This was the beginning of the ethnic cleansing and occurred six months before the first regular soldier from a surrounding Arab state entered Palestine, which was on May 15, 1948.

I remind you that the Deir Yassin massacre occurred on April 9, 1948, and also that by May 15, all of the major cities of Palestine had been cleansed of Arabs and about one half of the 750,000 to 800,000 Palestinian refugees has been ethnically cleansed.

This was the beginning of the expulsion of the Palestinians Arabs from Haifa and from Palestine. The ending for Haifa’s Arabs came on Passover evening of April 21, when the British commander, Stockwell, called four Arab community leaders in to this office to inform them that the British army would be evacuating the city and advised the Arabs that they could not be protected. As Ilan Pappe puts it:

“Previous correspondence between them and Stockwell shows that that they trusted him as the keeper of law and order in the city. The British officer now advised them that it would be better for their people to leave the city, where they and most of their families had lived and worked ever since the mid-eighteenth century, when Haifa came to prominence as a modern town. “ – (Pappe, The Ethnic Cleansing of Palestine, p 94)

“[I]t was Mordechai Maklef, the operation officer of the Carmel Brigade … who called the shots. Maklef orchestrated the cleansing campaign, and the orders he issued to his troops were plain and simple: ‘Kill any Arab you encounter; torch all inflammable objects and force doors open with explosives.’

“When these orders were executed promptly within the 1.5 square kilometers where thousands of Haifa’s defenseless Palestinians were still residing , he shock and terror were such that, without packing any of their belongings or even knowing what they were doing, people began leaving en masse. In panic they headed towards the port where they hoped to find a ship or boat to take them away from the city. As soon as they had fled, Jewish troops broke into and looted their houses. …

“In the early hours of dawn on 22 April, the people began streaming to the harbor. As the streets in that part of the city were already overcrowded with people seeking escape, the Arab community’s self-appointed leadership tried to instill some order in the chaotic scene. Loudspeakers could be heard, urging the people to gather in the old marketplace next to the port, and seek shelter there until an orderly evacuation by sea could be organized. ‘the Jews had occupied Stanton road and are on their way’, the loudspeakers blared.

“The Carmeli Brigade’s war book, chronicling its action in the war, shows little compunction about what followed thereafter. The brigade’s officers, aware that people had been advised to gather near the port’s gate, ordered their men to station three-inch mortars on the mountain slopes overlooking the market and the port – where the Rothchild Hospital stands today – and to bombard the gathering crowds below. The plan was to make sure the people would have no second thoughts, and to guarantee that the flight would be in one direction only. Once the Palestinians were gathered in the marketplace – and architectural gem dating back to the Ottoman period, covered with white arched canopies, but destroyed beyond recognition after the creation of the State of Israel – they were an easy target for the Jewish marksmen.

“Haifa’s market was less than one hundred yards from what was then the main gate to the port. When the shelling began, this was the natural destination for the panic-stricken Palestinians. The crowd now broke in the port, pushing aside the policemen who guarded the gate. Scores of people stormed the boats that were moored there, and began to flee the city. We can learn what happened next from the horrifying recollections of some of the survivors, published recently. Here is one of them:

‘Men stepped on their friends and women on their own children. The boats in the port were soon filled with living cargo. The overcrowding in them was horrible. Many turned over and sank with all their passengers.’” (Pappe p 96)

Thus it was the Jews who pushed the Palestinians in to the sea, and not vice versa.

In March of 1948, a month earlier than the events described above, the so-called ‘Plan D’ or ‘Plan Dalet’, as a further crystallization of Plans A, B and C, was finalized by David Ben Gurion, and those who were continually in consultation with him, and distributed to the Haganah commanders. This document was a blueprint for the destruction Arab villages and expulsion of its residents, within the 78% of Palestine coveted by Ben Gurion, not the 55% apportioned to the Jewish state by the UN General Assembly. By this time 30 Arab villages had been either destroyed or depopulated. By the year’s end, 531 Arab villages would be destroyed, and 11 Arab neighborhoods in urban areas.

On revealing paragraph of this document states:

“These operations can be carried out in the following manner: either by destroying villages (by setting fire to them, by blowing them up, and by planting mines in their rubble), and especially those populations centers that are difficult to control permanently; or by mounting combing and control operations according to the following guidelines: encirclement of the villages, conducting a search inside them. In case of resistance, the armed forces must be wiped out and the population expelled outside the borders of the state.”

Between the time that Israel declared itself a state in May of 1948 and the summer of 2005, Israel killed 50,000 Palestinians, according to Israeli Historian Ilan Pappe, writing in Foreign Policy, in the summer of 2005. And since October of 2000, Israel has killed 6430 Palestinians, according to the web site, If American Knew. The latter figure averages to about 2 Palestinians killed per day by Israel (1.932, by my calculation.)

According to the Israeli Committee Against House Demolition, Israel has destroyed 34,000 Palestinian homes in the West Bank, and East Jerusalem since 1967, and, in the same period, about 800,000 olive and citrus trees in the west Bank and Gaza resulting in a loss to the Palestinian economy of $55 million, according to a recent estimate by the international humanitarian relief agency Oxfam. And in Israel’s winter assault on Gaza in 2009, Israel destroyed between 4 and 5,000 homes and either damaged destroyed as many as 50,000. Many Gaza families spent the winter of 2010 living in caves dug out of the rubble of their destroyed homes because the area is under siege with building material not allow to enter.

Israel, a state which had never clearly defined its boundaries, invites Jews from all over the world to immigrate to Israel and expand it ranks, along with its boundaries into Arab lands.

One thing is certain: Israel is not the victim, as it is constantly screaming, but the victimizer.

– William James Martin taught at Louisiana State University in Baton Rouge. He contributed this article to PalestineChronicle.com. Contact him at: [email protected].