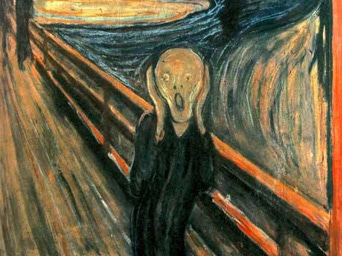 One U.S. veteran of wars in Iraq and Afghanistan attempts suicide every 80 minutes, according to new study and 1,868 veterans made suicide attempts in 2009 alone. Taught to kill in a morally unjust occupation and pacified by drugs, many returning veterans rapidly find themselves in a no-choice situation where life is no longer worth living.As such, PTSD is the silent scream that is never heard but acutely experienced.

“I cry for no reason, my country shouts treason

All the pills and the booze,

under a bright crystal moon

I died that day,

but I’m still here to say

For the brave and the free,

How fitting on Pearl Harbor day, December 7th ~ to write about America’s greatest shame ~the rapidly increasing veterans suicide rate whereas one U.S. veteran of wars in Iraq and Afghanistan attempts suicide every 80 minutes, according to a new study and where 1,868 veterans made suicide attempts in 2009 alone.  Read more:

Is it possible that sending our young people off to fight in morally unjust wars and occupations to supposedly ‘serve’ their country has not adequately prepared them for the harsh reality of witnessing and participating in both the unintentional and intentional killing of innocent civilians ~ as well as the unsettling awareness that their cause was not a morally just cause?

The answer is an unequivocal YES and this shame based guilt is a common symptom among the scores of combat veterans I have worked with in my heart centered Healing the Wounded Heart workshops ~ which includes Vietnam, Iraq and Afghanistan combat veterans. Combat vets with PTSD truly know the price they pay for the false dreams of their political leaders. See article ~

Greg Zoroya also writes in USA Today that Feelings of Guilt may be a top factor in PTSD.

Excerpt: “A leading cause of post-traumatic stress disorder is guilt that troops experience because of moral dilemmas faced in combat, according to preliminary findings of a study of active-duty Marines. The conflicts that service members feel may include “survivor’s guilt,” from living through an attack in which other service members died, and witnessing or participating in the unintentional killing of women or children, researchers involved in the study say… The idea of “moral injury” as a cause of PTSD is new to psychiatry. The American Psychiatric Association is only now considering new diagnostic criteria for the disorder that would include feelings of shame and guilt, says David Spiegel, a member of the working group rewriting the PTSD section.”

Zoroya confirms the depth of this ongoing moral injury ~ ” Half of all Iraq and Afghanistan veterans treated by the Department of Veterans Affairs have been diagnosed with mental health issues and the most common is PTSD, which is experienced by nearly 200,000 of these veterans, according to the VA. PTSD caused by moral injury can lead to more severe reactions such as family violence or even suicide, says Jonathan Shay, a psychiatrist who has worked on military mental health policies… their condition was more closely linked to an inner conflict rather than threats to their lives, the sight of bodies or blood or family problems, the study said.”

The words of Winter Soldier and combat vet Mike Prysner speak for many veterans ~ who feel betrayed by their government and know that the real enemy is our own bought politicians and Military/Industrial complex ~ that still use and teach racism to justify our illegal and morally repugnant wars and occupations of Iraq, Afghanistan and eventually, if we don’t stop them, Iran. Five minute Video ~

So now let’s talk about the moral shame and guilt of our military when they realize they are often the foot soldiers and pawns on a global chessboard ~ where they are willingly sacrificed by the whims of the kings and queens of the global financial elite as well as the Knights of the Military Industrial Complex.

Let’s use Pearl Harbor ( December 7,1941) as an example ~ On March 11, 2002, Douglas Cirignano interviewed Robert B. Stinnett , author of Day Of Deceit , in an extensive interview which asked the question Do Freedom of Information Act Files Prove FDR Had Foreknowledge of Pearl Harbor?

Excerpt: “Stinnett’s book is dedicated to Congressman John Moss, the author of America’s Freedom of Information Act. According to Stinnett, the answers to the mysteries of Pearl Harbor can be found in the extraordinary number of documents he was able to attain through Freedom of Information Act requests. Cable after cable of decryptions, scores of military messages that America was intercepting, clearly showed that Japanese ships were preparing for war and heading straight for Hawaii. Stinnett, an author, journalist, and World War II veteran, spent sixteen years delving into the National Archives. He pored over more than 200,000 documents, and conducted dozens of interviews. This meticulous research led Stinnett to a firmly held conclusion: FDR knew.”

According to Day Of Deceit ~ “In October 1940 FDR adopted a specific strategy to incite Japan to commit an overt act of war. Part of the strategy was to move America’s Pacific fleet out of California and anchor it in Pearl Harbor. Admiral James Richardson, the commander of the Pacific fleet, strongly opposed keeping the ships in harm’s way in Hawaii. He expressed this to Roosevelt, and so the President relieved him of his command. Later Richardson quoted Roosevelt as saying: “Sooner or later the Japanese will commit an overt act against the United States and the nation will be willing to enter the war…  To those who believe that government conspiracies can’t possibly happen, Day Of Deceit could prove to them otherwise. Stinnett’s well-documented book makes a convincing case that the highest officials of the government ~ including the highest official( the President) ~ fooled and deceived millions of Americans about one of the most important days in the history of the country.”  Must See full interview ~

To those who believe that government conspiracies can’t possibly happen, Day Of Deceit should prove to them otherwise ~ and remember, approximately 3000 Americans died at Pearl Harbor in what was essentially a bait and cover operation (we knew the attack was coming) which was set up and condoned by our highest officials (including the President) in order to justify a war with Japan and eventually our entry into World War 2.

Human Cost:405,000 American deaths and well over a million civilian deaths ~ including Hiroshima and Nagasaki .

Now fast forward 20 years to December 11, 1961 and remember the approximately 500,000 Vietnamese civilian deaths who died in Vietnam ~ and what was essentially a false flag operation ( Bay of Tonkin) which was set up and condoned by our highest officials (including the president) in order to justify an illegal war and occupation.

Now fast forward another 40 years to September 11, 2001 and remember the approximately 3000 Americans who died in what was essentially a false flag operation which was set up and condoned by our highest officials (including the President and Vice President) in order to justify a war and occupation of both Afghanistan and Iraq as well as an economically debilitating War on Terror.

.Now fast forward another 10 years to December 7, 2011 and hear the war drums beating again as we covertly adopt a specific strategy (in conjunction with Mossad) to incite Iran to commit an overt act of war ~ and thus justify a military attack and perhaps World War 3.

Now think of the Veterans of Vietnam, Iraq and Afghanistan who sacrificed their lives for these unjust wars and occupations and you begin to understand the moral dimensions of our combat veterans, both in the field and when they return home, and how the hardest person for them to forgive is quite often themselves ~ which accounts for their rising suicide rate as well as America’s greatest shame.

Our morally wounded veterans and rising suicide rate is the canary in the mineshaft warning America of the true human moral and economic cost for our continuing imperialistic agenda and unjust wars ~ and all for the benefit of an out of control military Industrial complex and the global financial elite.

“We are stumbling blindly through a spiritual darkness while toying with the precarious secrets of life and death…. The world has achieved brilliance without wisdom, power without conscience. Ours is a world of nuclear giants and ethical infants. We know more about war than we know about peace, more about killing than living.”  General Omar Bradley