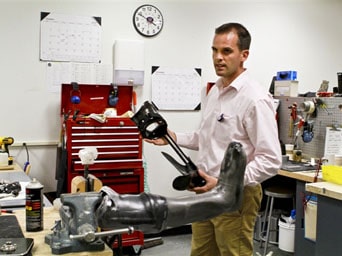 SAN ANTONIO, Dec. 8, 2011 – A wounded warrior limped into Ryan Blanck’s office at the Center for the Intrepid here one day with a plea for help.

The doctors at Brooke Army Medical Center had saved the service member’s leg after a combat injury, but due to the pain, he couldn’t walk comfortably, let alone run.

Blanck, a leading prosthetic at the state-of-the-art rehab center, found himself in an unfamiliar position: at a loss. “There wasn’t a go-to option,” he said, referring to devices for wounded warriors with lower leg injuries.

So Blanck created one. He designed the Intrepid Dynamic Exoskeletal Orthosis, or IDEO, a streamlined, energy-storing brace that delivers nearly instantaneous results. Now, most troops with salvaged limbs who wheel or limp into his office walk out a short time later, pain and limp-free.

The injured warriors are impressed by the results. When they strap on the brace for the first time and start walking, Blanck said, some stumble midway across the room, but not due to discomfort.

“They’re uncontrollably weeping,” he said. “It’s the first time they’ve walked without pain in two or three, or seven years in one guy’s case.”

Brace Proves to be ‘Game-Changer’

Blanck’s creation is a lightweight, streamlined carbon-fiber device that can be tucked under a pant leg and into a boot or sneaker. It comprises a cuff that wraps around the leg just under the knee connected to a footplate by carbon-fiber rods.

The brace works by offloading the limb and allowing the patient to operate the lower limb in a way that avoids pain, he explained. When a service member’s heel strikes, the device stores energy through the gait cycle, then delivers it back to propel the foot forward.

“That’s the concept behind it all; energy storage and power,” he said.

Prior to IDEO, Blanck noted, “there wasn’t a combination device that would allow offloading, adequate range restriction and then power generation.”

The device is proving a “game-changer” for service members with salvaged limbs, said Johnny Owens, a CFI physical therapist who is working hand-in-hand with Blanck in treating IDEO-fitted warriors. “We’re seeing immediate changes we don’t usually see,” he said.
Owens said the device also is singlehandedly helping to turn the tide on a trend of wounded warriors opting for delayed amputations — amputations several months after injury. He attributes the trend to the slow, and sometimes frustrating, recovery for troops with lower leg injuries.

“Prior to all this, limb salvage was a little bit of an unknown,” Blanck explained. “You couldn’t tell a patient, ‘you’re going to run.'”

But amputees — depending on the situation and barring other injuries — can regain significant functions about six months after amputation, he noted. Meanwhile, limb salvage patients sit on the sidelines watching their amputee battle buddies walking or running as their own progress proceeds painfully slow.

Frustrated by their limitations, some troops with salvaged limbs opted for late amputations.

“It’s enticing,” Owens said. “You’re in pain, but if you cut your leg off, you can run. Many invested a year or two in recovery and then decided to cut [a limb] off. It was psychologically frustrating to see these guys work so hard and then just cut it off.”

Thanks to IDEO, these troops now have another option, he said, that enables them to not only walk, but run, sprint and jump.

Word is spreading of IDEO and its astounding results, and Blanck now is fitting troops from around the country with his device. After hearing of Blanck’s and Owens’ success, Army 1st Lt. Matthew Anderson traveled here from his unit at Fort Carson, Colo., hoping for similar results.

Anderson, an infantry platoon leader, was injured in October 2010 while on a dismounted combat patrol in Kandahar, Afghanistan. As his unit cleared a building, he stepped on a landmine. “It felt like a jackhammer hitting my ankle,” he recalled. The explosive shattered his heel into a dozen pieces.

The doctors salvaged his limb, but the injury left Anderson in pain and with a pronounced limp. While he was able to start walking again after about six months, this strapping, lifelong athlete figured his running days were over.

It took Blanck just a few minutes to prove him wrong. With the IDEO, Anderson was walking comfortably within minutes and running within days.

“It put the biggest smile on my face,” the infantry platoon leader said. He had stopped by the CFI early one morning so Blanck could make adjustments to his device and fit him for another.

“I went from walking with a severe gait issue and a limp to walking normally,” Anderson said.

Blanck finished his adjustments, and Anderson pulled a sneaker over the foot plate and walked across the office with a smooth stride.

Once he got the brace, “I could run on it, jump vertically, laterally shuffle,” Anderson said. “Things that there’s no way I’d be doing with that much speed, efficiency or lack of pain.

“For a guy that’s in his late 20s that’s always been a jock athlete, being hampered by these injuries is pretty tough mentally,” he continued. “When you’re given the option to get back into it, it’s huge; it means a lot to me.”

Anderson soon will return to duty at Fort Carson. Of the nearly 200 cases they’ve seen, Owens noted, more than 30 have returned to service and 11 have combat deployed.

As they test and improve the current design, Blanck and Owens also are looking into what they call a “widespread potential” for people with issues such as ankle arthritis, strokes and head, back and other injuries.

The program’s success has one limitation: space. Between amputees and warriors with salvaged limbs, the CFI can get crowded at times. The pair would like to see a rehab center like the CFI, but devoted to wounded warriors with salvaged limbs. There would be no shortage of demand, Owens said, noting that for every one amputee, there are about 10 limb salvage patients.

Meanwhile, they have no plans to cut back, no matter how great the demand. Just seeing the joy in a wounded warrior’s face at walking again pain-free, they said, makes every extra hour at work worthwhile.

“I loved my job before this, but this is a whole new level.”

Palm Beach Daily News March 16, 2009 | MICHELE DARGAN Silda Wall Spitzer epitomizes the phrase “living well is the best revenge.” The Harvard-educated attorney proved Thursday that she has come a long way from a year ago, when she stood solemnly by as her husband, Eliot, resigned as governor of New York amid a prostitution scandal.

“You would have to be living on Mars” not to know that her life took “a sharp turn to the private sector a year ago,” she said.

Spitzer got a standing ovation from the roomful of mostly women who attended the Women In Power series at the Cohen Pavilion at the Kravis Center. Palm Beach’s Private Client Group at National City sponsors the series, with proceeds benefiting the YWCA of Palm Beach County. go to site cnbc fast money

Suzanne Turner, executive director of the YWCA, introduced Spitzer as someone whose “major passion in life is fostering community development and social responsibility in young people.” Turner described Spitzer as “a real child advocate.” Spitzer’s topic: women in social change.

She spoke about overcoming challenges and surviving and thriving after a challenge.

“There is something incredibly powerful about a roomful of women, and there is nothing like a challenge to test that power and that is not something we are short of these days,” she said.

The former first lady of New York showed her sense of humor right off the bat when she asked if anyone had heard the story of 10 men and one woman who were being rescued from a sinking boat by a helicopter. All were clinging to a dangling rope, but one person had to let go or the rope would break.

“The woman gave an incredibly moving speech about how she would die to save the lives of the others because, as a woman, she has had to do so much for her husband, her children, her friends, her neighbors and never expecting anything in return,” she said. “When she finished speaking, all the men were so moved they started clapping.” Spitzer, 51, displayed a photo of herself, looking shaken during her husband’s resignation.

“We women can’t control the challenges that life gives us … like a really bad time and a really bad picture,” she said. “But we are smart, strong and nimble enough to survive. That said, survival should not be enough. We should aim not just to survive, but to thrive.” A new photo flashed on the overhead screen: Spitzer looking radiant and vivacious.

Spitzer worked in the field of international law, leaving the practice to be a full-time parent when her third daughter was born. She founded Children for Children, a nonprofit group that helps young people from all backgrounds become involved in volunteering.

Spitzer describes the early days of the group as a volunteer effort meeting over her dining-room table without any funding.

“Now, 13 years later of sweat equity, Children for Children has a professional staff, a budget of over $2 million and last year alone we engaged over 100,000 kids in 27 states with our entrepreneurial programs,” she said.

“My main point today is that every one of us in this room can be a woman in social change,” she said.

Spitzer used the examples of Kate Stoneman, New York’s first woman lawyer and a suffragette who helped win women the right to vote, and Dolly Parton for her success as a singer, songwriter, actress, producer and businesswoman. here cnbc fast money

“(Dolly Parton) has promoted literacy, donating millions of books annually both at home and overseas,” she said.

Spitzer said women have to overcome challenges and transform them. “We all have to face challenges that are large and small in life,” she said. “We all face personal and professional conundrums, roadblocks and even failures, not to mention the macro-challenges of the times in which we live.” She spoke of Carolyn McCarthy, whose husband was killed and her son severely wounded in 1993 when a gunman went on a shooting rampage on a New York City commuter train.

McCarthy, a nurse, ran for Congress on a gun control platform and has been serving there since.

“At the heart of it is going back to your foundation, staying calm, assessing, making a plan that includes small, achievable goals, being grateful, retaining a sense of humor, retaining your perspective and never, never giving up,” she said.

“We cannot always, if ever, control what life gives us,” she said.

“The only things that we can control are our actions and our reactions, trying to navigate each challenge large or small and transmuting it into new possibilities.” — mdargan @pbdailynews.com MICHELE DARGAN