ED NOTE : If Sherwood Ross’ article Defense Authorization Act Will Destroy Bill of Rights is accurate when it states that the Military will be authorized to arrest and hold anyone without access to legal representation, habeas corpus, or trial, then the Law itself is unconstitutional and all it will take is a finding in the US Supreme Court to that effect to nullify it.

It is quite simple and straightforward. The Constitution of the Unites States of America clearly prohibits the Congress from passing any law which is in conflict or contradiction with any of the guaranteed provisions of the Constitution or its amendments. If the Congress wishes to pass such a law, it must first amend and gain ratification of suspension of those rights of habeas corpus, legal representation, and trial which are fundamental to the Constitution.

Now…” finding in the US Supreme Court”  just might take some doing but, that is the Law as established by the foremost and fundamental legal document in the USA,  including this one, must derive, and depend.

This law seems to be in direct violation of the principles of  Articles I, IV,V and VI at a minimum…that is forty percent of the guarantees of personal Freedoms granted directly, unequivocally and irrevocably to the people of the US.

The Bill of Rights (Amendments 1 through 10)

The grim face of totalitarianism is emerging in the National Defense Authorization Act(NDAA) now before Congress.

This bill is the last mile post on America’s sad, well-traveled road to the butcher shop of dictatorship. We have been headed that way for some time and, with a little help from Congress, we’ll arrive there shortly, putting an ugly end to the American experiment. The Senate December 1st passed the bill by a vote of 93-7.

In the name of “defense,” NDAA underwrites $662-billion for continued U.S. aggression in our many foreign wars while, on the domestic front, it incinerates the last surviving shreds of the Bill of Rights. According to the American Civil Liberties Union(ACLU), it authorizes presidents “to order the military to pick up and imprison people, including U.S. citizens, without charging them or putting them on trial.” (!!!!!!!!!!!!!!!!!!!!!) So much for Amendment VI to our Constitution that “the accused shall enjoy the right to a speedy and public trial.”

Just destroying your protection against arbitrary arrest and imprisonment means the bill’s authors Senators Carl Levin of Michigan and John McCain of Arizona don’t have to bother with junking anything else. Once you’re imprisoned you won’t need any other “stinkin’ rights.”

The ACLU charges the provisions of NDAA “were negotiated by a small group of members of Congress, in secret, and without proper congressional review (and), are inconsistent with fundamental American values embodied in the Constitution….(our) fundamental freedoms are on the line.”

A few years back, President Carter denounced the Patriot Act for authorizing federal agents “to search people’s homes and businesses secretly, to confiscate property without any deadline or without giving notice that the intrusion had taken place, and to collect without notice personal information on American citizens including their medical histories, books checked out of libraries, and goods they purchase.” The NDAA is far worse than that. 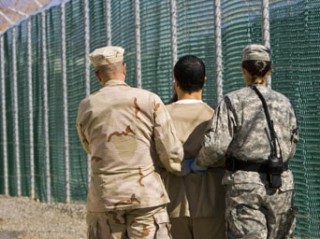 According to Noam Chomsky, the arbitrary arrest philosophy in this country dates back to the Bush regime. “The current (Bush) government,” he writes in “Imperial Ambitions”(Metropolitan Books, 2005), “has claimed rights that go beyond any precedents, including even the right to arrest citizens, hold them in detention without access to their family or lawyers, and do so indefinitely, without charges.”

“What the American People are witnessing now with this new legislation is the further development of an American Police State into a Military Dictatorship, a process that was started by the so-called USA Patriot Act in 2001,” says Professor Francis Boyle, the constitutional law authority at the University of Illinois, Champaign.

“If it is enacted into law, America will lose all pretense of having our Military subjected to the control of democratically elected civilian leaders as originally envisioned and required by the Constitution. Our experiment in 1776 will have failed,” adds Boyle, author of “Tackling America’s Toughest Questions”(Clarity Press.)

President Obama is already exercising his kingly right to rain Hellfire missiles from drone assault planes down on any human being anywhere on the planet without a legal authorization. This is called assassination as it is utterly devoid of any semblance of rudimentary justice. Unfortunately, the president appears to have no qualms about his actions. Will such a man hesitate to arrest Americans on suspicion and imprison them for years, or worse, without trial?

Adds the prescient Paul Craig Roberts, “The (Obama) regime’s objection to (the) military detention (provision in NDAA) is not rooted in concern for the constitutional rights of American citizens. The regime objects to military detention because the implication of military detention is that detainees are prisoners of war…(and) detainees treated according to the laws of war have the protections of the Geneva Conventions. They cannot be tortured. The Obama regime opposes military detention, because detainees would have some rights. These rights would interfere with the regime’s ability to send detainees to CIA torture prisons overseas.”
Perhaps this is a good time to remind swindled American taxpayers that totalitarianism is what comes of funding a perpetual warfare state that spies on all global communications, builds the greatest military in human history, assassinates foreign leaders, overthrows elected governments, invades small nations based on lies to seize their natural resources, and threatens the world from its 800 military bases.
The NDAA perpetuates all this and now endows the criminal leadership in Congress and the White House with the weapons to turn upon their own.

The only senators with guts to oppose the bill were Democrats Tom Harkin of Iowa; Ron Wyden and Jeff Merkley of Oregon; Republicans Tom Coburn of Oklahoma, Mike Lee of Utah, Rand Paul of Kentucky; and Independent Bernie Sanders of Vermont. As Sen. Paul asked during the debate, “Under the provisions, wouldn’t it be possible, then, that an American citizen could be declared an enemy combatant and sent to Guantanamo Bay and detained indefinitely?”

If you don’t call your congressperson today to stop the NDAA, you are not likely to enjoy the blessings of liberty tomorrow. The light in the torch of the Statue of Liberty has already been snuffed out by our illegal foreign wars. The final disgrace will be to imprison the beautiful lady behind the barbed wire of the NDAA.