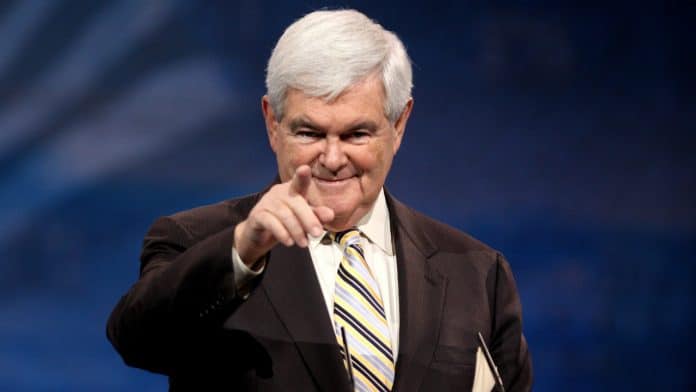 Of course, being a Palestinian American in the Diaspora whose mother happened to be born in Haifa Palestine (1939), I naturally, on a personal level, took offense. Heck wouldn’t you?  He dissed my mother!  And in America, that’s a call out.  So if you don’t mind, when I see Newt in person, I will be punching him in the nose and telling him that he’s a bully that belongs in the marginalized corner for the socially unacceptable.

But that’s just me in defense of my family.  My personal feelings aside, Newt the Bold and his proclamation really open up a discussion on American foreign policy in the Middle East and the benefits to the American people.

But before we go there, let’s put this on the table.

The number one priority for the USA is the USA. It’s jobs and the economy.  It’s America!  Not Israel!  Agreed?

So what’s with the fascination with Israel; a place populated by a few million people halfway around the world?  And why do American politicians seem to think that Israel is our number one priority? What does Israel have to do with jobs and our lives on the main streets in America?

Like all Americans, I am asking what the hell is going on.

Well, with AIPAC looming over Washington DC like an alien space ship spreading stupid gas on our political system, there is simply no hope that any U.S. politician can survive their attack.  We are dealing with the most aggressive virus to infect America ever!

Now with Israel already getting the most aid from U.S. Taxpayers than any other country in the world and with NO real genuine benefit to the 310 million Americans who pay for this robbery of the national wealth, Americans better

start paying attention because this robbery is going on while we continue to suffer through unemployment, the systematic and deliberate devolution of our middle classes, and a general loss of credibility across the world rendering the

The U.S. is impotent in both real political influence and cultural significance.

In short, We are being robbed by men in suits.  They are selling us a bag of shit telling us it’s gourmet fare.  It was okay when we were at least robbed politely but now they are doing it in our face and then telling us to piss off to boot.  Not cool folks!

Moreover, this B.S. about the promised land was cute and a nice story.  Heck, even I liked that sales pitch from these atheists posing as good Christians because it was always fuzzy and comfy.  Thanks for that security blanket.

I mean its’ always good to believe in some other world and hope for a messiah to save us.  I mean who does not want to be “saved”?

But now this dirty pitch is getting out of hand and it’s costing the real lives of real people in the here and now!  And that’s NOT responsible.  That’s reckless.  So shelve the pitch and save it for some other day.  I have kids to feed okay? 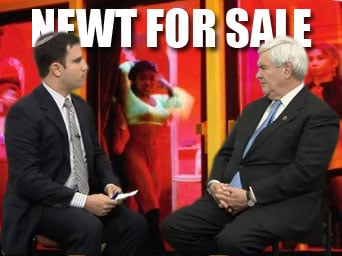 I mean that ridiculous pitch says nothing to us about our real lives here in 21st-century America.

We live under a government that no longer represents our interests run by politicians and their sponsors who are investing the proceeds of a crime all over the world and not in our own communities.  It’s straight up B.S.

I mean with unemployment effectively over 20%, cuts in real social services nationwide, a lower standard of education, embarrassing homelessness that makes us # 1 in that category, and growing real poverty in our communities, we need our monies invested in our communities, not on fanatical wars in places far far away.  This is crazy!  While our economy continues to suffer at the hands of the banksters and globalists posing as American politicians who have robbed the American taxpayer blind, we have to live with the likes of Newt and his assigns who steal from us creating havoc for the people of the world.

This is America 2011.  What the hell does Israel have to do with our lives anyway?

Absolutely nothing!  What is the rationale to back them anyway?  Democracy?  Salvation?  Fear? What?  How many jobs does Israel create for us?  Heck, they are not even in the top 20 trading partners with the USA.   Canada, China, and Mexico are 1,2,3…..get it.  Invest in our future, not in fantasy!

As with poor ole Newt for Sale, well, he’s willing to go all in and take America from quasi-honest broker to all the way in favor of a Zionist Israel without regard to the millions of Palestinians who actually live in Israel proper, the West Bank, and Gaza. This is straight-up reckless.

Heck, this maniac is putting Israelis in peril as well as Palestinians.  In fact, this reckless approach puts Newt in a new stratum of American politicians.  He’s the new 21st Century Washington guy in a suit who steals from you with his

hand in your pocket while he smiles at you and asks “hey buddy, what’s for dinner?”.  Nothing covert about Newt the Con Man.  Nope, he really is a con man’s con.

Now I do remember the days before Newt the Political Streetwalker.  Yeah, American politicians who aspired to the presidency at the very least pretended to be honest brokers.  Heck, some were truly honorable men who really tried to

aspire to justice for all mankind. But this guy clearly is NOT going in that direction. He’s a sociopath; plain and simple!

Nope, Newt, that mentally and physically obese global political whore is going 100% all out against the whole world and putting the Palestinian people on a collision course with war against the Israeli military paid for by the U.S.

Taxpayer.  Worse, by proxy, the U.S. military will eventually be called upon to pre-emptively strike against any nation that stands up to coming finishing off the genocide of the Palestinian people.

Remember, these so-called “invented people” have no army, no guns, and no jobs.  These are NOT powerful indigenous peoples yet he wants to denounce them as “invented”, as persona non-grata, so that he can wipe them out as if they were worthless faceless humans.  He’s straight psychotic!  He’s a terrorist!

Think about it.  This psycho-garbage is coming to us from an “Invented American” Newt whose ancestors came to America where they systematically took North America from the “invented” indigenous peoples.  Yes, the same Newt that has the gall to call Palestinians “invented” is the same Newt who is actually invented

But is that so shocking?  Hell no!  It’s par for the course!

This is the same guy who was mouthing off on Bill Clinton with the most horrible name-calling for having his sexual liaison with Monica Lewinsky.  yeah, he called for his impeachment while he, the more moral upstanding Newt, was having an affair behind the back of his wife who was suffering from cancer.  Good job jack-ass!  Dood, you need to get punched out!

I mean this guy is way better than any con men I have ever crossed paths with in my years running in the halls of a Las Vegas casino life.

He’s got balls! This guy is the con man’s con.  A hero among the psychotic predators.

On the surface, you gotta love the boldness of his psychosis. And it would be funny if it was not going to affect millions of men, women, and children.  I mean, heck who does not enjoy a good grift in the movies right?  But we don’t like real life, do we?  Hell no!

So really this is absolutely NOT funny.  It’s deadly serious and this ain’t no movie.  This sicko wants to be President of the USA.  He’s a dangerous man.

For Israelis and Palestinians, he must be stopped.  But much more important, for Americans, this sellout and pillager of the U.S. Taxpayer, he and his kind may be arrested and jailed before they commit more crimes against humanity.

For Newt the Atheist posing as a Christian is a direct danger to liberty, justice, and pursuit of happiness; not only for Americans but the whole world.  He belongs in jail, not the oval office.

As for his global sponsors?  Well those dark-suited psychotic predators in shades standing behind all the Newts, well someone gets a fly swatter.