The Brotherhood has matured over the past 60 years, and so have its splinter groups, for example, like Hamas.

ED NOTE: A good analysis, and quite accurate as far as anyone can predict.

The question on everyones mind is, can ‘Political Islam’ come up with functional solutions to the Arab world’s serious economic, social, educational, and multiple other problems? Their only slogan –“Islam is the Solution” — is no solution whatsoever.  God he’ll sort out all your problems, economic and all. Inshallah? Is no solution. This applies to Muslim Brotherhood and Hamas.

Depending on who one talks to in Syria, the Egyptian elections have sparked off either fear, or great inspiration — given that they have played out nicely in favour of the Muslim Brotherhood. The seculars are panicking, to say the least, watching the victory of Islamic parties in Morocco, Tunisia, Egypt, and the emergence of politically-driven politicians in Libya. Regardless if the regime stays or not, political Islam is on the rise, they claim, and the Islamists will eventually overtake the Syrian parliament in democratic elections. A closer look, however, might prove otherwise.

The Brotherhood has matured over the past 60 years, and so have its splinter groups, for example, like Hamas. They once were focused on an Islamic theocracy and resorted to violence at times, to make that happen, notably Syria in 1979-1982. They rarely accepted others and often said that their way was the only way forward for Arab society. That too has changed, and the Brotherhood-inspired Al Nahda Party for example, cannot rule in the same manner that Zine Al Abidine Bin Ali did in Tunisia, and nor can the Egyptian Brotherhood be another Hosni Mubarak.

They are now marketing themselves as moderate Muslims, closer to Turkish Prime Minister Recep Tayyip Erdogan than Osama bin Laden. People want to believe them, and have given them a chance, simply because they have not yet been tested in government.

Having said that, it is no secret that the Muslim Brotherhood, inactive and mute within Syrian society for over 30 years, has started to re-emerge, rather strongly, in different Syrian cities. In Jebel Al Zaweh in the vicinity of Idlib, for example, they are at their strongest influence in decades. The same cannot be said for the historically conservative city of Hama, where their influence recently has been strongly challenged by secular opposition activists like Fidaa Al Hawrani, the daughter of Syria’s socialist “godfather” Akram Al Hawrani. Fidaa Hawrani, a doctor, is operating around the clock with ordinary Syrians, offering them free-of-charge medical services, thereby outdoing the Brotherhood when it comes to hands-on popularity and community service.

In other cities like Damascus and Aleppo, one cannot really measure how popular the Brotherhood would be, until Syrians go to the polls. What is clear, however, is that in recent years, political Islam, once attractive only to poor people, has now infiltrated high society and is becoming a magnet for the urban rich. In posh neighborhoods of Damascus, for example, wearing the hijab is astronomically high, so is mosque-going and closed Islamic lessons, given by followers of the prominent Islamic teacher, Munira Al Qubaisi.

The Qubaisis, as they are known in society, operate a very powerful network among the wives, daughters, and mothers of affluent businessmen in Damascus. They single-handedly re-invented the Islamic hijab, for example, a hallmark of their society. Previously in the 1950s and 1960s, the Damascus norm was an Audrey Hepburn-like scarf, adorned more for modesty, rather than religiousness. Now, thanks to the Qubaisis, it comes with dark stockings and a long coat in dark blue, navy blue, or black — depending on how senior a woman is in the Qubaisi society. The Qubaisis control schools, mosques, and entire neighbourhoods, where alcohol, for example, is not served at restaurants, and where hijab-wearing young women drive around in brand new BMWs and Audis. They are rich, socially prominent, and influenced by Islam. 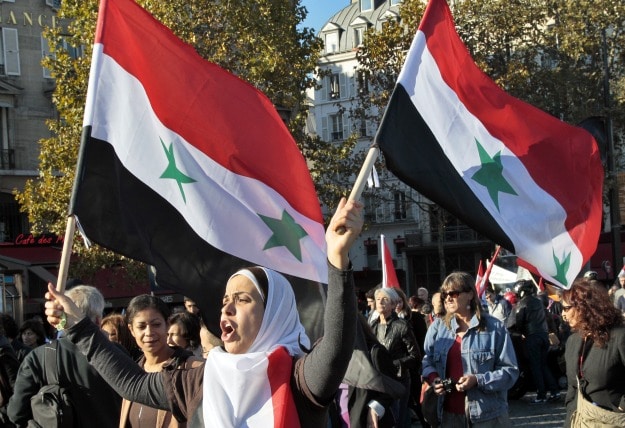 Will affiliates of Islamic groups like the Qubaisis vote for an Islamic party in upcoming parliamentary elections, if they were truly transparent and democratic? Chances are that they would, and so would prominent regime-friendly clerics like the ex-dean of the Faculty of Theology, Said Ramadan Al Bouti, a heavyweight in conservative Damascene society, or even the Grand Mufti himself, Ahmad Hassoun, who commands strong popularity in his native Aleppo. All talk about them being “secular clerics” is pure nonsense, marketed by them during the heyday of the secular era, in order to cuddle up to officials. That is only natural, given that although many would think twice before admitting, all Muslim conservatives are inspired by Brotherhood founder Hassan Al Banna’s slogan, “Islam is the solution.”

Arab nationalism has been tested, and milked, for nearly 50 years. It failed drastically at answering people’s political, economic, and social worries. So has Baathism, which has already started its long march into history. In fact, it is precisely because Baathism failed that people began searching elsewhere for answers — at mosques, for example, in online Islamic forums, and at the theology lessons of people like Saeed Ramadan Al Bouti and Al Qubaisi. And it is precisely because moderate Islamic parties were denied a platform for decades that Al Qaida-inspired fundamentalists hijacked Islam throughout the Arab World.

That argument is logically being challenged by those who believe that although popular, political Islam will never come to power in Syria, for one main reason: demographics.

In Syria, 10 per cent of the population is Christian, and they would never vote for the Brotherhood. Neither would the 15 per cent Alawite and Shiite communities, or the 3 per cent Druze, or 2 per cent “others” (Circassians, Jews, Ismailis). Then come 15 per cent Syrian Kurds and 10 per cent tribes and Bedouins, who although Sunni Muslims, would also never support an Islamic party. That adds up to 55 per cent, topped with no less than 25 per cent of Syria’s 75 per cent Sunni majority, who are seculars or ordinary Syrians simply un-attracted to political Islam.

That sums up to a majority of voters in any parliamentary elections, meaning that the Muslim Brotherhood or its sister groups would not take more than 20-25 per cent of any incoming Chamber. Meaning, in true internationally-monitored parliamentary elections, Islamic-driven parties like the Brotherhood would be unable to rule on their own with no coalition parties, as the case with the Al Nahda Party in Tunisia.

In a democracy, it is their constitutional right, regardless of what the seculars think or say about them. When democracy prevails, the ballots decide who rules. If they fail, they will get ejected, perhaps in another Arab Spring, also through the ballot. No quantum physics here, just pure and plain democracy.

See the original article on the front page of www.mideastviews.com

Sami Moubayed is a university professor, historian, and editor-in-chief of Forward Magazine in Syria.