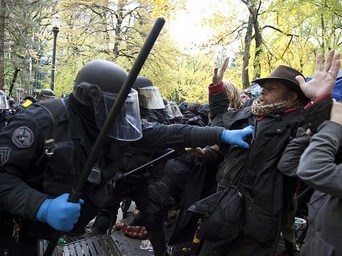 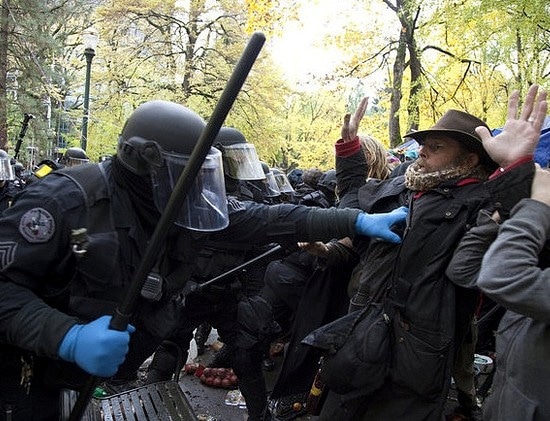 With the passage of the National Defense Authorization Act of 2012 (NDAA), America takes another giant step toward tyranny.It was the White House that wanted this bill applied to U.S. Citizens with minor modifications as America slides towards fascism as well as the Israelification of a militarized Police force:

The Defense Authorization Act was passed by both the U.S. House of Representatives (H.R.1540) and the U.S. Senate (S.1867), and now lacks only the signature of President Obama to become law.  If he signs it, the corporate fascist takeover of America initially exposed and delayed by USMC General Smedley Butler in the 1930s will be complete. Read War is a racket ~

Section 1031 of the NDAA as currently worded authorizes the President to use Military Force to detain indefinitely based on suspicion alone and without trial American citizens on American soil, effectively making the United States a Police State similar to Nazi Germany in the 1930’s and 40’s.  You can read the wording here:

This is in direct conflict with and an overt attempt to override the 4th, 5th and 6th Amendments to the Constitution:

“The right of the people to be secure in their persons, houses, papers, and effects, against unreasonable searches and seizures, shall not be violated, and no Warrants shall issue, but upon probable cause, supported by Oath or affirmation, and particularly describing the place to be searched, and the persons or things to be seized.”

“No person shall be held to answer for a capital, or otherwise infamous crime, unless on a presentment or indictment of a Grand Jury, except in cases arising in the land or naval forces, or in the Militia, when in actual service in time of War or public danger; nor shall any person be subject for the same offense to be twice put in jeopardy of life or limb; nor shall be compelled in any criminal case to be a witness against himself, nor be deprived of life, liberty, or property, without due process of law; nor shall private property be taken for public use, without just compensation.”

“ In all criminal prosecutions, the accused shall enjoy the right to a speedy and public trial, by an impartial jury of the State and district wherein the crime shall have been committed, which district shall have been previously ascertained by law, and to be informed of the nature and cause of the accusation; to be confronted with the witnesses against him; to have compulsory process for obtaining witnesses in his favor, and to have the Assistance of Counsel for his defence.”

While we continue our illegal wars, occupations and economic rape of Iraq and Afghanistan as well as justifing torture and curtailed freedoms as a means to this criminal end ~ I immediately think of Milton Mayer’s classic THEY THOUGHT THEY WERE FREE (The Germans 1933 – 1945) ~ for German exceptionalism in the 1930’s was really not too different, in many ways, than American exceptionalism now and we are very likely headed for the same disastrous fate.

But Then It Was Too Late ~ “What happened here was the gradual habituation of the people, little by little, to being governed by surprise; to receiving decisions deliberated in secret; to believing that the situation was so complicated that the government had to act on information which the people could not understand, or so dangerous that, even if the people could not understand it, it could not be released because of national security. And their sense of identification with Hitler, their trust in him, made it easier to widen this gap and reassured those who would otherwise have worried about it … this separation of government from people, this widening of the gap, took place so gradually and so insensibly, each step disguised (perhaps not even intentionally) as a temporary emergency measure or associated with true patriotic allegiance or with real social purposes. And all the crises and reforms (real reforms, too) so occupied the people that they did not see the slow motion underneath, of the whole process of government growing remoter and remoter.”

Apathy increases with each measured step, as it most certainly has in America, and Mayer knowingly describes the consequences for Germany in the early 1930’s ~ when the burden of self deception becomes so heavy, as it is now, that suddenly you realize that your whole world has changed and you have accepted things (out of fear) that you would never have accepted before the War on Terror.

“In between come all the hundreds of little steps, some of them imperceptible, each of them preparing you not to be shocked by the next. Step C is not so much worse than Step B, and, if you did not make a stand at Step B, why should you at Step C? And so on to Step D ~ and one day, too late, your principles, if you were ever sensible of them, all rush in upon you. The burden of self-deception has grown too heavy, and some minor incident, in my case my little boy, hardly more than a baby, saying ‘Jewish swine,’ collapses it all at once, and you see that everything, everything, has changed and changed completely under your nose. The world you live in ~ your nation, your people ~ are not the world you were born in at all. Now you live in a system which rules without responsibility even to God. The system itself could not have intended this in the beginning, but in order to sustain itself it was compelled to go all the way… You have accepted things you would not have accepted five years ago, a year ago, things that your father, even in Germany, could not have imagined … Suddenly it all comes down, all at once. You see what you are, what you have done, or, more accurately, what you haven’t done (for that was all that was required of most of us: that we do nothing).”  Read article ~

And that is Mayer’s main point ~ it is the spirit that dramatically changes when we accept if not condone the disintegration of our national moral values and civil liberties through illegal wars and occupations as well as our crimes against humanity such as torture, secret renditions as well as intrusive full body scans and pat downs, which will continue to be extended under the pretext of national security and the so called War on Terror.

So here we are in 2011 and the next ominous step ~ the National Defense Authorization Act (S. 1867) will officially confirm that America is a battlefield state ~ with the continued shredding of our constitution and Bill of Rights which started under the Cheney/Bush administration.

Make no mistake about it ~ NDAA confirms Battlefield USA as well as the Israelification of our militarized police force. Max Blumenthal, writing fellow of the Nation Institute, confirms this sad reality that American civilians will increasingly be treated as the terrorist enemy. The Posse Comitatus Act was meant to limit the powers of local governments and law enforcement agencies from using federal military personnel to enforce the laws of the land ~ which poses this question;

How does our government get around that without an act of congress?
It’s simple, turn the ‘domestic’ police force into an Israelified standing army ~
8 minute must see Video:

And Representative and Presidential candidate Ron Paul (who voted against the bill) warns that its passage is the last nail in the coffin of an American Republic ~ that has mistakenly ruled that the sacrifice of civil liberty is essential for freedom.
5 minute must see Video~

Once signed into law by President Barack Obama, this bill will officially make America a police state, wherein United States citizens can be arrested solely on suspicion of wrongdoing and held indefinitely without trial.  Or as the Associated Press put it, the legislation would “deny suspected terrorists, even U.S. citizens seized within the nation’s borders, the right to trial and subject them to indefinite detention.”

“All tyrannies rule through fraud and force, but that once the fraud is exposed they must rely exclusively on force.”  George Orwell