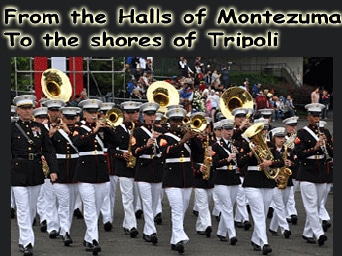 As someone who could be said to “substantially support al-Qaeda, the Taliban, or associated forces,” I am writing to turn myself in under the new NDAA law. Please send a US military brigade, preferably the Marines (semper fi, guys!) to indefinitely detain me. (I’d prefer the Marines because I’m a big fan of Gen. Smedley Butler – and I LOVE Kubrick’s Full Metal Jacket. I mean, let’s face it, compared to the other services, the Marines are seriously cool.)

I suppose you want me to explain what “substantially support” means. Well, I’m wondering about that myself.

If “substantially support” means giving money and weapons, then unfortunately I’m ineligible to be indefinitely detained for life and put up on a military base at the expense of the US taxpayer. Of course, the only reason I haven’t given al-Qaeda and the Taliban any money is that they haven’t asked. If Bin Laden, who died in December 2001, returned from the grave one more time, dragging his seaweed-covered dialysis machine behind him, and showed up on my doorstep with a begging bowl, I would definitely offer some spare change. And if Mullah Omar ever dropped by for a visit, I would offer him three cups of tea and plenty of sympathy. If he needed a few bucks, well, who am I to refuse charity? He could probably use a clean, shiny new glass eye by now.

The comparison is slightly misleading, because I support the Packers wholeheartedly and unreservedly, whereas I do have some areas of disagreement with Bin Laden and the Taliban. I think Bin Laden’s decision to become a lifelong CIA asset was misguided, to say the least. And I think the Taliban have at times behaved inconsiderately to Shi’ites and other non-Pashtuns, women, and gigantic stone statues.

Nonetheless, I think Bin Laden will go down in history as a hero for having the guts to repeatedly insist that he had nothing to do with 9/11. Those statements, which he made throughout September and early October 2001, may have sealed his fate. (Then again, he was an end-stage kidney patient and wouldn’t have lived much longer anyway.)*

Additionally, Osama Bin Laden was by all accounts a good, pious man as well as a terrific public speaker. I unreservedly support at least 95% of what he said in the many excellent speeches and public statements he made throughout his tragically curtailed life. (I’m not just talking through my turban here – I was part of a translation team hired by an anthropologist at UW-Madison to translate a bunch of OBL’s speeches.)

And as far as supporting the Taliban – well, how could anyone NOT support them? These guys are bravely defending their country from a foreign invasion! Just like we would do here if the Chinese invaded us!

The right of people to defend themselves and their land, by any means necessary, against a foreign aggressor, is THE most fundamental human right.

And the Taliban are exercising it brilliantly.

Since I am neither a moron nor a psychopath, I have no choice but to support them.

So please, send those Marines to detain me ASAP.  As they march through my neighborhood (“the battlefield”) to my door, it would be wonderful if you could have them singing “Battle Hymn of the Republic” and “Halls of Montezuma.” I hope you can spare some bugle-players and drummers for the occasion.

And if possible, I would like to request a cell with a big-screen color TV, so I can watch the Packers and the Taliban keep right on kicking ass.