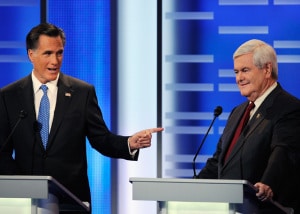 It’s now clear that the Republican frontrunner in the race for the White House is Israeli Prime Minister Netanyahu.

Officially the two Republican frontrunners are Newt “the Palestinians are an invented people” Gingrich and Mitt “Obama has pushed Israel under a bus” Romney.

Both are political whores locked in a competition of their own as well as with President Obama for Zionist lobby organized campaign funds and American Jewish votes. (In a very close election race the latter could determine who becomes president).

The probability is that Romney will emerge as the winner and be the one to take on Obama. So what Romney said in the last debate with the other Republican candidates is of critical importance. He said:

“If I was president I’d get on the ‘phone to Bibi and say ‘Would it help if I said this?’”

In other words, if Romney becomes president, Netanyahu will the one determining American foreign policy for Israel-Palestine.

Because of Obama’s first-term surrender to the Zionist lobby and its stooges in Congress there’s a case for saying that Netanyahu already is, effectively, the president of America so far as policy for Israel-Palestine is concerned.

So is there no prospect of next November’s election producing a president who will be prepared to put America’s own real interests first by confronting the Zionist monster?

If the Republicans get the key to the White House the answer will be “No”, because a first-term Republican president will not want to destroy his prospects for a second term by making an enemy of the Zionist lobby and its fundamentalist (deluded, even mad)) Christian partners. 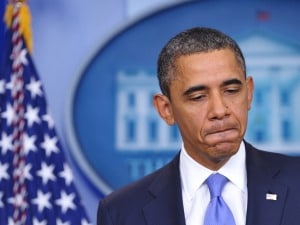 But in my view there is a possibility that a second-term Obama might use the leverage all American presidents have to get a real peace process going, even if that means, as it would, challenging the Zionist lobby’s stooges in Congress to decide whether they are Americans first or not. (Those who are not could be condemned and prosecuted as traitors).

It’s not often that I find myself in agreement with anything written by the New York Times’ op-ed columnist Thomas L. Friedman, but his latest piece under the headline Newt, Mitt, Bibi and Vladimir is a great contribution to the debate about what he calls the “grovelling” to the Zionist lobby of the Republican would-be presidents. (Friedman actually calls it the “Israel lobby”, but as I never tire of saying, that’s not an accurate description of the monster. Israel lobby implies that it speaks for all Israelis and it does not).

Here’s part of what he wrote about the would-be Republican presidents in their last debate.

“Newt Gingrich took the Republican competition to grovel for Jewish votes – by out loving Israel – to a new low by suggesting that the Palestinians are an ‘invented’ people and not a real nation entitled to a state.

“This was supposed to show that Newt loves Israel more than Mitt Romney, who only told the Israeli newspaper Israel Hayom that he would move the U.S. embassy from Tel Aviv to Jerusalem because ‘I don’t seek to take actions independent of what our allies think is best, and if Israel’s leaders thought that a move of that nature would be helpful to their efforts, then that’s something I’ll be inclined to do. … I don’t think America should play the role of the leader of the peace process. Instead, we should stand by our ally.’”

“That’s right. America’s role is to just applaud whatever Israel does, serve as its A.T.M. and shut up. We have no interests of our own. And this guy’s running for president?”

Then Friedman considered the implications of Gingrich’s stated position.

Friedman also had something to say about Netanyahu.

“I sure hope he understands that the standing ovation he got in Congress this year was not for his politics. That ovation was bought and paid for by the Israel lobby.”

And about his own position and American Jews in general

“I’d never claim to speak for American Jews, but I’m certain there are many out there like me, who strongly believe in the right of the Jewish people to a state, who understand that Israel lives in a dangerous neighbourhood yet remains a democracy (for how much longer, I ask?) but who are deeply worried about where Israel is going today. My guess is we’re the minority when it comes to secular American Jews. We still care. Many other Jews are just drifting away.”

If many American Jews really are drifting away from support for Israel right or wrong, that could make taking on and defeating the Zionist lobby a more manageable proposition for a second-term President Obama.

I am in the process of writing a considered piece with the headline The Zionization of American politics and how it could be terminated. It will be ready for publication at the start of the New Year.