Home Military Last Post in Iraq: This Is The Death Knell Of The American... 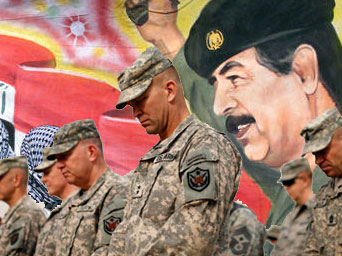 What was intended to be a demonstration of power turned into the most costly boomerang in history, in both blood and treasure

So the Yanks are going home. Apart from the thousands of their servicemen and women whose lifeblood they are leaving in the sands of Iraq, and the tens of thousands too maimed or otherwise damaged to make it back to home and hearth. And minus the trillion-plus of dollars in treasure they have expended on destroying an Arab country (which may have lost a million souls and seen three millions off into exile), fanning the flames of fanaticism, making Iran more powerful, and unleashing a wave of sectarianism throughout the Muslim world.

Nice work, but hardly “Mission Accomplished”, as the melancholy valediction delivered by President Obama at Fort Bragg this week made clear to the discerning.The more he talked about what he once called the “dumb war”, the more obvious it was that his was the task of holding the dipped banner of defeat. And the crew of thick-necked servicemen straight out of central casting roaring their approval at his description of their success could not quite drown out the sound of the Last Post.

This is the death knell of American empire, the end of the brief unipolar world in the ashes of whose hubris the lone bugler now stands playing the retreat. Like Ozymandias, history – which hasn’t ended after all – will invite us to gaze upon its ruined works and tremble. But instead we will rejoice, rejoice. For the Project for the New American Century it will be never glad confident morning again. 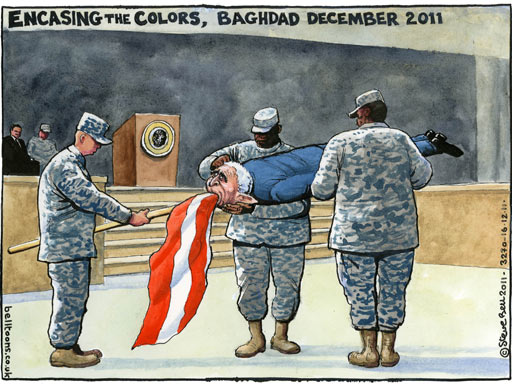 The war that was waged – yes, for oil, and yes, also for Israel – was waged above all to terrify the world (especially China) with American power. It turned into the largest boomerang in history. For what has been demonstrated instead are the limits of near-bankrupt America’s power. Far from being cowed, America’s adversaries – and its enemies – have been emboldened. With shock and awe the empire soon dominated the skies over Iraq to be sure. But they never controlled a single street in the country from the day they invaded until this day of retreat. One street alone – Haifa Street in Baghdad – became the graveyard of scores, maybe hundreds of Americans.

Fortresses like Fallujah entered history alongside Stalingrad as symbols of the unvanquishable power of popular resistance to foreign invasion. Crimes like Abu Ghraib prison – where Iraqis were stripped naked and humiliated, forced to perform indecent acts upon each other and videotaped doing so for the entertainment of their torturers in the barracks afterwards – entered the lexicon of the barbarism of those who invade others, flying the colours of their “civilising” mission. As Chairman Mao once put it: “Sometimes the enemy struggles mightily to lift a huge stone; only to drop it on its own foot.” In an America where a third of the population are living in poverty or terrifyingly near it, and where imperial hubris met its nemesis on Haifa Street, China now knows it has nothing to fear from this paper tiger.

I wrote at the time that the invasion of Iraq would be worse than a crime: it would be the Mother of All Blunders. I told Tony Blair – outside the men’s lavatory in the library corridor of the House of Commons, to be precise – that the fall of Baghdad would be not the beginning of the end, but merely the end of the beginning. And that the Iraqis would fight them, with their teeth if necessary, until they had driven them from their land. I told Blair that there was no al-Qaida in Iraq, but that if he and Bush were to invade there would be thousands of them.

But two things, as George Bush would put it, I “mis-underestimated”. First, that when the tower of lies on which the case for the Iraq war had been constructed was exposed, the credibility of the political systems of the two main liars would collapse under the weight. And second, that the example of the Iraqi resistance would trigger seismic changes in the Arabian landscape from Marrakesh to Bahrain.

Almost nobody in Britain or America any longer believes a word their politicians say. This profound change is not wholly the result of the Iraq war, but it moved into top gear following the war and the militarised mendacity that paved the way to it. In America this malaise has fuelled both the Tea Party phenomenon and the Occupy movement alike, even if the word Iraq seldom crosses their lips. And from the Atlantic Ocean to the Persian Gulf the plates are moving still …