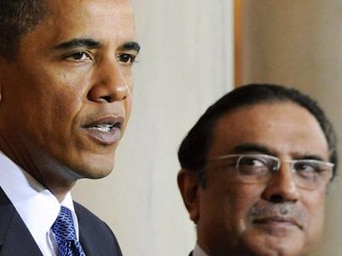 Reportedly, under pressure from the Pentagon, President Obama “hesitated for more than a week” before he phoned Pakistan President Asif Ali Zardari “to provide a qualified apology” for the November 26th killings by U.S. aircraft and artillery of two dozen Pakistani soldiers at a border post near Afghanistan, Robert Dreyfuss reports in The Nation magazine.

There are two U.S. policies on Pakistan: that of the White House and State Department, which prefer to talk, and that of the CIA and Pentagon, which prefer to fight, Dreyfuss writes in the December 26th issue of the American liberal magazine. President Obama’s delayed and weak response may have been a result of that internal tug-of-war.

Dreyfuss raises the possibility that by its sustained attack on the Pakistani troops the U.S. military may have been sending a message to the Pakistans, whose sanctuaries for Afghan insurgents it considers a major obstacle to its progress in the fighting. It is possible, the article said, the Pentagon might be “thinking about escalating the (Afghanistan) war into Pakistan.”

In the wake of the U.S. attack, Pakistan did not attend a Bonn conference hosted by German Chancellor Angela Merkel to work out an accord between Afghanistan, the U.S.-led coalition, Pakistan, and the Taliban, editor Dreyfuss noted.

What’s more, Pakistan also demanded the U.S. quit a drone base there and closed down U.S. supply lines into Afghanistan. Pakistanis are seething not only over the Nov. 26th slaughter but also over the killing of two Pakistanis last January by an armed CIA contractor; the incursion into their country that killed Osama bin Laden last May 1st; and “the barrage of drone attacks on Pakistan’s tribal areas,” Dreyfuss reports.

“Even many U.S. generals know that the war in Afghanistan can’t be won militarily,” Dreyfuss writes, “so the U.S. needs an all-out focus on a settlement, even after the crash-and-burn conference in Bonn.”

A good place to begin, he proposes, would be with a unilateral US/NATO cease-fire. “By halting drone attacks, the United States could provide a face-saving way for Pakistan to enter serious negotiations. A cease-fire would also end the mixed messages sent to the Taliban and their allies and provide a true test of their willingness to come to the table.”

Coaxing Pakistan and the Taliban into talks while getting the region’s powers to underwrite a rebalanced Afghan accord, and very likely a new Constitution is complex indeed, Dreyfuss points out. “With each passing day, it seems the Obama administration isn’t up to the task, and that could mean we will remain bogged down in the (Afghan) quagmire even after 2014,” he writes.

This is unfortunate, he adds, as the American people have turned sharply against the war and want their troops out of Afghanistan. Currently, the timetable for departing calls for 33,000 U.S. troops to quit Afghanistan by next September and withdrawal of nearly all foreign forces by 2014.

Dreyfuss writes that by pursuing “a contradictory policy of warmaking, peace talks and development assistance,” it isn’t all that clear that the Obama administration knows what it’s doing.

Sherwood Ross, who formerly worked for major dailies and wire services, is a public relations consultant for good causes. Reach him at [email protected]. Hear his commentaries on New American Dream internet radio at 8 PM EST the first Thursday of each month.