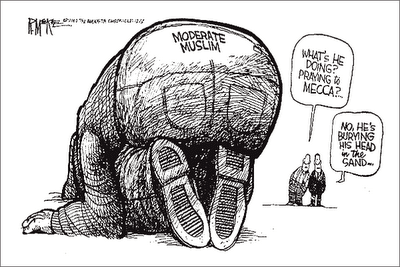 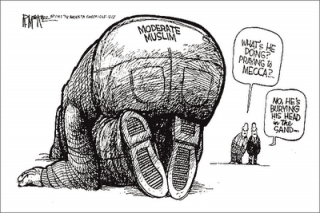 “Moderate” Islamists have become the Empire’s ‘contraceptive of choice’ against any chance the massive Arab peoples’ revolt might give birth to substantive egalitarian social changes and bring those brutal pro- western officials, responsible for so many crimes against humanity, to justice.

The West and their client officials in the military and police have agreed to a kind of “power-sharing’ with the moderate/respectable (read ‘reactionary’) Islamist parties. The Islamists would be responsible for imposing orthodox economic policies and re-establishing ‘order’ (i.e. bolstering the existing one) in partnership with pro-multinational bank economists and pro US-EU generals and security officials. In exchange the Islamists could take certain ministries, appoint their members, finance electoral clientele among the poor and push their ‘moderate’ religious, social and cultural agenda. Basically, the elected Islamists would replace the old corrupt dictatorial regimes in running the state and signing off on more free trade agreements with the EU. Their role would keep the leftists, nationalists and populists out of power and from gaining mass support. Their job would substitute spiritual solace and “inner worth” via Islam in place of redistributing land, income and power from the elite, including the foreign multi-nationals to the peasants, workers, unemployed and exploited low-paid employees.

Petras is right about the empire’s strategy. 9/11 accomplished many things for the Zionists and hard-line imperialists, and one of the most important was to demonize honest Islamic opposition. Today, any Muslim political leader who stands up against the Empire will be slandered as a “terrorist” or “extremist” and very possibly kidnapped, tortured, and/or assassinated.

Yet no real Muslim can do anything BUT stand up against the empire, for several reasons. First, Islam absolutely prohibits any form of lending at interest (usury) – yet the Empire, as John Perkins explains, is built on usury. According to Islamic precepts, usury is worse than the most horrific, unspeakable crimes imaginable. Therefore, every Muslim alive today has a duty to wage jihad, whether of the tongue or the sword, against that imperial abomination, the usurious bankster dictatorship that dominates most of the planet. (Even Robert Fisk, that famous “liberal” Mideast journalist, has recently admitted that the West is not even remotely democratic, but is a thinly-veiled bankster dictatorship.)

Additionally, Islam takes a hard-line stand against injustice, and demands that we work to make the earth as close an approximation to Paradise as possible. While the Christians believe in a “fallen world” and “original sin” and claim “the poor will always be with you,” thus excusing their acceptance of gross injustice (including the separation of religious ideals from social practice), Muslims enforce justice with their hands whenever possible, and with their tongues and hearts when their hands are tied.

And the Qur’an’s notion of justice does not include serious economic inequality. Surat at-Takathur makes it plain that piling up wealth is un-Islamic. The millionaires and billionaires who dominate the allegedly Islamic countries, and do so by cooperating with the bankster usurers, are disgusting hypocrites at best. Whether they should be considered Muslims at all is debatable.

Finally, Islam enshrines the Muslim community as the dominant community whose duty is to rule tolerantly and with righteousness and justice over those communities that are not fully in line with the final Divine revelation. Allowing usurers and other wealth-hoarders to dominate any society, much less a Muslim-majority society, is an obscenity to anyone who takes Islam seriously.

What, then, do the “moderate Muslims” that Petras excoriates think they are doing? Some, of course, are just corrupt, compromised souls. But others are honestly struggling to liberate the Muslim-majority countries and establish Islam. Since the bankster-dominated West will destroy any “terrorists” (i.e. real Muslims), these “moderates” are feigning cooperation with the Empire in order to better establish Islam. The end-game will be the gradual re-unification of the Muslim-majority countries; a move to establish Muslim control over Muslim energy resources; a demand for commodity currency in exchange for oil and gas exports; and the establishment of a non-usury-based currency system backed by those energy and commodity resources. A united Islamic nation (umma) will emerge to dominate the Middle World, the heart of Eurasia and North Africa; and it will likely re-emerge as the planet’s leading civilizational entity…insha’allah.

This likelihood of Islam (and China for that matter) eclipsing a decadent West helped drive a faction of the Western geopolitical elite to stage the false-flag attacks of 9/11, Madrid, Bali, 7/7, Mumbai, and so on. The phony “war on terror” is, as Jesuit professor James Schall says, a pre-emptive “war on an expanding Islam.” These strategists believe that a weak and disunited Islamic world will continue to allow its wealth to be robbed by the Western banksters, which will fuel at least a few more decades of Western (i.e. bankster) dominance.

What’s the best strategy of resistance? Petras champions leftism-nationalism. He seems stuck in the Cold War era when the Empire funded Islamic groups to resist the leftist nationalists who were then in the ascendancy.

Today, Islam is clearly the “social justice nationalism of choice” of the vast majority in the Muslim world. If you don’t believe this, look at the polling data showing that huge majorities want more shariah law, a united Islamic ummah/caliphate, and an Islamic anti-imperial revolution throwing the West and its bankster dictators out of the Muslim-majority lands.

WWD January 14, 2003 | Greene, Joshua Byline: Joshua Greene NEW YORK – The snow and the fur were flying in Aspen over the holidays, when two of Manhattan’s chic furriers – J. Mendel and Dennis Basso – opened freestanding boutiques in the Colorado mountain town.

J. MENDEL It was a Christmas to remember for Gilles Mendel.

Sales at the designer’s new J. Mendel boutique in Aspen outperformed expectations, exceeding $250,000 in the first five days after its launch party Dec. 26., which benefited the Aspen Center for New Medicine.

The space was designed by New York-based architect David Mann of MR Architecture + Decor, with Sophie Brouzes as the designer-in-charge of the project. All three current J. Mendel boutiques and any future stores will be modeled after the Aspen location. In the U.S., J. Mendel has two New York locations – on Madison Avenue and a shop in Bergdorf Goodman. Those locations opened in 1995 and 1999, respectively. The original store on Rue St. Honore in Paris is run by Gilles Mendel’s father and company founder Jacques Mendel. go to web site smith goggles

“I chose Aspen mainly because I’m very in touch with my clients and a large majority of them spend a lot of time in Aspen,” Mendel said. “The whole idea [of the design] was to try to challenge ourselves into making the Mendel version of the future. I can’t wait to have Mendel look like Aspen all over the world.” The store design is a play between the rawness of contemporary materials and the sumptuousness of fur, according to Mann. It features exposed concrete floors with inlaid carpet, freestanding custom-made bronze cases that hold the collection and a marble mosaic floor in the entryway, which is similar to the floor of the window display areas at the Madison Avenue location. In the main area of the floor are two lucite, plastic and aluminum bubble chairs from England that lend a hip feel.

“When I arrived, I was stunned beyond my expectation,” Mendel said. “David Mann excelled at using sophisticated materials and sophistication really relates to our brand. Everything has a modern aspect, but the store is extremely warm.” Besides hearing quite a bit about Aspen from his clients, Mendel was approached by a local retailer to do a trunk show there. After the show’s success, Mendel scouted real estate until the East Hopkins Avenue location opened up.

The boutique offers the full fur collection, the growing rtw line and accessories. Besides the fur coats, Mendel’s goal is to offer a variety of funky items, like an Indian tunic with fur trim, for example.

“I want women to come in and fall in love with things they might not need,” said Mendel, “but because they’re so attractive they have to buy them.” DENNIS BASSO Retail space at the bottom of ski hills is usually filled with Grandoe gloves, Turtle Fur accessories and Smith goggles. But in Aspen, the question du jour among certain apres-ski circles is: Why buy the synthetic stuff when it comes in fur?

That thought was the same question Dennis Basso asked be-fore opening his first boutique, inside the town’s swank hotel, The Little Nell, near the base of Aspen Mountain. go to website smith goggles

The 600-square-foot space will house the fur collection and a range of accessories expected to bring in $2.5 million in its first year. This will add approximately 15 percent to the company’s revenue, according to Basso.

The designer said the choice location inside the hotel was the determining factor for opening a store. The collection will continue to be sold in all Saks Fifth Avenue fur salons.

“We did trunk shows there for six years prior to opening the store,” said Basso, who has also vacation-ed in Aspen for the past 10 years. “And each year, the show grew in terms of revenue.” The interior decor was executed by Kenneth Alpert of New York and features limestone floors and cream, silk-lined drawers. Built-in cabinets, closets and crown moldings are carved of sycamore wood. The store was designed by New York-based architect John Lindel.

While Basso said there are no concrete plans, opening other loc-ations is a possibility.

J. Mendel’s boutique features exposed concrete floors, inlaid carpet and bronze hardware./ Some best-selling styles from the holiday season./ Dennis Basso’s boutique is housed inside The Little Nell hotel at the base of Aspen Mountain. It was designed by architect John Lindel and the decor by Kenneth Alpert.