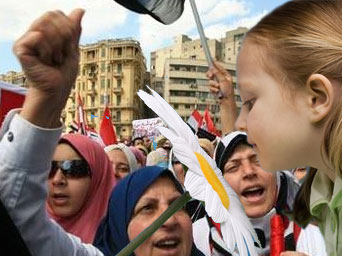 America has great attributes and achievements to export to the Arab world such as advances in medical, science, and information technology, excellent systems of higher education, and a truly generous population that contributes hundreds of billions to social causes.

However, when it comes to the exporting of the American political system and process, I am not so sure.

Given the nature of American politics (Conservatism vs. Liberalism), and its unique democracy driven by money and special interests groups, I am not so sure what the intentions were of US Ambassador to Egypt Anne Patterson when she announced the distribution of $40 million to Egyptian NGOs since the revolution. The question must be raised: is America exporting democracy or mediocrity?

I am not so sure if the people of the Arab Spring want a ‘liberal’ society that allows a hands-off policy towards financial institutions and corporations that fleece people of their investments, retirements, properties, and rights to decent honorable livings. Policies that do not even leave people with a basic social and medical safety net, and that allow multinational corporations to get away with tens of billions of dollars without paying a single dollar in taxes.

In the Arab world, the US has never made any attempt to push for, let alone support, democracy and free elections. Instead, it has always supported ruthless Kleptocracies. The US has continued to overwhelmingly support the claim that Israel is the ‘only democracy in the Middle East’—a claim that has been used to justify lopsided support for the state of Israel, even while it engages in military blunders that wreak havoc, killing tens of thousands of innocents, and oppressing millions.

Over the years, the US has supported ‘Islamist’ movements as a way to preserve checks and balances, to undermine ‘Arab nationalist’ regimes and movements, as were the cases in Gamal Abdel Nasser’s Egypt, in Bashar Assad’s Syria, and in Hassan Turabi’s Sudan. The US has continued to support Israel while it looked the other way as Hamas rose in power to become a highly effective social movement, and a real challenge to a secular PLO. Then, when Hamas won elections through democratic process in 2006, the US responded by isolating Hamas and trampling on the democratic principles it claims to support.

Now, many ‘Arab Nationalists’ and ‘liberal’ intellectuals are accusing Islamist parties in Tunisia, Egypt, Libya, Yemen, and Syria to be following orders from Washington and Israel. They are accusing Islamist parties of going along with an American agenda that supports Israeli justification of their claim as a Jewish State, and one that supports a new Arab world divided along sectarian and religious lines (more on this in a separate essay).

When the ‘Islamists’ were on the verge of winning the first free election in Algeria in 1991, both the US and France intervened to abort the elections resulting in the death of over 100,000 Algerian civilians and the offset of a “civil war” that lasted decade and leaves behind a haunting memory.

The US was caught off guard by the power of the Arab Spring, and has moved fast to ride the wave and influence its outcome in countries like Egypt, Libya, Tunisia, Yemen, and let’s not exclude Syria.

I am not so sure if the Arab world is ready for America’s export of a democracy that produces at best mediocrity—a system of government characterized by congress and legislatures that are owned, bought, and sold by money and special interest groups, forcing members of Congress to spend some 60% of their time seeking re-election funds and corrupting the form of government envisioned by the Founding Fathers.

The US electoral process, especially the presidential race as practiced now, leaves much to be desired. The process fails to reflect the will of the people, and instead is determined by the active participation of the minority in alliance with special interest groups such as AIPAC, Koch Industries and the NRA, who make initial decisions on front-runners, and on who is ‘electable’, as we have seen in the cases of the Iowa caucus and the New Hampshire primary.

America’s democracy and political system suffer from the crippling and undue influence of big money and big business on politics, as we have seen with Koch Industries funding the Tea Party and American Zionists funding Barack Obama.

The influence of money and special interest groups on politics has done irreparable damage on America, corrupting the will of the people. To add insult to injury, the US Supreme Court last year sided with money in its ruling Citizens United v. Federal Election Commission prohibiting governments from censoring political broadcasts that are funded by corporations and unions, thus allowing corporations and unions to raise and contribute unlimited dollars to corrupt democracy.

I am not so sure that those who died to ignite the Arab Spring and the millions who have sustained it want to see corporations and oligarchs in the Arab world sponsoring their candidates, as is the case in the US. I am not so sure they want to see their votes give way to candidates who sway to corporate dollars, and corrupt their hard won rights to freedom and democracy.

I am not so sure if the people of the Arab Spring countries want to undermine the very ideals that many of them have died for, and follow the US model of sound bite elections, with expensive pollsters and media consultants who create misleading if not false political ads.

I am not so sure if the people of the Arab Spring want to see an elected government that continually fails to solve the problems and address the concerns of its people, including, but not limited to, unemployment, poverty, lack of health care, corruption and corporate fraud and an empty treasury.

No, I think it is best for the people of the Arab Spring to learn from the failures of the world’s ‘leading’ democracy, and instead develop their own democracy, one that truly represents the collective will of the people.