Home Economy Tens facts you should know about Washington 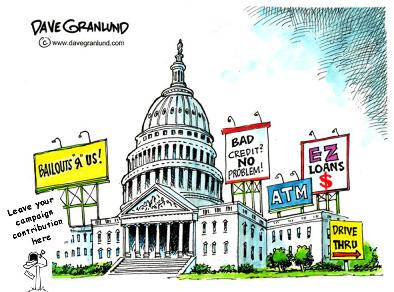 Not a day seems to go by that our federal government doesn’t find some way to get into our knickers under the guise of “doing what’s best for America”. I can only hope there are still enough real Americans, those who truly understand what made this country great, left to throw these self-righteous bimbos out at the next election.

We were bent over at the waist again in this latest round of calamity inside the Beltway….The Budget. It has been over 900 days since we actually had a real budget under which the government is suppose to operate. All we ever get is stop-gap measures, bitter and hated debate, last minute compromises, more garbage shoved down our throats, more debt added to an insurmountable debt that already threatens the quality of life for our children and grandchildren, all because there is no leadership in Washington. This latest catastrophe was caused by Obama with help from the Congress and yet the press makes him out to be a hero.

We have a president who they want us to believe is brilliant beyond words. They say, “well, look, he was a graduate of both Columbia and Harvard, and he’s a Constitutional scholar, and if you don’t think he can walk on water, then you are just a racist”. If he is so brilliant, please tell me how it has come to pass that in the first 19 months of the Obama administration, the federal debt held by the public increased by $2.526 trillion, which is more than the cumulative total of the national debt held by the public that was amassed by all U.S. presidents from George Washington through Ronald Reagan? Is this an example of leadership? Is this an example of brilliance? We cannot run our household like this, yet we let this happen in government.

My friends, we are taking our eyes off the ball. We have a Congress that doesn’t have the huevos to vote on a federal budget; a president who continues to try to implement European economic strategies (that Big Government is the solution), when such Keynesian policies have a track record usually ending in total failure (Russia, Cuba, Greece, Italy, Portugal, etc), and along the way depriving the individual of the freedom to be successful with 48% of the population in utter denial that anything is wrong.

Even when the Democrats controlled both houses of Congress and the Presidency, they couldn’t come up with a budget choosing instead to run rampant with the nation’s credit card. In three years it has been a series of military excursions funded by the seat of our pants, and last-minute budget resolutions to continue funding the government by threatening the old, and the young, with loss of police and fire protection, Social Security, Medical, Medicaid, Veterans benefits unemployment insurance, postal service, and everything provided by government.

Folks, those in government do not deserve re-election and have not earned the money they are paid. The whole city of Washington DC is Sodom and Gomorrah revisited, populated with whores, pimps, and derelicts.

There will always be the “Blame Bush” crowd; those that say Obama inherited the current mess in Washington, that it’s those rotten Republicans who are keeping the President from saving America; and that we just haven’t had enough government spending to “turn the tide” to prosperity. Well for those, like ostriches with their heads in the sand (our planted somewhere else that the sun doesn’t shine), here’s a few facts for you…

1) Many leading Democrats in Washington these days like to point to the fact that the federal budget was balanced for part of the time that President Bill Clinton was in office. What they do not mention is that those balanced budgets occurred only when Republicans controlled both houses of Congress.

2) Historical data published by the Office of Management and Budget in the Obama White House, no Congress in which the Democrats controlled both the House and Senate has balanced the federal budget since fiscal 1969–more than 40 years ago.

3) Eisenhower was the last Republican President to preside over a balanced budget. In short, neither party is to be held harmless, and I contend it is the system of self-enrichment that causes the Government to spend like drunken sailors (no intention to denigrate our navy here).

4) The current financial catastrophe, began occurring in the Clinton years, exacerbated during the Bush years, and was dumped at the doorstep of Obama. One cannot directly blame any of these Presidents for the problem other than it happened on their watches. The blame lies directly of those overpaid, self-indulgent legislators in Congress, headed by Barney Frank, Chris Dodd, Pelosi, John Kerry, Harry Reid, Spencer Baucus, Roy Blunt, then Senator Obama, and others who received $4.8million in campaign donations from Fannie Mae, Freddie Mac and their employees. The top five recipients of money were:

5) Twenty years before the House of Cards fell in, believe it or not, there were some in Congress who saw what was happening and tried to call it to the public’s attention, but everyone was getting rich by the rising prices of homes and everyone looked the other way. The strategy of purchasing silence by stuffing campaign coffers full of money by Fannie and Freddie worked. They retained the support of most in Congress, particularly Democrats, and they were allowed to continue unrestrained. Rep. Barney Frank (D., Mass) Fannie and Freddie’s chief supporter in Congress, for example, then chair of the House Financial Services Committee, openly described the “arrangement” with the GSEs (government sponsored enterprises) at a committee hearing on reform in 2003: “Fannie Mae and Freddie Mac have played a very useful role in helping to make housing more affordable… your congressional support is secure”.

6) Millions of Americans have been caught up in the nation’s housing crisis, which will take decades to straighten out. Nearly all were deeply affected when the housing bubble burst. Not so for those in power. Franklin Raines, the Democratic insider who ran Fannie Mae between 1999 and 2004, isn’t one of them. While Rome was burning Raines paid $4.9 million for “a three-bedroom, seven-bath penthouse condominium” in Washington’s Ritz-Carlton Residences. Regulators alleged an accounting fraud at Washington-based Fannie Mae that included manipulations to reach quarterly earnings targets so that Raines, Howard, Spencer and other company executives could pocket hundreds of millions in bonuses from 1998 to 2004. Raines’ total compensation from 1998 through 2004 was $91.1 million, including some $52.6 million in bonuses. Following this debacle, Raines was fined $31 million…a mere slap on the wrist and no jail time.

7) As to how Mr. Obama fits into the picture…  In light of the collapse of Fannie and Freddie, both Senator John McCain and Barack Obama now criticize the risk-tolerant regulatory regime that produced the current crisis. But Sen. McCain’s criticisms are at least credible, since he has been pointing to systemic risks in the mortgage market and trying to do something about them for years. In contrast, Sen. Obama’s conversion as a financial reformer marks a reversal from his actions in previous years when he did nothing to stop the corruption. He, like so many others, just took the brides of Fannie Mae and Freddie Mac (campaign contributions) and threw in his support to maintain the statue quo…and now he wants everyone to believe he’s looking out for us…Is this what they call “a crock of sh*t”?

8) The first head of Mr. Obama’s vice-presidential search committee, Jim Johnson, a former chairman of Fannie Mae, was the one who announced Fannie’s original affordable-housing program in 1991 — just as Congress was taking up the first GSE regulatory legislation. So this Messiah to end all Messiahs; our deliverance from a corrupt and secretive government; the one who vowed to clean-up Washington along with Pelosi’s pledge to “drain the cesspool”, are just as bad, if not worse, than previous administrations, though they might have been inept, were not this blatantly corrupt.

9) OK, so I am upset with Obama and politics as usual. Maybe everyone I used for my research is nuts. How does anyone explain the crony love affair Obama has with Big Business and his most stupid move to date of selecting General Electric CEO, Jeffrey Immelt to head his “Job Counsel”. Under Immelt, GE has shipped tens of thousands of good jobs out of the United States. If the very people Obama has entrusted with solving the unemployment crisis are shipping jobs out of the country, what hope is there that things are going to turn around any time soon? Oh, and by the way…GE paid only 5% in corporate income tax when we have all been told the corporate tax rate was 35%. Talk about sleaze; makes you want to take a shower!

10) The last record we need to straighten out is the unemployment rate said to have dropped to 8.6%…right. We could make the same kind of misleading fact that everyone in America is healthy and that nobody is overweight…all we have to do is exterminate everyone who is old, sick, and fat, and we can easily claim 100% of the population is in perfect health. When someone stops looking for work, reaches the end of unemployment insurance, or takes a part-time seasonal job, they are no longer considered “unemployed”. The unemployment in the US, as estimated in real numbers by numerous reliable sources (Federal Reserve as reported to Breitbart) is greater than 16%.

As a veteran and understanding the sacrifice millions have made in defense of this great country, are we not derelict in our duty as voters and our pledge to defend the nation against all enemies both foreign and domestic, to allow this calamity to continue? It has been said that in a democracy we get the kind of government we deserve, but I for one never believed we would fall for such depravity. I think Sir Winston Churchill, one of the most astute political figures of all time, hit the nail right on the head…

Monday I will share a formula for castrating the political beast we call “politicians”.