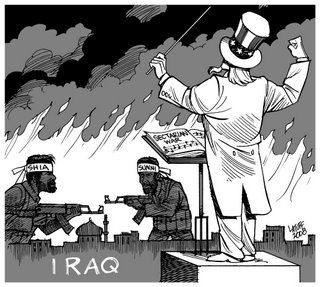 “Who’s going to object to referring to the Sunni insurgency in post-war Iraq as yet another attack by al-Qaeda?”

While surfing the morning news, Most people would indifferently glance at this headline “Al-Qaida in Iraq says it was behind Baghdad blasts” and fail to grasp the real story behind it. But then, how could they not when the story is presented to them with such a deceiving title to begin with.

Now that the boys are out of the Iraqi swamp, a smart move in Obama’s electoral campaign,why should any American care what happens in that remote area on planet earth called Iraq- a place most Americans failed to locate on the map in a National geographic survey in 2006.

The American military and the so called coalition forces raided Iraq in 2003 in a search for the alleged presence of military training camps for the so called al-Qaeda and hidden depots packed with tons of weapons of mass destruction(WMD).

Neither was found … Nevertheless the American & coalition troops dragged their feet before they finally left Iraq.

And as Obama was saying to his returning soldiers “welcome home .. welcome home” his inner circle at the white house and Pentagon knew for a fact that this diplomatic move is more of a strategic repositioning of troops in the region ( in Kuwait, Qatar and Bahrain) than a full withdrawal, and that Iraq is bound to stay under the American strategic and military control till at least 2020. That if Iraq managed to linger as one nation for that long.

Last week and as Leon Panetta, the American defense secretary was declaring that the American war on Iraq had finally come to an end and that the boys would be home for Christmas he somehow forgot to say to the Iraqis “Sorry fellows for all the mess and the killing we caused. Hope you hold no hard feelings for us and that you’d understand that we didn’t mean to bring about that much damage and chaos … we were only fooled by the Israelis and blindly acted on their misleading intelligence … and yes, maybe we dumped too much Depleted Uranium on your heads .. and maybe the black water guys overdid it, any way this game is over now .. and we will leave you fellows to sort this old grudge between the Sunnis and Shiites on your own.”

While the civil war now raging between Shiite and Sunni in Iraq is sometimes cast as an extension of an age-old religious struggle, today’s conflict is about something slightly more political.

But that is not how the Zionist- controlled mainstream media define and report this struggle. Whenever covering the deadly confrontations between the two sects; the Shiites are referred to as Iran-backed sect and the Sunni sect is conveniently referred to as al-Qaeda front group.

Despite the fact that the American/coalition troops couldn’t find any WMD nor any link between Sadam’s regime and the so called al-Qaeda simply because the whole story of al Qaeda is nothing but a CIA/Mossad masterpiece operation.

Nevertheless, it won’t hurt anyone especially that Osama Bin Laden is now lying in the bottom of some sea serving as fish food, to keep this myth alive. Who’s going to object to referring to the Sunni insurgency in post-war Iraq as yet another attack by al-Qaeda?

The Bush/Obama administration used it so did Gaddafi in Libya, Saleh in Yemen and now Bashaar el-Assad in Syria … so why not keep this myth alive, it will surely come in handy, in case Israel decided it is time they fooled the Americans once again into yet another and uglier war in Iran.

Al-Qaida in Iraq says it was behind Baghdad blasts

BAGHDAD (AP) — An al-Qaida front group in Iraq has claimed responsibility for the wave of attacks that ripped through markets, cafes and government buildings in Baghdad on a single day last week, killing 69 people and raising new worries about the country’s path.

The coordinated attacks struck a dozen mostly Shiite neighborhoods on Thursday in the first major bloodshed since U.S. troops completed a full withdrawal this month after nearly nine years of war. They also coincided with a government crisis that has again strained ties between Iraq’s Sunnis and Shiites to the breaking point, tearing at the same fault line that nearly pushed Iraq into all-out civil war several years ago.

The claim of responsibility made no mention of the U.S. withdrawal. Instead, it focused its rage on the country’s Shiite-dominated leadership, which Sunni insurgents have battled since it came to power as a result of the U.S.-led invasion that toppled Saddam Hussein in 2003.

“The series of special invasions (was) launched … to support the weak Sunnis in the prisons of the apostates and to retaliate for the captives who were executed,” said the statement in the name of the Islamic State of Iraq.