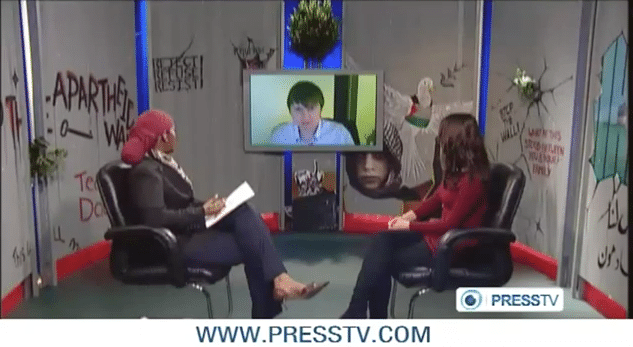 I appeared on this week’s edition of the Press TV show Remember Palestine. I used the platform that Press TV graciously provided me with to argue that those of us who want to bring an end to the Israel-Palestine conflict ought to capitalize on the evidence of Israeli involvement in 9/11 rather than neglect the subject because it is deemed by some to be “controversial”.

I think most would agree that without the U.S. government altering its stance vis-à-vis Israel that there is little hope for justice in Palestine. The only conceivable way of the U.S. undertaking a volte-face vis-à-vis Israel is if a sufficient proportion of the citizens of the U.S. become conscious of a) the extent to which Israel and its affluent supporters are distorting U.S. Middle East policy as well as b) the extent to which such pro-Israel forces lack any respect for the U.S. taxpayer.

Unfortunately, Arabs and Muslims have been dehumanized by opportunist journalists and careerist academicians who have jumped on the anti-Islam, pro-Israel bandwagon, post 9/11, which has resulted in a preponderance of U.S. citizens lacking any empathy with the beleaguered Palestinians and the other benighted inhabitants of the region.

I argued on Remember Palestine that the abundant evidence linking Israel to 9/11 provides the pro-Palestinian movement with a unique opportunity to foster such empathy among the U.S. body politic. Those in the pro-Palestinian movement, I argue, must stop shying away from the evidence linking Israel to 9/11 and must actively educate the people of the U.S. and other nations that nearly 3000 U.S. citizens were slain on 9/11 with the complicity of the Israeli government.

I suspect that many U.S. citizens would be unmoved if you informed them that 3000 or even 3 million Arabs and Muslims had been killed by Israel. Indeed Dr. Gideon Polya has deduced that the (largely Israeli concocted) 9/11 wars have resulted in the deaths of as many as 2.3 million Iraqis and 4.5 million Afghans and, yet, the anti-Islamic 9/11 wars continue unabated. The most recent phase of the 9/11 wars includes an illegal incursion into Libya and increased meddling in Syria. The main goal from the perspective of the Israeli government has been to foment sectarianism and civil war in the Middle East so those who dwell in the Middle East are fighting each other rather than the Israeli hegemon.

I am of the view that the pro-Palestinian movement ought to emphasize the fact that 3000 mostly Caucasian and non-Muslim U.S. citizens were killed on 9/11 with the complicity of the Israeli government. It’s not that U.S. or Caucasian blood should be deemed more valuable than Palestinian or Arab blood. The Western media have created an intellectual environment where, in the eyes of many U.S. citizens, Palestinian and Arab blood is valueless. Thus, those of us who are serious about promoting peace in the region ought to emphasize crimes of the Israeli government that will have the most efficacy in mobilizing support for the Palestinians.

It is likely that if enough U.S. citizens became aware of the Israeli involvement in 9/11 that they would begin to voice criticism of the U.S.-Israeli “special relationship.” Thus, this is the tack I am taking in most of my media appearances. I encourage others to do so.

I very much hope that those academicians who focus on the Israel-Palestine conflict such as Norman Finkelstein, Stephen Walt, John Mearsheimer, Noam  Chomsky, Ali Abunimah, Ilan Pappé and others will likewise acknowledge the evidence implicating Israel in 9/11 as this evidence could be decisive in ending the Israel-Palestine impasse. [For more on Chomsky’s 9/11 denialism, which was presaged by his dismissal of conspiracy in the death of JFK, see: The Assassination of CPL Pat Tillman USA]

Such scholars have since 9/11 presupposed the veracity of the official story of 9/11 and in doing so have based much of their scholarship on a false-premise, namely that bin-Laden and al-Qaeda were responsible for 9/11, when this theory, which is a conspiracy theory, has been debunked by numerous credible scholars including David Ray Griffin who has written ten books addressing very specific claims made by adherents to the official story of 9/11 demonstrating them to be inconsistent with the available evidence and in many cases even with the laws of physics and of aerodynamics. Indeed many ears should have pricked up when, in the immediate hours following 9/11, the Popular Front for the Liberation of Palestine was blamed and footage of Palestinians dancing, albeit from 1993, was projected to the U.S. public.

I think history will not absolve those in the so called “pro-Palestinian” movement who have helped to suppress evidence implicating Israel in 9/11. Imagine if the Afrikaners, during the 1980s, out of desperation had killed 3000 Americans and blamed this act of terrorism on the ANC so as to make its enemies (in this case black Africans) the perceived enemy of the American people thus justifying the continuance of the U.S.-South African “special relationship”. Would the anti-apartheid movement not have been feckless, indeed insane, if they had failed to capitalize on this blunder of the pro-apartheid forces?

It does a disservice to the Palestinians and non-Palestinian victims of Israeli foreign policy to try to divorce the Palestine Question from the broader manifestations of the locus of power which James Petras has referred to as the “Zionist Power Configuration” (ZPC). This ZPC operates at both a global and local level as was indicated on 9/11. As Naomi Klein accurately wrote in the Guardian “[the] Likudisation of the world [is] the real legacy of 9/11.”

For those of us living in Western countries, especially in North America, the most efficient way for us to engender empathy with the Palestinians in the eyes of uninformed Westerners, especially U.S. citizens, is for us to illuminate Israel’s involvement in the massacre of U.S. citizens on 9/11. A failure to capitalize on Israel’s most egregious crimes and blunders is tantamount to complicity in the oppression of the Palestinians and the other victims of Israeli foreign policy.

In my commentary for Remember Palestine I cited Peter Oborne’s exemplary documentary “Inside Britain’s Israel Lobby” which demonstrated that the British parliament is influenced heavily by the British franchise of the global Israel Lobby: