Home Government MADE IN USA Messages and Obama’s Spine 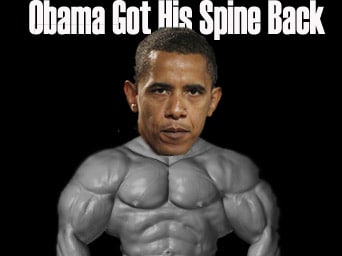 A dysfunctional and unpopular Congress, who would not compromise and pass any major legislation due to petty partisan hostility toward his agenda, provided the starch President Obama needed in his spine.

Referring to Obama’s recent victory on a short-term extension of the payroll tax cut and rising poll numbers, Joshua R. Earnest, the president’s deputy press secretary commented the President “intends to hammer the theme of economic justice for ordinary Americans rather than continue his legislative battles with Congressional Republicans. In terms of the president’s relationship with Congress in 2012, the president is no longer tied to Washington, D.C.” [1]

This American citizen of conscience and no-party affiliation candidate for US House of Representatives who voted for and has been gravely disappointed in President Obama is on the record supporting the President’s initiatives to revive the economy in particular the hiring of returning veterans and in helping students pay back their college loans.

It has been reported that 90% of Americans live paycheck to paycheck and are only two paychecks away from being homeless. Currently there are 3,000 homeless students in my Lake County community and for the last six months I have been spending Saturday morning with other volunteers who provide food, clothing, contact information for community resources and pray for the growing numbers in the community who have lost their jobs and homes or are at risk of homelessness due to the economy.

On New Year’s Eve morning I met a young professional couple who a year and a half ago had been bringing home over $100 Grand a year. The husband, a veteran told me his unemployment benefits will run out next week and his wife’s will in April. Read More

I call it capitalism without conscience and Obama says it “breathtaking greed” that contributed to the country’s economic troubles and that this was a “make-or-break moment for the middle class.”

In solidarity with that, I offer my first four one-minute MADE IN USA Messages as a Citizen of CONSCIENCE for House of Representatives 2012