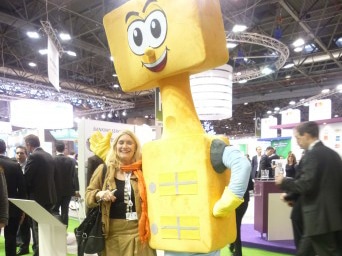 CARTES & IDentification , organized by a company Comexposium, was a large event having approximately 20,000 attendees and exhibitors. It was held at the large exhibition center in the north of Paris at Villepinte.

Now for the first time Comexposium will be having the event Cartes in North America in Las Vegas from March 5-7, 2012 It will focus on trends and technologies to facilitate business in the huge North American market .

Comexposium, the producers of both the European and North American events launched their promotion with a speech in Paris at the press conference. When I registered for the Paris event, Cartes& IDentification, the press attache, Bérengère Bonnet told me that I must attend.

At the press conference, we saw a video with some of the participants from companies in US telling us about their excitement not only about attending the event but also about being in Las Vegas. Daniel Chatelain , managing director of The Bay Pay Forum, gave a keynote presentation entitled “ Payment Trends 2011 from the Silicon Valley.” The event will be launched with a networking cocktail the evening of March 4.

North America (USA and Canada) according to The Nilson Report generates more than 39% of debit and credit card spending worldwide. Near Field Communications known as NFC is a new market for smart technologies such as payments. NFC authorizes payments using mobile telephones.

The user just taps their smartphone at a PCS terminal. MasterCard uses this and requires the user then to tap their PIN code (a four digit code for the credit card) on their mobile telephone.

Now there are more than 340,000 Master Card PayPass merchants worldwide. In October, at CITEX in Dubai Oberthur Technologies said that will have a strategic partnership to launch NFC to make payments with a Blackberry 9900 in UAE. No need for cash – just a mobile telephone and your secret PIN code ! CITEX is one of the largest and important ICT events.

North America is far behind Europe in card technology. Here in Europe we have silver or gold colored chips which store important data in the debit and credit cards which are Visa or Mastercard. Amex does not do this. It is called EMV Europe Master Card Visa technology.

Now we have V PAY debit card system developed by VISA. It features the new international safety standards some banks across Europe are using. With the advanced PIN technology it is impossible for criminals to make counterfeit cards. Cards have the logo V PAY on them. These cards work only in Europe.

CARTES in North America will be held at the magnificent Mirage Hotel. There will be 100 presenters and 100 exhibitors. It will be a good place to learn about mobile payment applications and new identification and securities access. It is interesting to note that 85% of all band cards issued in USA come from Bank of America, Citibank, Chase and Wells Fargo.

I enjoyed visiting the exhibits. First I visited IRIS and met Raudhah Aminudin who told me that IRIS’ invention was utilized by the Malaysian Immigration Department for the first e-passport. Now they make digital security products.They design,develop, manufacture and deliver e- passport inlay, biometric and smart readers, security products for national IDs, drivers licenses and other products. They have a wide range of products and also software solutions for management services and consultants. IRIS’ e- credential solutions are used internationally. They listen to customers’ needs and tailor programs to meet these needs.

Nearby I saw the Watchdata booth. Even friendships can be made at Cartes & IDentification. From the moment Watch Data put his arm around me, I knew we would be friends. He is gorgeous – all yellow – his head being an antenna and his body a smartphone! I asked someone to take our photo and Watch Data was very happy. Watchdata, in business for 11 years had Watchdata walk around to attract visitors to their booth. They make transportation microprocessor smart card technology as opposed to magnetic and memory chip. Using TimeCos Fly contactless microprocessor smart card technology the Land Transport Authority of Singapore developed TimeCos CEPAS . They are the first company to develop and comply with Singapore Standard Contactless ePurse Application known as CEPAS. Consumers can use their cards for buses, subway, parking payments, lotteries, convenience stores, vending machines, restaurants – all without using any other credit card because everything is in one card. Time COS SCOSTA is a card used for India for drivers’ licenses, certification of vehicle registration and Indian Health Insurance Cards for to provide protection for those below the poverty line (BPL) from health care financial liabilities. TimeCOS Calypso is another system used by several cities in Europe for transportation services.

Izabela Szatkowska-Macak from Poland was very friendly.She works for Austriacard as a sales manager. She told me that service is the key. Her booth provided refreshments including good Austrian wine for clients.

Marcus Venmann senior director of marketing at Infineon told me about their company. They use multiple services for making chips for bank cards . They tailor security systems. New passports will have a chip and antenna inside the passport. These passports can be read electronically at passport control. They introduced security into banking cards.

It was fascinating to learn about cashless payments that can be made from smartphones. I even saw an exhibit that showed how a check could be scanned and then deposited into a bank account from the smartphone! The use transportation cards that can also be used for payments is great. Here in Paris we use subway/bus passes called Navigo. I saw that a company called Inside Secure was a 2011 Winner of a Sesame Award for their

At a cocktail reception, I met John Milhoan from Pittsburgh Embossing Services. He told me that he works with a US Veteran. I went to see him at his booth. PES provides ideas and products for plastic card embossing and thermal printing. They buy and sell used embossing and thermal equipment for plastic cards. They also provide consulting such as secure card certification and technical services such as technician training.

During his university studies, he was in ROTC.at the U. of Texas . When he enlisted, he would have gone to the war but he was assigned to in-processing for the Army . He inspected basic training stations. The part of his service he liked most was when he flew courier duty because he saw many cities worldwide. He said servicemen received special attention from airlines because the army purchased many tickets every day.

His father was a civilian contractor in Vietnam. He was with the Merchant Marines in World War II though he wanted to be in the Marines. His father spent 6 ½ years in Viet Nam.

Turkey was the guest of honor. This country has the largest ATM market in Europe and was the first one to use a first commercial roll-out of a NFC mobile payment solution

Along with Poland, Turkey is a front-runner for contactless card growth, with almost 100% growth in 2010. Already close to 30,000 retailers offer contactless technology and banks such as Garanti Payment System have a total of 1 million cards in circulation.
Turkish consumers will be the first in the world to have the opportunity to make their mobile phones compatible with NFC technology. The solution, supported by MasterCard PayPass technology, will be introduced in Turkey with Avea and Garanti Bank. It is designed to help customers extend the range of devices for PayPass enabled transactions to their mobile phone through the purchase of the specially adapted SIM.

I enjoyed going to CARTES & IDentification. The staff of Comexposium had a good press lounge for journalists and provided refreshments and information about the show. They and the exhibitors made me feel very welcome . It was a good learning experience as well as a good networking opportunity.