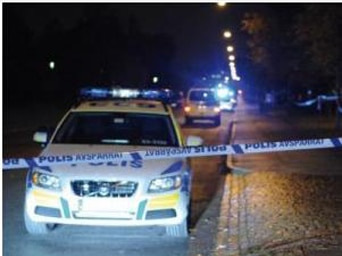 How Soon We Forget

In the course of just six weeks, five people have been shot dead in execution-style murders in Malmo, Sweden’s third largest city.  Each seems to be an act of shooting carefully pre-selected targets, for which the police have so far produced no explanation beyond a vague suggestion of “gangland violence.”

This explanation is scarcely convincing. Policemen are usually aware of the activities of criminals on their respective manors.

Gun laws are tight in Sweden. That being so, the examination of spent cartridges, bullet wounds and so forth should point very quickly to the type of weapon used. Yet we hear nothing concerning this important ballistic evidence.

It appears that in Malmo, the forces of law and order are sorely lacking in the expertise of forensic scientific services.

The question that I ask myself in these circumstances is: are witnessing another episode in the chain reaction of often mysterious and reputedly aimless gun atrocities committed in Europe over the past decade?

The Malmo attacks follow closely on those committed in Liege, Belgium, on December 13, 2011. There an alleged lone gunman killed five shoppers at a Christmas market, and injured another 125, before killing himself.

On the same day, an alleged far right militant shot two Senegalese street vendors in Italy’s artistic capital, Florence. The police say that the suspect made his last stand in an underground car park, where they shot him dead.

On July 22, 2011, an allegedly lone gunman, Anders Behring Breivik, was blamed and eventually convicted for a shooting rampage at a holiday camping island close to Oslo, in which 69 died.

Only hours before it is claimed that he planted a huge bomb in Oslo’s central government district which killed another eight.

Reaching back to September 27, 2001, we discover a parade of shooting atrocities across Europe that are always connected to a single confused individual.

In every case bar one, the gunman himself also dies. That one exception is Anders Breivik. He is still alive.

After weeks confined in a government medical center, he has been pronounced insane.

The roll call reads as follows:

September 27, 2001: a gunman bursts into a meeting of local councilors in the Swiss city of Zug, kills fourteen and then himself.

March 27, 2002: Nanterre, France: eight local councilors die and another nineteen are injured in a similar shooting rampage. The gunman commits suicide while in police custody.

April 26, 2002: A student kills sixteen staff and two pupils at a school in Erfurt, Germany. Following the pattern, he then kills himself.

November 7, 2007: Another school atrocity, in the Finnish town of Tuusula, thirty miles from the capital Helsinki. An 18-year-old kills eight people in an apparently motiveless attack, before executing himself.

September 23, 2008: Another school attack and again in Finland. The setting is the small town of Kauhajok. Eleven die at the hands of a 22-year-old gunman, who wounds himself in the head, then dies in custody.

March 11, 2009: Nine pupils, three teachers and three passers-by die in a shooting at a high school at Winnenden, in south west Germany. An apparently frustrated student then kills himself.

April 9, 2009: The Netherlands: a lone gunman runs amok in a shopping mall in the small town of Alphen aan den Rijn, about thirty miles from Amsterdam. He kills six shoppers – and then himself.

June 2, 2010: twelve die in another apparently motiveless shooting in and around the small town of Whitehaven in the English Lake District. The gunman, a 52-year-old taxi driver, pursues the established pattern and turns his gun on himself.

Now, in order to explore further elements of the pattern, we turn the clock back to Belgium in the mid-1980s. The years between 1982 and 1985 are well remembered by Belgians as those of the “Brabant Massacres.”

Masking their acts as robberies, a gang calling themselves the “Killers of Brabant,” taken from the bustling Flemish city where the murders occurred, indulged in a campaign of wanton violence.

They attacked shops, bars and supermarkets, in the course of which twenty-eight died another 20 were seriously injured in a rain of seemingly purposeless fire. The victims included shoppers queuing at supermarket tills or quietly packing their groceries in car parks.

All the killers remain at large, but these interesting facts have come to light: In 2006, the weapons and ammunition used in the attacks were traced to an allegedly defunct branch of the Belgian Gladio unit code-named SDRA8.

This unit was the “Special Intervention Squadron” – the one known within the Gladio command structure as the “Diana Organization.” That code name stood, in turn, for a group of experts in the arts of selected assassination.

It is now well known that that Belgium’s Gladio structures enjoyed close links to neo-Nazi groups and the powerful Belgian Mafia.

The acts were not as senseless as they appear to the surface. Nor were they conducted for gain. After one raid, a sack stuffed with money was found tossed in a stream.

Their aim was political: to create an atmosphere of manufactured or synthetic violence, designed to unsettle Belgians and instill a sense of fear of latent dangers lurking in their midst.

The official parliamentary inquiry that reported in 1990 concluded that “the gang were all members or former members of the security forces – extreme right wingers who enjoyed high level protection and were preparing a right wing coup.”

In this one statement we find a potentially interesting clue to the shootings across Europe over the past decade.

Clearly, there are differences in the record, which suggest a wariness of advancing the case that “one size fits all.” Yet the sum of similarities is not to easily dismissed, either.

In every case there is an apparently mentally confused figure that so often stands out in these affairs as the well cultivated patsy or stooge. Think Lee Harvey Oswald and Jack Ruby in the US.

Or in Europe, Christer Pettersson, who is locked up in a Swedish mental institution for murder of Swedish premier Olof Palme in February 1986.

A tragic sequel, again in Sweden, witnessed the murder of the Swedish foreign minister Anna Lindh in a Stockholm department store on September 11, 2003.

Another drifter, a Swedish-born Serb called Mijailo Milalovic was convicted after a sham trial and he too is now in indefinite detention in a secure institution, exactly like Breivik in Norway.

It cannot be stated too often that Sweden is the only European state where a serving prime minister has been assassinated since the end of WWII.

His death, and subsequently that of his protégé, Anna Lindh, has played a significant role in replacing the traditional easy-going image of Sweden with the far darker one portrayed in the bleak crime novels of the late Stieg Larssen.

We may usefully bear that in mind when considering recent events in Malmo.

[Editor’s note: Cottrell’s upcoming book covers this Strategy of Tension in Europe and some of the instances he mentions briefly in this article in painstaking detail. If you want a better understanding of how this modern trend is emerging and its providence, I highly recommend you pick it up as soon as possible.]

Richard Cottrell is a writer, journalist and former European MP (Conservative). His new book Gladio: NATO’s Dagger At The Heart Of Europe is coming in January of 2012 from Progressive Press.

THIS ELECTRONIC VERSION MAY DIFFER SLIGHTLY FROM PRINTED VERSIONRegarding …

Post-Tribune (IN) September 10, 2007 THIS ELECTRONIC VERSION MAY DIFFER SLIGHTLY FROM PRINTED VERSION Why is it that Miller pays the highest and most unfair taxes around, yet our roads are the most overdue for paving? Such a beautiful beachfront community, full of potholes and horrible roadways. Just try to drive around Marquette Park, County Line Road, Oak Avenue or Locust Avenue without hitting the crumbles. go to web site defamation of character

Why doesn’t Merrillville spray for mosquitoes? You can’t walk out your door in the Bon-Aire subdivision without getting attacked by at least half a dozen mosquitoes.

All you people who panic when the power goes out are way too soft. People did without electricity until about 100 years ago. A few days won’t kill you.

Thank you to the Merrillville policeman for directing traffic at 68th Avenue and Broadway each morning. This helps move traffic along at a much faster rate.

I’ve been reading the ’08 school budgets in the newspaper, and the amounts I see published are simply insane. … Duneland schools budgeted $62.8 million and Hobart schools around $30 million to operate. Township government isn’t the problem; your local school board is! website defamation of character

How dare the administration in the city of Gary suggest cutting 10 police patrol positions and 10 firefighter positions because of budget shortfalls. … The last thing any city does is cut public safety positions.

What do you think?