It is not often we can experience what a moment before death is like, nor would we want to.

But the evolution of smaller and higher quality video cameras has launched a fast growing ‘point of view’ media genre where you basically get to see what the participant does.

Racing is the ultimate experience for PoV (point of view) video, and as I just learned, super bike motorcycle racing is in a class by itself.

Take a motion sickness pill if needed, sit back and get ready for an experience I have never had before.

At first your senses will tell you an editor has mistakenly hit the fast forward button until you realize…oh no, they really are going this fast.

The audio from the screaming engine and the gear changes add a lot. 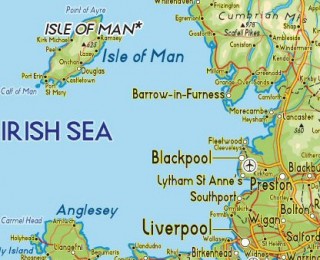 The scene of the action is the Isle of Mann’s infamous TT motorcycle race, where between 1907 and 2009…237 riders have died pitting their human skills against those of Mother Nature on the Snaefell Mountain Course.

As often happens, one of my many editor friends spotted this footage and passed it on to curious me, always looking for new and unusual material for our readers.

The term ‘blown away’ seems appropriate to describe  my reaction.

I will lead with the main HD edited piece which includes not only PoV shots but course cameras and fabulous aerial ones, and then follow up with some others that I sifted out from YouTube.

Video quality varies so be sure to check your selection button for the best.

You could never get me on one of these bikes, say as a passenger…to go out for joy ride. If you were holding a gun on me I would just go ahead and say shoot me, and then you can strap my dead body onto the bike if you want.

The average 130 mph speed I first saw in some stats, I did not grasp that that included top speeds in the 180 to 200 range. The helmet cam shots through the easy curves at high speed literally seem to give virtually no time to react.

The race requires an intimate memorization of the course where your brain has to be a 100 to 200 yards of what you can view. And as you will see, mistakes at these speeds…well, they aren’t pretty, but it is over quickly, most of the time.

I included a full run narrated piece by racing announcers so you have that professional delivery.

And then I have a top rider, Guy Martin giving a full course narration, which in his Cockney accent and talking almost as fast as the bike is going to stay up with the action, is a bit hard to understand with one pass.

I put Martin in as he has earned some air time. And there follows an interview with him about surviving crashes, including flaming ones.

It’s an intimate peak into the casual attitude they have which I thought was a perfect example of  how different these race riders were from the rest of us.

They have what the race circuit folks call ‘Steel Balls’. I am sure the UFO people love these guys the most and have taken all the best videos home to show their friends are how cool earthlings are for the promise they show pushing the boundaries back.  Enjoy. Jim.

First up is a 720 trailer HD. Be sure you click to play in the middle of the video window so you can get to YouTube and watch full screen. The music is a bit grating, but it is a hell of a warmer upper on the speeds, which are a blur with the side cameras.

An early morning practice run takes you all round the course. Remember to peak at the speedometer during the straightaways. Neil the Fish hits 187mph on mountain mile section during practice week. Riding a ZX10R followed by Crofty on a GSXR1000. The camera had a fault that was later sorted out so had to edit out one small section. 480p here.

Now for the sportscasters to add their professional observations as the racing begins. The helicopter cameras to a great job, in addition to the editing mix up helmet cams and tripod cameras along the course. This is also 720 HD.

Bad Crash here. Driver lays down but still goes into an unpadded wall had high speed.

On-board with the TT’s quickest ever recorded lap in the Senior TT 2007 race in the TT’s 100th Anniversary Year with British rider, GUY MARTIN (who provides the lap commentary), wired up with Greenlight Television’s mini-bullet-cams. Learn how to ride the Island – FAST! 480p here…a unique course run with the champion racer describing the tricks of the trade.

Guy Martin hits the wall…a heavily padded one. Shaken up a bit but walks away. 480p here.

We will wrap it up with an interview with Guy Martin on his fiery crash that is the featured image. From his description he seems to have bailed out of the bike before it hit the wall and blew up…a good move on his part. He did have to slide through the flames but the suits they wear protect from that. 360p

Catch the doll he is holding in his hands. If you did not know this was really him, would you ever believe in a million years that this was a death defying super bike racer? I wouldn’t. It’s a great lesson in how you cannot judge a book by it’s cover…and to not pre-judge people from just their appearance. Amen. Preaching over 🙂

Mass Market Retailers March 22, 2004 NEW YORK — The increasing feeling among men that good looks and good health go together is driving sales of electric razors, say experts on the category.

Men’s desire for a close shave that also treats their skin well is behind the phenomenon, say the experts, explaining that the macho appeal of a wet shave is waning as men increasingly appreciate the comfort of an electric shave.

“The razor wars are in full swing,” comments Steven George, director of marketing for Norelco Consumer Products Co., which has just launched the Cool Skin Shaving System. The system promises a shave that is as close as a blade’s but with less irritation.

“Cool Skin,” he adds, “is the latest chapter in the razor wars.” The introduction meshes with men’s heightened concern with how they look and feel, says George. Men have been freed to relate their overall well-being to their appearance in ways they never could before, he says. this web site facial hair styles

Such shows as “Queer Eye for The Straight Guy,” have exposed men’s vulnerability to not keeping up with fashions, he says.

Other evidence of the trend is the emergence of upscale barbershops and spa/boutiques for men in New York and Miami.

“That used to be the territory of women and now mainstream society is giving men permission to go there,” says George. go to web site facial hair styles

In that same vein men are increasingly purchasing skin care products for their distinctive needs. Skin care lines under the Nivea (Beiersdorf Inc.) and Neutrogena brand umbrellas are among those targeting men.

“Cool Skin plays very much into that,” George comments. “It’s about a close and comfortable shave, but it delivers an experience as well–a revitalization and rejuvenation of the skin.” The appeal of electric razors is borne out by sales data from ACNielsen. Volume of electric razors in food, drug and discount outlets excluding Wal-Mart Stores Inc. jumped 7.8% to $407 million in the year ended February 21, according to Nielsen. That is a dramatic turnaround from the prior year, when sales fell 2.3%.

Helping fuel the growth, says George, is the adventurousness of young athletes and hip-hop artists with facial hair styles.

“It’s very flexible,” he says of their experimentation. “You can have one look one day and then shave it off.” The tendency to rapidly change styles is reflected in sales of trimmers, which have grown tremendously over the past few years, George notes.

In recognition of that trend, Norelco is rolling out the AccuVac Beard & Moustache Trimmer, combining personalized trimming settings with the convenience of no cleanup.