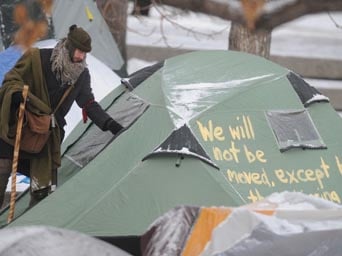 In 2011 citizens acted across international borders to establish the vanguard of a global emergency measures operation. In thousands of cities, towns and hamlets across world, men and woman organized on a massive scale, often setting up tent villages in public squares. The effort to dig in and hold ground in these citizens’ habitations signaled the resolve of the campers to gain or regain some measure of shared popular control over our public spaces and public institutions.

From the round-the-clock demonstrations in Tahrir Square, to the occupation of public places in, for instance, Madison Wisconsin, Madrid, Athens, and Wall Street, the transnationalization of political activism accelerated from slow to fast in the flash of a few news cycles. Citizens took to the Internet, to the streets, and to tent villages with surprising verve, imagination and boldness. In the tent villages the inhabitants combined experimentation in the political economy of human community with collective innovations in the art of general assembly and public protest. The personal and the political were made to merge with significant effect in ways that were met by many onslaughts of police crackdown.

One of the core ideas driving the protests was the conviction that our parliaments, legislatures, congresses, courts, and mainstream media venues have been overwhelmed by the destruction of vandals advancing interests antagonistic to the defense and promotion of the common good. Our seats of public governance have been occupied by an alien regime of corporate lobbyists, shock troops in the frontier expansion of the so-called private sector.

These corporate occupiers, the point men of crony capitalism, tend to dominate national, state and provincial capitals. They far outnumber elected officials and have massive resources at their disposal. With these resources the lobbyists and their handlers in the so-called Public Relations industry achieve commanding positions in the political cultures of the representative assembles they seek to shape, direct and harness to the purposes of their patrons.

While the methods of lobbyists are often complex their aim is simple: to advance the imperatives of private profit over those of public governance conducted to serve the public interest. The exploitation of world’s disentitled majority by its hugely entitled minority depends on the ability of corporate lobbyists to steer the policies of public officials towards outcomes that favour capital over people. Among the primary means for advancing this agenda of exploitation is to accelerate procedures for debt enslavement, union busting, business deregulation, and the continued hyperprivatization of the shared public domain.

As the private power of the so-called private sector is made to increase, the job of public servants, including that of elected officials, is increasingly reduced to that of public relations agents. Those who opt to run for electoral office are particularly prone to become beholden for favourable publicity to the media cartels whose primary function these days it is to manufacture public consent for top-down governance by ruling elites.

Band-aid reforms will not save us at this unprecedented juncture in history. Simple changes at the ballot box in the public faces of power will not be enough to change the political culture that oppresses us. The system is rigged and our institutions of self-governance can only be rehabilitated through fundamental changes in the way we structure and operate our primary institutions for making collective decisions.

As governments become increasingly subordinate to corporate masters, the odds of breakdown become greater and more imminent on virtually every frontier of natural and human-made disaster. For instance, public debt spirals to finance trillions in bailouts for the big banks. The financial sector’s accounting frauds in the deregulated generation of derivative products continue to strip viability from the real economy for the production of goods and services. Unemployment and homelessness increase even as public health care, public education and social services are axed in the name of government austerity. Military adventurism becomes unbridled while the mental atmosphere is polluted to demonize and dehumanize those targeted for attack.

Every few minutes another whole species becomes extinct. The salmon are increasingly made to go the way of the buffalo or the cod. The biodiversity of old growth forests is replaced by the narrow monocultures of tree farms. Toxic radioactivity from the Fukushima nuclear disaster spews high rates of cancer and deformity into human, plant, and animal populations across the globe. How many more Fukushima surprises await us from a privatized nuclear industry exempted by government from having to purchase insurance for its dangerous activities? How much longer will citizens tolerate being saddled with all the risk and liability from many dangerous industrial and military procedures while the profits from public investments are frequently privatized to reward friends of the government?

In 2011 it became absolutely clear that many crises were spinning out of control. Something had to be done to break the power of the cabal at the top whose runaway and unchecked crime spree in the financial sector and in the arena of warfare and torture remains for the attentive on full public display.

The unstoppable growth of tent villages of protest can be seen as expressions of the growing realization that drastic changes are necessary if humanity is to avert terrible catastrophes of many kinds. The criminal cabal in charge is obviously in no position to assume responsibility for fixing the problems they created or helped to create through their own actions and inactions. Indeed, those pulling the strings of our puppet governments seem only capable of making matters worse.

Everywhere we face blinking SOS signals. We are living through exceptionally dangerous times when many kinds of risk, some of them completely new to humanity, are bearing down hard on us. From the depths of our poisoned oceans to the heights of our blighted atmosphere, the basis of the natural economy that encompasses our humanity stands in stark conflict with the political economy of the manufactured world. Every day the natural realm is being overtaken by the manufactured realm. The unsustainable character of our life support systems in the monoculture of capitalism menaces the viability of our true sources of wellbeing as human beings enwrapped in the biological diversity of healthy ecological communities.

In the aftermath of the events 2011 many citizens the world over continue to discover the potential for innovation available in tent villages, but especially those in the heart of urban settings. The lure of these places of protest and experimentation in collective living must continue to give expression to the huge transformations taking place in the domain of human consciousness.

The changing configurations of the mental and material landscape require alterations in our means of creating and enlivening human community. By experimenting in tent villages with new expressions of urban community, new conceptions of the public interest and the common good are emerging.

The protests demonstrated the potential of creating novel forms of simplified human habitation where our physical presence in communes of shared conviction combine with our virtual presence through Internet networks of social interaction. The creation of thousands of communities devoted to the hosting of prolonged series of general assemblies introduced a new prototype of collective self-determination into the constitution of global civilization.

“This Tahrir Square movement seems to be spreading around the world… Mubrak is not an isolated phenomenon. He’s part of a worldwide system of oppression that is as real here in other ways in North America and Europe as it is in Egypt and throughout the Arab-speaking world. People can’t stand it any more and are finding ways to come to places like this square here in Edmonton. We talked about the concept of going to your civic squares all over the world, and the Tahrir Square movement being a global phenonmenon… we are in a global system, an economic system primarily that plays itself out through politics and through the military machine.”

Are the Freedom Fighters in Cairo’s Tahrir Square in the Vanguard of a Global Revolution?