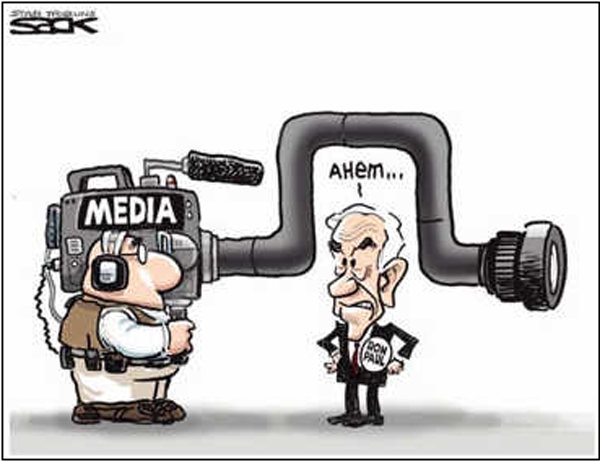 Henry Blodget of Business Insider claims he “told the truth about Ron Paul” when he said the media is right to ignore or disparage Dr. Paul, because Dr. Paul’s ideas are non-mainstream, which makes the good Doctor unelectable.  He is running a selection of emails he got in response. Unfortunately none of them succeeds in showing how ridiculous Blodget’s position actually is. So here goes:

You argue that the media has every right to ignore and/or disparage Ron Paul, because Paul’s positions are “non-mainstream” which makes him unelectable.

Your central premise is not just faulty, but absurd. Is it really the media’s business to determine what is “mainstream,” and to censor or attack anything that is not? What objective evidence determines what is “mainstream”? Public opinion polls? If so, why does the media label “mainstream” the 16% of Americans who believe the government is telling the truth about 9/11, while consigning the 84% who have doubts to the margins? (source) Obviously the media has created – not reported – the perception that 9/11 truth is “fringe” while acceptance of the official story of 9/11 is “mainstream.”

The same is even more true of Ron Paul’s foreign policy. Dr. Paul’s thesis is that the US should defend its borders, not police the world. This has been the mainstream position of the vast majority of Americans since the founding of the Republic. A tiny activist minority has labeled the majority opinion “isolationist,” and worked hard to create the perception that the minority of activists (or, to put it less kindly, warmongers) represent mainstream opinion, while the vast majority who are “isolationists” are somehow on the fringe. This mendacious project recalls the way the Bolsheviks, when they were a fringe minority, usurped the term for “majority party.” The difference is that the Bolsheviks really did become the majority party, whereas the war party in the US has always been a tiny minority that can only get its way by telling lies to the majority. (Such lies include Pearl Harbor – google “eight-point plan” – as well as Operation Northwoods, the Gulf of Tonkin, the Kuwait baby incubator hoax, 9/11, and so on.)*

Given the above, I am sure you will admit that the notion of what is “mainstream” has little to do with majority opinion. What, then, are the relevant criteria? I challenge you to produce a method, based on marshaling objective evidence, that can separate “mainstream” from “fringe” positions. Remember, there are literally thousands of issues out there; and the way each issue is framed, as well as the relative importance of each issue, is a subjective matter that varies wildly from person to person.

If you cannot produce an objective, fact-based method to determine what is “mainstream” – and I am certain that you cannot – perhaps you will admit that the media’s job is to report honestly, with fairness and balance. Specifically, in covering the election process, big media should treat all candidates equally. If candidate W is getting X percentage of votes, winning Y number of delegates, raising Z amounts of money, competing in Q number of states, etc., that candidate should be taken equally seriously as a contender based on these tangible criteria. To the extent that the candidates’ ideas are considered – a very small extent in current practice – they ought to be considered fair-mindedly, carefully and in scrupulous detail.

If the media were reporting responsibly, Paul and Romney would nearly be in a dead heat; and Paul would wear the “over-achieving underdog” mantle and be in a commanding position to win the nomination. After all, Paul won more Iowa delegates than Romney, is ahead of everybody but Romney in fund-raising, delegates, and votes, and most importantly has essentially taken over the Republican Party at the grassroots level across the nation. Finally, Dr. Paul is the only candidate with ideas that really are ideas, whether or not one agrees with them. (I personally agree with his foreign policy, but not his domestic policy.) The other candidates, by contrast, are dishing out pablum without any real substance.

The media’s attempt to destroy Dr. Paul’s candidacy, allegedly because it has some magical ability to determine what is “mainstream,” is so absurd that it raises the question: What is the real reason behind the smokescreen? I submit that the answer is obvious: The media is essentially owned and run by three overlapping special-interest groups: The Zionists, the military-industrial complex, and the big bankers who profit from massive military-spending-induced deficits.  Each of these three groups would see its pet project, and its power, collapse if Paul’s utterly mainstream foreign policy were ever implemented. That is why the media is trying to verbally assassinate Dr. Paul, while lying about its reasons for doing so.

Please consider the possibility that you have been thoughtlessly repeating a lie.

And if you disagree, please explain, with a reasonable degree of specificity, what objective criteria lie behind the “mainstream” shibboleth.

* If you somehow believe that there is a real “extremist Muslim terror threat” out there, please provide your snailmail address and I will send you a free copy of my book Questioning the War on Terror, which proves the contrary.